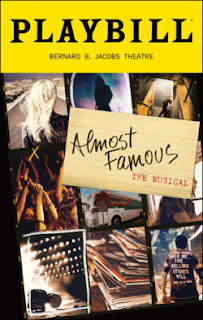 Review of the Sunday, November 13, 2022 matinee at the Bernard B. Jacobs Theatre in New York City. Starring Casey Likes, Chris Wood, Anika Larsen, Alisa Melendez, Drew Gehling and Rob Colletti. Book and lyrics by Cameron Crowe. Music and lyrics by Tom Kitt. Scenic and video design by Derek McLane. Costume design by David Zinn. Lighting design by Natasha Katz. Sound design by Peter Hylenski. Choreography by Sarah O'Gleby. Direction by Jeremy Herrin. 2 hours and 30 minutes, including one intermission.
Grade: A+
Over the years, I've grown pretty tired of the film to stage pipeline. It is the rare occasion when a super popular film ends up being an awesome new musical (looking at you, Legally Blonde). On the other hand, smaller, lesser known movies seem to have a much better chance of being amazing (looking at you, The Band's Visit, Once, Hairspray...). Almost Famous falls into the latter category; the property is completely new to me, so I went into it with fresh eyes, seeing it only as a piece of musical theater. And it certainly is both awesome and amazing. 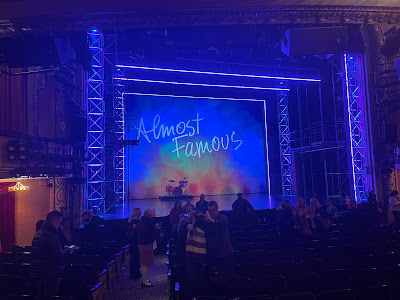 The show flew by - I was completely captivated - thanks in large part to the cinematic flow of the production. Director Jeremy Herrin uses some slick scene transitions that fit each scene specifically, and are carefully character-driven. Similarly, Sarah O'Gleby takes full advantage of the high octane rock and roll vibe of the piece (not to mention the hippie-mellow feel of 1973) in her choreography, which often blends in seamlessly with Herrin's staging. That flow is also integral to the technical elements as well. The set pieces and colorful, morphing projections by Derek McLane glide in and out in ways that are clever, but always in service of the story. A scene toward the end of the show is a perfect example: it is an urgent, tumultuous moment, made even more exciting by a series of constantly moving doors. David Zinn's period costume design is spot on, including a dizzying array of vintage concert shirts, hot pants, and denim in various forms. Lighting designer Natasha Katz has really brought her A-game this time around - traditional stage lighting, rock concert lighting, and ethereal mood lighting comes and goes without intruding and is always in service to the show.
The score has achieved the rarest feat of this type of thing: the original songs and preexisting songs blend together so beautifully, there is never that "ah ha!" moment when you recognize one. This anti-Moulin Rouge effect really adds to constant momentum. Even with act one closer, "Tiny Dancer," I found myself more impressed with how it was sung and staged than the fact that it popped up. Most, if not all, of the credit for this surely lies with the expertise of Tom Kitt's gorgeous orchestrations, as well as his music for all of the original songs. Much like his work with American Idiot, he has elevated the whole affair. Equally impressive, though not surprising, are the clever lyrics and book by Cameron Crowe, who famously wrote, produced and directed the semi-autobiographical film.
As wonderful as the whole production is to look at and listen to, the true wonder is the thrilling cast, all of whom make interesting contributions to the performance. Their energy is infectious, their commitment is inspiring. The ensemblists play several characters and include such standouts as Van Hughes, Libby Winters, Emily Schultheis and Jakeim Hart. The fun, sexy groupies - aka the Band-Aids - are brought to vibrant life by the enchanting Katie Ladner (as Sapphire), Jada Dejenne Jackson (Polexia) and Julia Cassandra (Estrella).
Stillwater is the band on the cusp of stardom, and as both a group and individually, the guys manage to be both a loving tribute to and a comic send-up of such real-life musicians. It works so well because each actor understands this. Gerard Canonico (as band manager Dick Roswell), Brandon Contreras (Silent Ed Vallencourt) and Matt Bittner (Larry Fellows) are having a ball and it shows. More central to the conflict that threaten's the group future are Russell Hammond (Chris Wood) and Jeff Bebe (Drew Gehling), both passionate about their craft but with clashing expectations. Wood imbues this hard partying rock star with an intoxicating blend of aloofness and sex appeal. He's one of those performers who rivet your attention. Gehling fully embraces the seventies rock star in a fierce and funny turn. Both men are magnificent.
As the narrator/mentor/Creem magazine editor, Rob Colletti makes abrasiveness hilarious and obscenity endearing. Then there's Anika Larsen as the lone parental figure, making over-protectiveness charming and being sorely out of touch with her children humorous. She shines throughout, but her act two song/monologue brings down the house, and her moment in the fully staged bows is one for the record books. 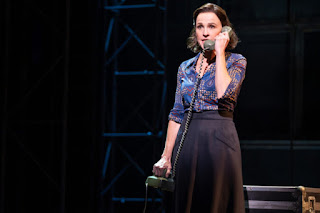 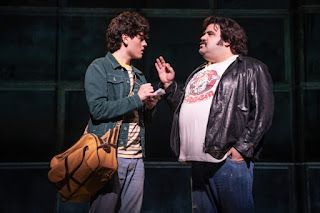 Anika Larsen, Casey Likes and Rob Colletti
In the role of Penny Lane we had the great fortune of seeing Alisa Melendez make her Broadway debut. You'd never know the role wasn't her own, so at ease and in the moment was she. What a voice! What a range of emotion! It was truly an honor to share that life-changing experience with her. She's going to be famous. 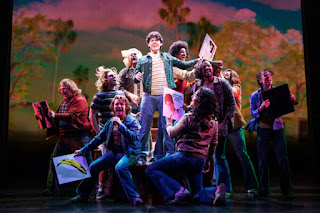 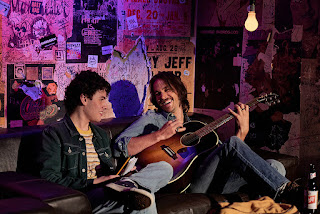 Casey Likes and Company (left); Casey Likes and Chris Wood
All of that said, the real star of the night was young Casey Likes in his Broadway debut as the child prodigy  coming of age. Yet another exciting product of the Jimmy Awards, his talents are obvious and plentiful. Singing, dancing and shedding tears (sometimes all at the same time) this young man is a wonder. I'm sure this will be just the first of many leading roles for him, and I can't wait to be there for each.
I've said before that after nearly 40 years of Broadway shows, it takes a bit more to give me that feeling of true exhilaration and bliss of seeing an exceptional show. Almost Famous had me walking out of the Jacobs Theatre on the proverbial cloud. It's that good. No "almost" about it.
📸: J. Kyler, M. Murphy, K. Schlueter
Posted by JK at 6:43 AM