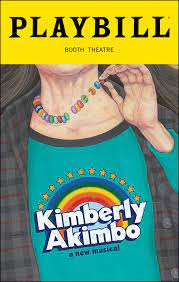 Review of the Saturday, October 29, 2022 matinee preview performance at the Booth Theatre in New York City. Starring Victoria Clark, Justin Cooley, Bonnie Milligan, Steven Boyer, Alli Mauzey. Book and lyrics by David Lindsay-Abaire, based on his play. Music by Jeanine Tesori. Scenic design by David Zinn. Costume design by Sarah Laux. Lighting design by Jeanette Oi-Suk Yew. Sound design by Kai Harada. Choreography by Danny Mefford. Direction by Jessica Stone. 2 hours, 30 minutes including one intermission.
Grade: A+
"Laughter through tears is my favorite emotion," says Truvy in Steel Magnolias. I couldn't agree more, and so I was thrilled with the bittersweet emotional roller coaster that is Kimberly Akimbo which opened last night on Broadway. With the musical, based on his play of the same title, David Lindsay-Abaire has retained all of the charm and laughs, while expanding the emotional complexities of the characters through his book and impactful lyrics. Meanwhile, Jeanine Tesori once again proves she is a musical chameleon, nailing the late 90's sound and creating a musical basis for each character. Do any of her shows sound the same? 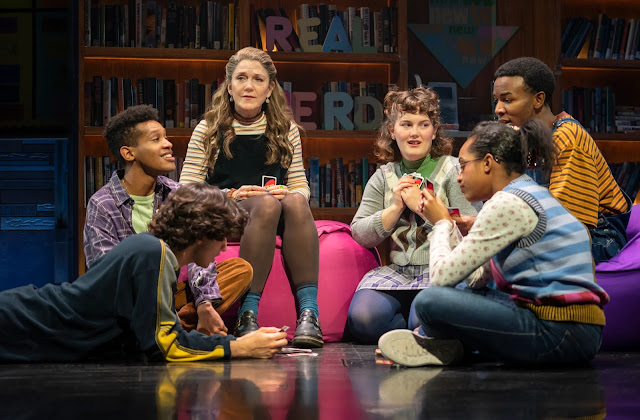 The Booth Theatre is the perfect venue for this little gem; the show fills the stage when need be, and keeps it intimate just as deftly. Thanks to David Zinn's very detailed settings that glide in and out (and occasionally tuck away), Jeanette Oi-Suk Yew's specific lighting, and Sarah Laux's delightfully quirky, character-driven costumes, the design elements enhance the piece without ever getting in the way. Kudos, too, to Kai Harada's perfect sound design. No this isn't a big, splashy extravaganza, and the show is all the better for the restraint.
Danny Mefford keeps things character-centric with choreography that shows individuality, and snazzy show choir moves, usually at once. Aside from the stellar cast - more on them in a sec - the star of the show is really actress-turned-director Jessica Stone, who helms this show with a light touch, smartly letting the show guide her choices. She is equally adept at staging small moments as she is with frenetic ones. Her elegant use of a turntable allows us to see everyone in a tense dinner conversation, while a certain economy of movement makes an elaborate number about committing a crime allows for sharp physical comedy. What a Broadway debut for her - she's one to watch for! 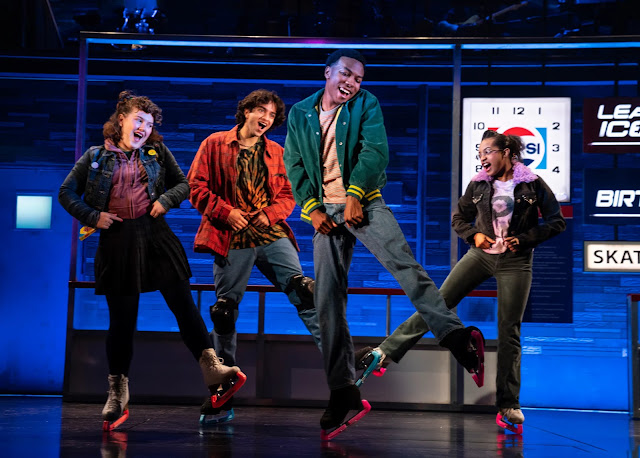 But the biggest reason to see this wonder of a musical is the nine member company. Not a weak link among them, from top to bottom they are aces.The four actors (three making their Broadway debuts) who make up the ensemble of high school misfits - a geek squad, if you will - give me hope for the future of the Broadway musical. With few words, fun dance moves, and very specific characterizations, Olivia Elease Hardy, Fernell Hogan, Michael Iskander and Nina White, are a Greek chorus to be reckoned with. 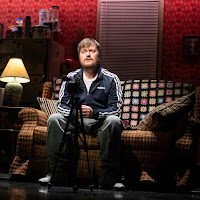 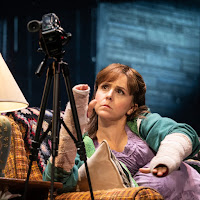 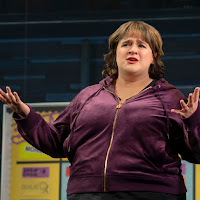 Kimberly's family is a hot mess, almost making her debilitating and tragic sickness the least of her worries. Hilariously and pitifully white-trash, each are perfectly cast: Steven Boyer, the alcoholic dad who tries, but never quite gets there; Alli Mauzey, the narcissistic mom, pregnant again and scared to death; and Bonnie Milligan, the larger than life aunt, and so bad the family moves around just to get away from her. They are all by turns bat-shit crazy, morally appalling, and complex in ways that are surprisingly heartwarming. Each has stand out moments, with Ms. Milligan blowing the roof off the theater with what has become the riotous breakout song from the show, "Better." Ms. Mauzey has a beautiful introspective moment with "Father Time." (Cue the tears.)
Broadway newcomer (with the finesse of a well-seasoned veteran) Justin Cooley dazzles with his utterly sweet characterization of anagram-loving band geek, Seth. He knows he's an outcast in the high school hierarchy, cringe-y in his awkwardness, and empowered by his ability to embrace it all. He's a good kid who you know will be a sought after friend in college and after. Cooley walks a tightrope between awareness and complete oblivion, making the evolution of Seth's new friendship with Kimberly both inevitable and surprising. Best of all, his chemistry with her is all charm, and pleasantly not awkward at all. (Cue the tears.) Mark my words: Mr. Cooley is going to be a huge star. 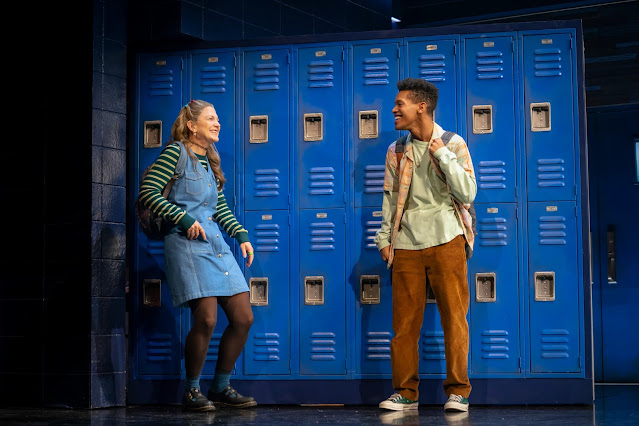 For all intents and purposes, the great Victoria Clark is really a teenager - the way she moves, gestures, stands, sits... all of it is so accurate you'd swear you were watching an adolescent becoming an adult, not an aging woman knowing death is on the horizon. So convincing is her performance as the titular Kimberly, that the audience's sharp gasp when she comes in dressed as a grandma said more than the rapturous applause she earns at the curtain call. Her ability to navigate a labyrinth of emotions with the most specific of details and larger than life gestures is inspiring. This is a brilliant performance, more than award-worthy.
There is a moment just seconds before the final blackout that wordlessly captures the utter joy of life. You laugh and smile knowingly. Then it hits you. Kimberly is getting older.  Laughter through tears, indeed.
📸: J. Marcus
Posted by JK at 6:47 AM