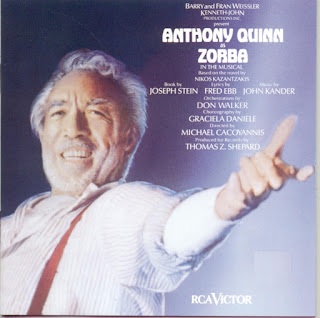 I was looking through my vinyl collection the other day, and came across my copy of the 1983 "New Broadway Cast recording" of Zorba. I had seen the show during its national tour, which starred the revival's two headliners, Anthony Quinn and Tony-winner Lila Kedrova. Both were utterly charming, with Kedrova stealing the show with her every number. They were a big draw due to their starring in the film version, Zorba the Greek. But for me, the score was the star of the show. Even including their flops, you rarely (if ever) hear talk of this Kander and Ebb score. For me, it is one of their best - a wonderful mix of songs, orchestrated to include traditional Greek instruments that lend to the authentic sound of the show. I highly recommend this one!
Track By Track:
Zorba The New Broadway Cast Recording

Act One
Track 1: Life Is *****
"Life is what you do til the moment you die." As usual, Kander and Ebb have created an exhilarating, scene-setting opening. Sage advice spills forth from the enigmatically named The Woman (brilliantly sung throughout by Debbie Shapiro). It also sets the theme for the evening: Death is coming, so live life while you can.
Track 2: The First Time ***
"I sniff at a woman...each time is the first time!" Anthony Quinn, while certainly no great singer, is captivating. Zorba the Greek's philosophy of life? Treat each life experience as a first time, unique, potentially life-changing event.
Track 3: The Top of the Hill ****
"There's a woman at the door to a room in a house at the top of the hill, and she's waiting for you." The way this song builds and introduces a community reminds me a great deal of Kiss of the Spider Woman's "Over the Wall." Catchy, vibrant and a great way to give a star her entrance!
Track 4: No Boom Boom ****
"Please, Sir, no Boom Boom!" Charming code for a consort is the fun key to this number, a toe-tapper of a story song. But don't be so taken in that you miss the point that even though Hortense (Lila Kedrova) has had her share of men, she was always in control. 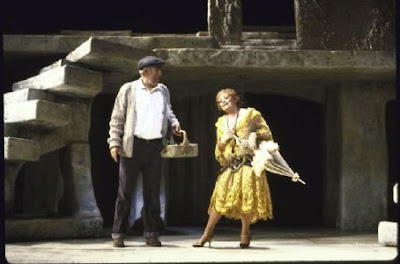 Track 5: Mine Song ***
"The sound in your ear is the sound of tomorrow." The business of the village, mining, is the toil and the pride of the community. The vocal arrangement of this song is thrilling.
Track 6: The Butterfly *****
"No too fast. Let it grow. Let it last." One of the most beautiful songs in the entire Kander and Ebb oeuvre, this song is a stunning metaphor for the precarious line between life and death. Robert Westenberg, Nikos, sings with power and gentleness, and acts the song with the same power and gentleness. The final verse, a stunning trio for him, Shapiro and Taro Mayer, the Widow.
Track 7: Goodbye, Carnavaro ***
"Don't forget me!" The verbal game play here between Zorba ("Carnavaro") and Hortense  ("Boombalina") allows the very palpable chemistry between Quinn and Kedrova to flow right through the speakers.
Track 8: Grandpapa ***
"Weak and feeble Grandpapa." When the villagers doubt Zorba's, um, stamina, he proves that he may look like a grandpapa on the outside, but he still has the moves. The star here is the orchestra in a vigorous dance.
Track 9: Only Love/The Bend of the Road/Only Love (reprise) *****
"Give me love. Only love. What else is there?" The Act One closer is a blend of two great numbers - the heartbreaking "Only Love," which shows why Ms. Kedrova won a Tony, and "The Bend of the Road," really a reprise of "The Top of The Hill." This time, The Woman is bringing together the young couple, Nikos and the Widow. Life is, it seems, an endless cycle of love and lovers. 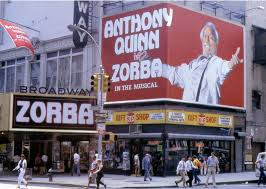 Act Two
Track 10: Yassou ****
"Exchange the rings and drink the wine! Yassou! Amen!" A quick wedding starts the act, but tragedy isn't far behind...
Track 11: Woman ****
"Woman." Zorba offers his philosophy on his favorite topic.
Track 12: Why Can't I Speak/That's a Beginning *****
"Why can't I speak? Why can't I show him?" "And who can say where it may end?" Two songs in counterpoint offering two points of view of one encounter and the beginning of a true love. Mayer and Westenberg are just wonderful here. The last 30 seconds give me goosebumps. 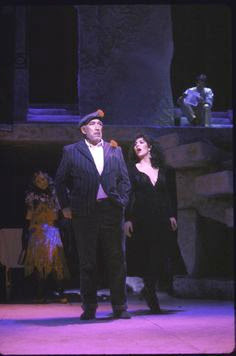 Track 13: The Crow *****
"Soon we will see the crow fall from the sky...What doesn't die never was born." Another fable to offer insight to an impending death. Dramatic and urgent, the recording is as dramatic as the staging. Shapiro is breathtaking.
Track 14: Happy Birthday *****
"You'll dance through life. All through life." As Hortense begins to transition, she hallucinates a joyous memory - her 16th birthday celebrated with her mother. So sorrowful even as the music is jaunty. The final moments of this song bring me to tears.
Track 15: I Am Free/Finale: Life Is (reprise) *****
"I have nothing. I want nothing. I am free." Having been through another tragedy, Zorba offers his final story, and the one philosophy that gets him through life. "I live as if I might die any minute!"
#2504
Posted by JK at 7:00 AM