I have long held a fascination with Anyone Can Whistle. The Original Cast Recording was the second Sondheim album I ever bought (Sweeney Todd was the first). And, like most Sondheim shows, it was a lot to take in, and the synopsis offered little help. But I loved the weird sound of it, and the task of trying to unravel the puzzle of the lyrics. "Simple" remains a favorite enigma of mine. Each subsequent recording only added to the mystery and the fun. The CD release of the OBCR offered nicer sound and bonus tracks, while the Carnegie Hall Concert recording offered new takes on familiar tunes and even more music. (Bernadette Peters and Scott Bakula were particularly charming, and I wish Angela Lansbury had reprised her role instead of just narrating.)
CD Review:
Jay Records' Anyone Can Whistle 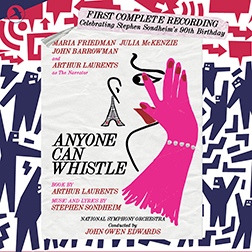 Now, 23 years after they began recording it, Jay Records has finally released the ultimate recording for true fans, one the purports to contain every note of music from the production. On two discs that run just under two hours, you really do get it all. In addition to the songs, there are overtures/preludes, incidental music (one assumes they accompanied scene changes) and underscoring. Throughout, there is plenty of dialogue to help put the story together, and even snippets of narration provided by book writer Arthur Laurents himself.
Let me say from the outset, that this is a superlative recording. The quality is absolutely first-rate. The National Symphony Orchestra brings a fullness and vitality to the music that has heretofore been largely missing. Of course, that's no slight or fault to the original as recording methods and quality have exponentially improved since 1964. The ensemble of 26 certainly adds to the group numbers, and sings beautifully. The supporting cast of 13 provides very well-defined characters - no small achievement given the chaos of the book. The three principals, some of Britain's most accomplished musical theater artists also do well, though I'll admit I had to listen more than once to warm up to Julia McKenzie's villainous Mayoress Cooper, and though she'll never match Angela Lansbury in my estimation, she really is quite good. John Barrowman also sings his role - the pretend Doctor Hapgood - well, and his acting is fine. Truth be told, any number of actors could have done as well, if not better. The best of the three by far is Maria Friedman, who, as Fay Apple, is a heady mix of insecurity, indignation and coy sophistication. She pretty much oozes charm right out of the speakers, and her voice is wonderful. 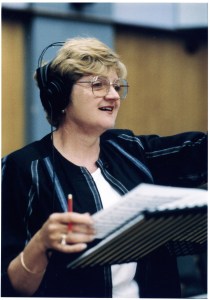 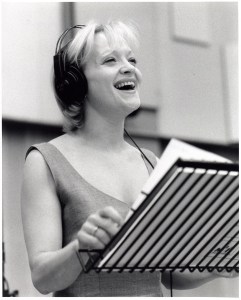 Julia McKenzie & Maria Friedman
The booklet that comes with the CD version offers a very detailed synopsis, and a terrific essay. That essay, which details how relevant Whistle is to our current times, is particularly interesting to me, as when Mike and I were listening to it, we kept pointing out specific lines and themes that sounded very Trump era/alternative facts/anti-science. Over and over, we kept saying that this show, with some fine tuning of the book, could certainly make a poignant parable for the decade in which we live. How cool to open the booklet and find such validation.

Ultimately, this should come as no surprise to Sondheim fans and musical theater fans/scholars: Anyone Can Whistle 57 years ago was way ahead of its time. And the fact that the story and themes seem "ripped from today's headlines" makes it ripe for revival and a full production. Adding to this new awareness is that the show is a meshing of modern themes and sound, and roots firmly in old school musical theater with its three act structure and use of ballets to extend and comment on the story.
We've waited nearly a quarter century for a full recording. Hopefully, we won't have to wait too much longer for a full scale revival. On the other hand, anything we get is really a bonus. How many shows that ran 9 performances get this much attention?
#2500
Posted by JK at 7:00 AM