At This Performance: Jessica Phillips in Next to Normal 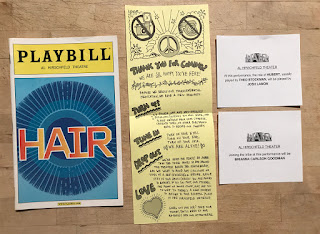 New Series! We've all been there. You've waited months to see a show, and you've heard constant raves about a particular performer in that show. Then one of two things happens: either you manage to catch a quick glimpse of the cast board before you surf the crowd into the seating area, or you get your Playbill from the usher, and little white squares of paper float down to the floor. Either way, an understudy (or several) are on - including the one you were dying to see.
At This Performance...
Jessica Phillips in Next to Normal
In nearly forty years (!) of seeing Broadway shows, I can honestly say that I have rarely been disappointed by an understudy. More than once, I've even preferred the understudy to the regular performer. Most of the time, though, I think they are equally awesome. Such is the case with that time I went to see Alice Ripley in Next to Normal, and instead I got the little slip that said, "At This Performance the role of Diana  will be played by Jessica Phillips."
Now, at this point, I had been fortunate to have seen Ms. Ripley several times, and the show had already cemented its place on my short list of favorite musicals of all time. So, I was feeling I had nothing to lose and only a chance to gain. Maybe I'd be afforded the chance to follow a different character more closely since I wouldn't be completely riveted to Alice's intensity. Or maybe Jessica would offer a different, interesting take on the role.
Fast forward to the curtain call, where we were all on our feet, screaming our "brava"s at the stage when she took her bow, and the tears, as always, were rolling down my cheeks. Ms. Phillips was brilliant in the role from start to finish. I'm pretty sure I forgot she was an understudy around the time she put the first slice of bread on the floor. What I appreciated was that she didn't try to replicate Alice's take on Diana. Rather, she was slightly more subdued, playing each moment in a a way that gave all of us a little room to breathe between episodes. In turn, her performance built and built and ended up plowing right through our hearts.
After the show, with a little time before I had to head home, I decided to hang out in Shubert Alley and watched the crowd get autographs from the cast. Ms. Phillips came out last, and the crows was dissipating, so I thought I'd take the chance to offer my personal congratulations. So I stood at the end of the barrier, and when she got to me I was last. We had a wonderful chat about her take on the role, and about mental illness in general. She was sweet, and I had a new Broadway actor to follow.
How do you like this new series? Let us know via Twitter or email (info above), and feel free to share your understudy experiences!
#2490
Posted by JK at 7:00 AM

Labels: At This Performance, Jessica Phillips, next to normal