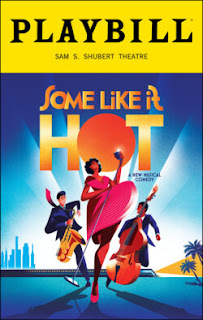 Traditional musical comedy fans can rejoice - Some Like It Hot is old school in all the right ways. Its big, splashy dance numbers, spectacular costumes, jaw-dropping sets and a genuinely funny book should keep the Shubert Theatre occupied for quite awhile. This latest in the parade of film-to-musical shows certainly gives you your money's worth. And it is just modern enough in its thinking to keep those keeping track of such things reasonably happy.

The book by Mathew Lopez and Amber Ruffin is pretty tight, chock full of clever quips, zingers and a big dollop of heart. They also address the elephant in the room with sensitivity and intelligence. That age-old trope of men in dresses is here, of course, but with a comfortable (if still imperfect) handling. Yes, the conceit still goes for laughs, but evolves here as the men each make different self-discoveries while in disguise. Born of desperation and self-preservation, the two men don dresses in order to evade gangsters, and in the process get some education. Joe (Christian Borle) as Josephine learns empathy and a better understanding of how women navigate a largely misogynistic America, falling in love along the way. Meanwhile, Jerry (J. Harrison Ghee), in the guise of Daphne, goes on a journey of self-discovery, self-love, and self-acceptance. In short, Hot gives it to us both ways, and leaves us with a lovely happy ending. 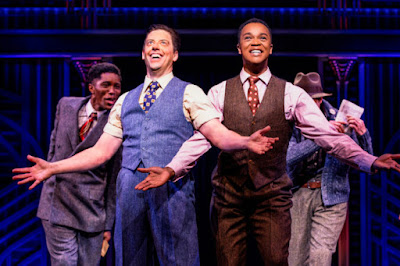 We caught the show very early in previews, so perhaps the biggest detriment to the piece has been resolved: it dragged in a few places and felt about 20 minutes too long. As I said, it really isn't the trim book that is the issue. Instead, and it surprises me to even say it, there is simply too much music. Composers Marc Shaiman and Scott Wittman, two of the best in the biz, have brought their A game here, with a jazzy score ranging from clever production numbers to smoldering torch songs. The surprise here is that by the end of the evening, they all blend together to a point that one is conscious of the repetition of themes and styles. What is good here is really great - I'll buy the cast recording just to have the title song at my fingertips, as well as Sugar's introductory number, "A Darker Shade of Blue," and Daphne's epiphany, "You Coulda Knocked Me Over with a Feather." But by and large, the rest of the score is a blur of diminishing returns.

Adding to the length of the proceedings is the abundance of big dance numbers. Of course, what would an old-fashioned show like this be without dancing? But does every number have to last so long? Casey Nicholaw is a fabulous choreographer. No one around today does tap on Broadway like him. That said, if he even trimmed just two minutes off each number, the whole thing would be so much better; instead, the sheer quantity of it starts to feel repetitive. Or maybe if a couple of the several "club numbers" were simply cut... 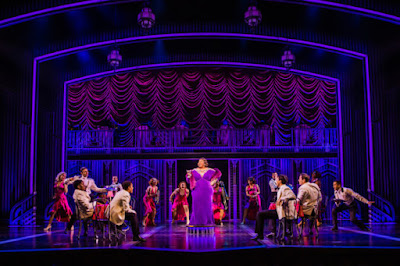 Despite everything I just said, Some Like It Hot is a stunner in many ways. Nicholaw's staging deftly navigates an array of scene changes and styles from an astonishing door-slamming farce number to quiet, dramatic bits that ground the show and give it its heart. He creates truly lovely stage pictures at every turn, and his synchronicity with the design team makes for a seamless package. Throughout, Scott Pask's elaborate sets garnered gasps and well-deserved applause all by themselves. (I wonder where they put it all backstage!) Similarly, Gregg Barnes' dazzling array of costumes - including a shocking quantity of fancy footwear - are a feast for the eyes, and the always terrific lighting by Natasha Katz adds mood and glamour to the whole affair.

The first rate cast excels - including a large ensemble of superb, tireless dancers - with most given opportunities for bits that give them a deserved moment to shine. The all-girl traveling band is fabulous and always character-driven (even if they aren't actually playing their instruments), and several of our Broadway favorites - including Angie Schworer, Casey Garvin, K.J. Hippensteel and Gaby Campo - bring their signature zest and sex appeal. Adam Heller and Mark Lotito, Broadway vets both, make a meal out of the stock characters of grizzled detective and gangster boss, respectively. 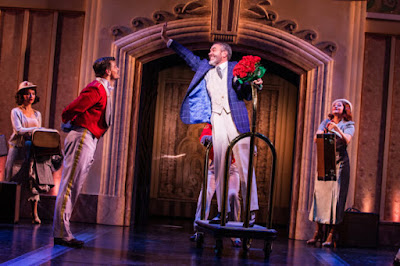 NaTasha Yvette Williams, scene-stealer extraordinaire, practically blows the roof off the place with her jazzy growl of a voice! Her seen-it-all-but-still-sassy band leader role fits her like a glove, and takes everything up a notch just by being on stage. Perhaps my favorite supporting character performance of the season so far is Kevin Del Aguila. He's come a long way from Frozen, and what a pleasure to see him really get a chance to take off in a quirky and hilarious role. You can tell that he loves every minute of it, and we love him for it. His character's chemistry with Daphne is palpable and wholly satisfying.

Of the trio of leads, Christian Borle feels the weakest. I'm a big fan of his, so it pains me to say that as good as he is, he seems the least comfortable on stage, in or out of a dress. Perhaps he needs to be in the part a bit longer. There was a certain stiffness and preciseness to his performance: he hit every mark, landed every joke, and danced each step perfectly, yet it felt rote and too accurate. None of this detracted from the proceedings really, but it sure is noticeable when he's up against two powerhouses like his co-stars. Adrianna Hicks (below) will surely have a lengthy career as leading lady if she so chooses. Straight off her spectacular turn as a Six queen, Ms. Hicks is even more spectacular as chanteuse Sugar, radiating with star power with every entrance, note and word. She, quite simply, can do it all. Brava! 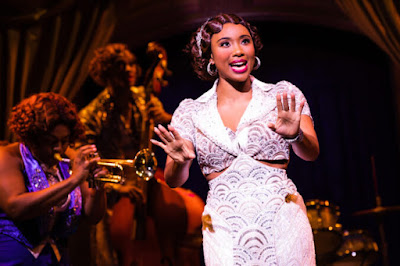 But the biggest and best asset of the whole production is the dazzling J. Harrison Ghee who can make the most hardened soul in the house melt like butter with one gaze, one turn of the heel, one megawatt smile. They single-handedly put the kibosh on that tired and troublesome guy in a gown thing. Watching their Jerry transform into Daphne is a marvel that will bring a smile and a tear of joy. Their mastery of song and dance feels like a given as effortless as they are, but the heart and compassion they clearly feel for the role is the true marvel.
How you feel about how the problematic trope is handled is up to you of course. But I suggest you see Some Like It Hot before you simply write it off.
📸: M. Franklin
Posted by JK at 8:11 PM