It was recently announced that Michael C. Hall has extended his run in Hedwig and the Angry Inch by an additional two weeks.  After having seen the show this past weekend, I must urge you strongly to take advantage of those extra chances to see one of the most electrifying performances currently on Broadway.

I won't waste your time discussing the physical production or the direction, as I've pretty much said it all in my two previous reviews of the show (click the links to your left to see those).  Instead, let me share a few a few thoughts on the cast. 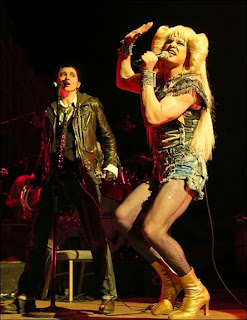 Maybe it's that this was my third time, but I really noticed The Angry Inch's part in all of the show.  Though mostly silent, and mostly concentrating on the music, these guys have developed nicely individualized characters.  When you go, notice the interplay between them, and how they react and respond to Hedwig - and how compelling their wordless but palpable relationship is with Yitzhak.  And so, kudos to Justin Craig, Matt Duncan, Tim Mislock and Peter Yanowitz, four amazing musicians and pretty decent actors, too.

I am thrilled to find that not only is Tony winner Lena Hall as enticing and exciting as ever, but she has also grown in her role, plumbing it for new depth and nuance.  Her vocals remain gritty and jaw-dropping - her range is incredible.  But there is also a more clear sense of a power struggle between Yitzhak and Hedwig, not just in the obvious parts of the plot, but in the more subversive give and take, love and hate between the two.  Her blocking has not changed, and yet every move Ms. Hall makes seems to have taken on new purpose.  It feels like she is, at last, not second banana to a force of entertainment nature, but rather a significant partner and adversary rolled into one.  This is an important and very gratifying turn of events, born out of necessity in being paired with a much deeper performer these days.

I'm not knocking the much revered performance of Mr. Harris (I did not see Mr. Rannells), as it was a valid, if very "Broadway" performance in that I'll-do-everything-I-can-to-give-the-audience-exactly-what-they-want-in-a-musical way.  As I mentioned in both of my reviews of the original star, I never felt like I was seeing a different character, but rather a Tony host in Farrah wig and a spotty-at-best German accent.  Charisma made that performance and the show accessible to the most standard of Broadway fans. 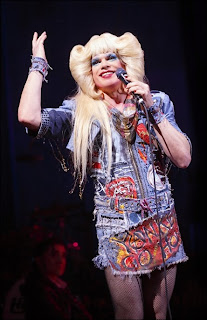 Michael C. Hall, in my opinion, is a vastly better actor to begin with, and man of wide-ranging abilities, whose body of work reveals a daring performer who manages to make even throw away lines significant.  Here, it is obvious that the man belongs on a stage, feeding off the thrill of live performing - a trait he shares with the character he's playing.  But the real thrill of this magnetic and impressive performance, for me, is in the details.  Hall does not aim to please every second of the show - he ebbs and flows just as Hedwig herself does, indulging in selfish moments as often as giving ones.  He has also given much more emotional weight to every choice he makes. These aren't just clever word play and pithy commentary bits.  Even as she tries to hide her feelings with self-deprecating humor, or when she indulges in moments of self-pity and self-loathing, Hall makes sure that Hedwig's immense sadness and startling signs of optimism are never far from the surface.  There's calm and there's anger; there's epiphany and sacrifice.

With Mr. Hall's brilliant interpretation and Ms. Hall's continued evolution in a career-defining star turn, there's a Hedwig that is as entertaining as ever, but also a more compelling, satisfyingly complete musical.  At last, I can see what all the fuss is about and why this is, as advertised, an important piece of art.