In many ways, the four months since I last visited this "revisal" of Side Show, nothing has really changed all that much. There are no giant cuts or additions or rearrangements of scenes. And while I think it is fair to say that this final version of this piece has not repaired all of its faults - real or perceived, I can say that in a lot of ways, these four months have been well spent by all involved.  (My review of the D.C. production HERE.) As it stands, the work on the details and tone have paid off handsomely, and what is currently onstage at the St. James Theatre is a mostly engrossing, frequently moving and ultimately thrilling piece. 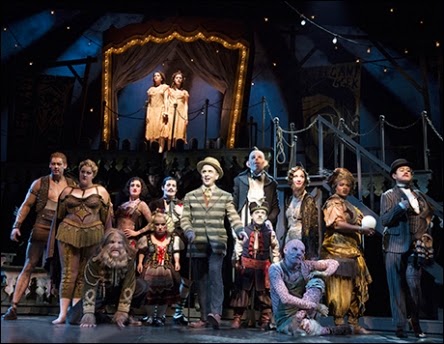 The biggest issue I had with the show during its D.C. tryout, that big flashback scene, remains.  Truth be told, it is somehow tighter and more engrossing despite the fact that it pretty much stops the flow of the story.  I still think it might have been better placed elsewhere if it must be kept.  And I just don't understand why they introduce an element that could have deepened the connection between the twins and the audience - showing us the mind "trick" Harry Houdini teaches the girls - then never address it again.  Clearly, the writers feel this is an important event.  The show notes in the Playbill even discuss that very thing.  It is a frustrating missed opportunity.  Even so, it provides some interesting information and sly commentary, and it is beautifully staged.  Its theatricality - swirling scenes appear and vanish, the dramatic use of shadows - is visually appealing.

Happily, other issues have been addressed even more successfully.  The sound (by Peter Hylinski) is as clear as a bell, with the balance between orchestra and onstage company perfectly mixed.  Anthony Van Laast's choreography has been polished and heightened. (The addition of more chorus boys makes "Ready to Play" a much more showy and exciting "debut" number for the twins.)  Overall, Van Laast and director Bill Condon have sharpened the whole affair, making it more urgent and contemporary while maintaining the authentic period feel of the story. 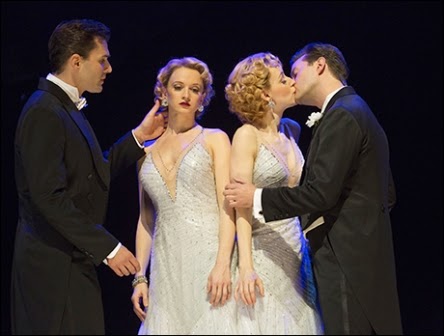 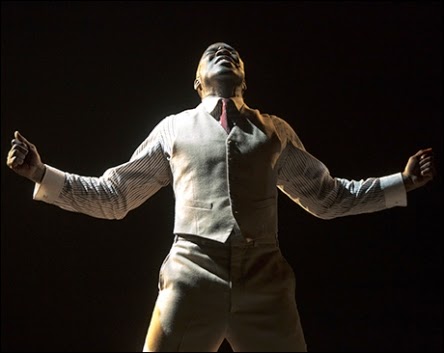 The performances have also become more focused and intense.  Time together and the opportunity to perform the show regularly has really made the ensemble gel nicely, as each remains individual and yet seems to be more of a "family."  The leading men, who were already doing fine work before, have really brought their A game here, as well.  Both Ryan Silverman and Matthew Hydzik have made their characters much more compelling.  Their back-to-back numbers have really boosted the entire second half of the show.  I'm happy to report that David St. Louis has sharpened and leveled off his take on the protective Jake.  He's much less over the top, and his singing is just terrific.  "You Should Be Loved" has once again become a highlight. 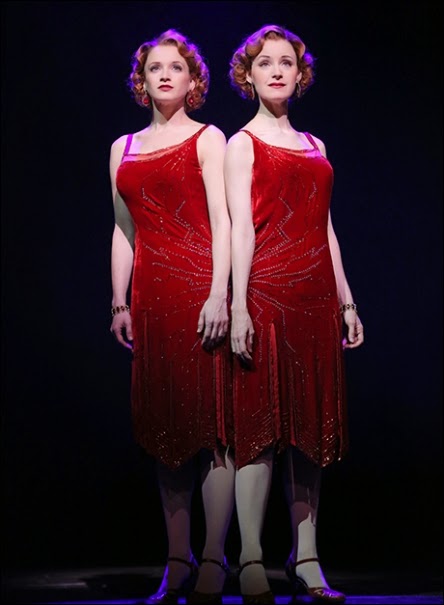 Of course, the best thing about this revival is still the riveting presence of the Hilton sisters as played by Erin Davie and Emily Padgett.  It is truly difficult to keep your eyes off of them.  Like the rest of the show, they, too, have added much to their already amazing performances, with even more small details that work to show them off as singular girls and a by-necessity remarkable whole with a special bond.  I especially appreciate that they both (and their director) have taken great care to remain true to the period and spirit of the show by not succumbing to the easy temptation of modernizing their vocals.  They are appropriately show-bizzy in their vaudeville numbers, introspective in their "story numbers," and belt out their big ballads with an old-fashioned sincerity.  Both "Who Will Love Me As I Am?" and "I Will Never Leave You" benefit from powerful, heartfelt renditions rather than the more obvious histrionic belting so en vogue these days.  The songs and the ladies who sing them stop the show.

I'd love to be able to say that I've completely forgotten the original production, still an all-time favorite of mine.  Shows that are more conceptual and raw will always appeal to me more than more literally told tales.   But I love this version in ways that I didn't expect I ever would or could. To me, that is what going to the theatre is all about.


(Photos by Joan Marcus)
Don't forget to vote in this week's HOT or NOT poll, featuring the cast of Side Show!