This week’s entry is about the 1975 Original Broadway Cast Recording of Chicago.

Like many people, I first became familiar with Chicago through the 2002 Oscar-winning film and, especially, its soundtrack recording. As I was listening to this Broadway recording, I couldn’t help but compare its content and performances to the newer version more familiar to me. Accordingly, I’m arranging this entry as a comparison between the two recordings, indicating my personal preference for each of the various elements. 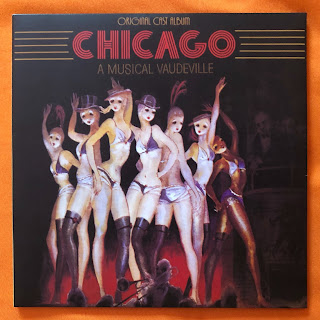 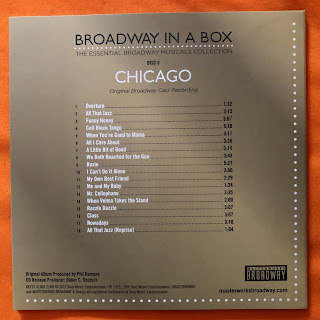 Chita Rivera is one of two performers on this CD that are probably impossible to top. From the first notes of “All That Jazz,” her singing is rich and character-driven, and I hear she danced the part pretty well. I very much enjoyed Catherine Zeta-Jones’ take on this part, but it’s unfair to expect her to live up to a legendary Broadway triple-threat.

Well, maybe I shouldn’t have spoken so soon! Gwen Verdon is an equally legendary Broadway triple-threat, but there’s something about this particular interpretation that, at least on an audio recording, doesn’t measure up to Renée Zellweger’s juicy take. Verdon is surely a better singer, but her fluttery vocals don’t quite do it for me in this performance. Zellwegger also does a better job making you believe that anyone would believe that she’s an innocent bumpkin - note the contrast between her demeanor in “Funny Honey” and “Roxie.”

Jerry Orbach sings the part in a way that is attractive while conveying his essential cynicism. His vocal acting (for lack of a better term) is at least as good as Richard Gere’s in “We Both Reached for the Gun,” but his more legitimate singing is leagues ahead in songs like “All I Care About.” This is another performance that no one is likely to beat anytime soon. 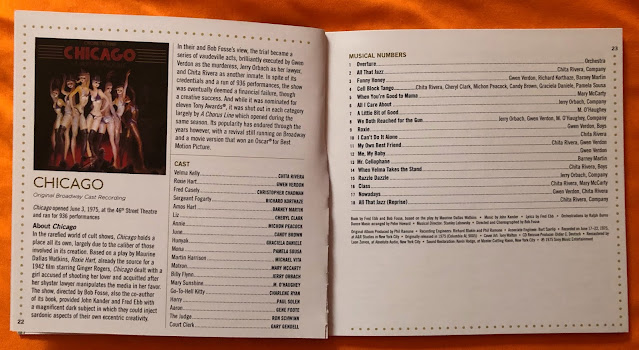 The actresses in the film have an edge and an anger in “Cell Block Tango” that comes across much more vividly on recording than the more subdued performances here. Even if, as I suspect, some of the takes from the movie are slightly anachronistic, they just make for a more satisfying experience as they tell their stories.

Basically the same comments apply for Queen Latifah’s soundtrack version versus Mary McCarty’s interpretation on the Broadway recording. I don’t know how they would have compared if I’d seen the stage version, but on CD I much prefer Latifah’s more colorful take on “When You’re Good to Mama.”

This one is a classic case of excellent singing (Barney Martin on the Broadway recording) versus vivid vocal acting (John C. Reilly on the soundtrack). Each version of “Mr. Cellophane” works for me in its own way, so I’ll call it a draw.

Christine Baranski only sings a few measures in “We Both Reached for the Gun” on the movie soundtrack, so there’s no point in comparing her to M. O’Haughey’s unique vocal performance on this recording. Instead, I’ll say that I find that the bizarreness of this character, as originally conceived, doesn’t do anything for me; in fact, it takes me out of the moment each time the character is present, both on this recording and when I finally saw the superb Broadway revival.

I think the soundtrack version has slightly fuller orchestrations that help make the brassy flourishes in “Cell Block Tango” pop a bit more, but I like the often faster tempos on the Broadway recording, so this is another draw.

The Broadway version is the clear winner here. The movie soundtrack cuts “A Little Bit of Good” (Mary Sunshine’s song), “My Own Best Friend,” “Me, My Baby,” and “When Velma Takes the Stand,” adding only the new closing credits song, “I Move On.” (“Class” was cut from the movie but is included on the soundtrack recording).

Next up is the Original Broadway Cast Recording of A Chorus Line.

Lots to unpack here, Mike! Thanks for this unique way of looking at a Broadway classic.  Jeff