At Christmas a few years ago, Jeff gave me a copy of Broadway in a Box: The Essential Broadway Musicals Collection. He has now given me the opportunity to use his blog to share my impressions of each of the 25 cast recordings contained in the set, in alphabetical order.
This week’s entry is about the 1960 Original Broadway Cast Recording of Camelot. 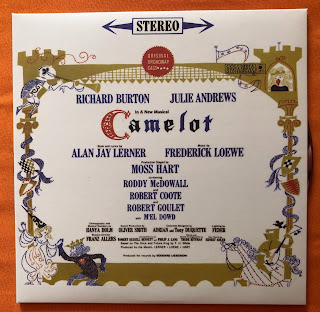 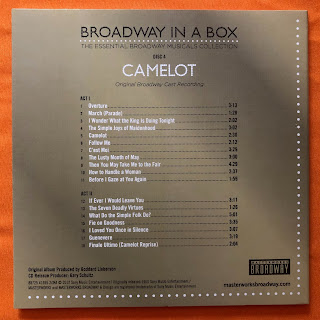 Of all of the shows contained in this collection, Camelot is surely the one I know the least about. I’ve never seen it in any form, on stage or screen, and I only know the “hit songs” from hearing my family members play this very recording as a child. Accordingly, I’ll mainly focus on my impressions of the score itself in this entry.
The show starts off with one of the more beautiful overtures from the Golden Age of Broadway musicals, featuring soaring orchestral renditions of familiar tunes from the show. (It’s easy to see why Franz Allers won a Tony Award for Best Conductor and Musical Director, which surely should still exist as a category.) What follows is a sequence of songs that mostly excel in their vivid characterizations, particularly with regard to the main love triangle of Arthur (played by Richard Burton), his wife Guenevere (Julie Andrews), and interloper Lancelot (Robert Goulet). I will focus on their songs here.
Arthur’s songs paint a picture of an assured but slightly diffident leader who, like most idealists, is never quite content with life. His music tends to be jagged and jaunty, and the role itself is one of those that is written to be only quasi-sung by a skilled actor like Burton. His delightful pre-wedding song “I Wonder What The King is Doing Tonight” shows his emotional vulnerability and sense of humor, while “Camelot” is a joyous expression of his ideals, which admittedly border on the quixotic. “How To Handle A Woman” - the answer is just to “love her” - provides a sharp contrast with his rival, the fiery Lancelot. Finally, his late-second-act duet with Guenevere, “What Do the Simple Folk Do?,” returns full-circle to the theme of wishing for something simpler in a world that is beyond the king’s control.
Guenevere’s music tends towards the lush and romantic; her character, like several others performed by the young Julie Andrews, is portrayed as innocent but not naive, and not interested in being innocent forever. “The Simple Joys of Maidenhood” is her counterpart to Arthur’s pre-wedding ruminations, which shows her complaining to her patron saint about her impending loss of any chance at a normal youth. Judging by her earthy next song, “The Lusty Month of May,” one suspects it’s not exactly maidenhood that she regrets missing out on. We are thus not surprised that it is Lancelot to whom she sings her gentle first-act closing number “Before I Gaze At You Again,” exhorting him to leave her so she can remain faithful to her husband; as well as her final song, “I Loved You Once In Silence,” where we learn that she has failed to do so. 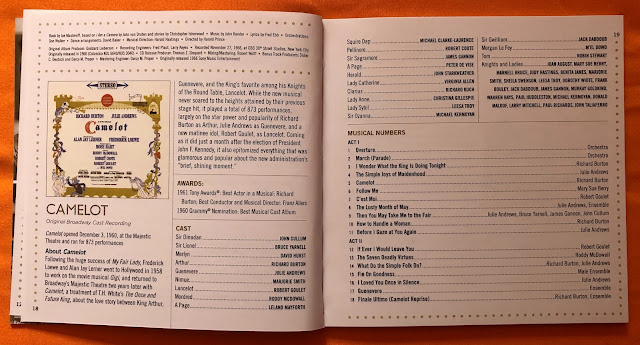 Lancelot’s music tends to be brash, brassy, and expansive in melody, in accord with his ultra-confident and passionate personality. The first of his two big songs is the fanfare-like “C’est Moi,” in which he announces his arrival to save the day without any hint of humility; you know immediately that this is a man who will get what he wants. In his second song, “If Ever I Would Leave You,” he waxes (sort-of) poetic about his love for Guenevere. This became Robert Goulet’s signature song for the remainder of his career, and it’s not hard to hear why from this recording. I don’t know a lot about Goulet, but my impression is that he masterfully straddled the line between operatic tenor and lounge singer, and this song is a perfect fit: I think we are supposed to be a little bit cynical about the earnestness of Lancelot's over-the-top singing and sentiments.
I do have two minor quibbles about the score as recorded on this CD. First, the three songs that lead up to the poignant finale seem to peter out a bit; “Guenevere,” in particular, features a very repetitive melody and lyrics that blatantly violate the “show, don’t tell” mantra. Second, a large number of the songs are in the verse-chorus form common to many Golden Age musicals, which can be slightly monotonous; more often than not, you know you’re going to have to wade through 30-60 seconds of introductory material before you get to the “real” song. These are small issues, to be sure, and I will add that most of the songs are wonderfully concise, with many clocking in at under three minutes and only two exceeding the four minute mark.
My impression is that the consensus among Broadway fans is that Camelot fails to be a My Fair Lady-level classic because of a weak, perhaps overcrowded book. If so, I hope that’s something that can be fixed for any upcoming revival. The score is certainly well worth resurrecting, and the autumnal but hopeful story of the rise and fall of a liberal order would seem to fit well with our current moment in history. I, for one, hope to see these songs performed on stage in the next few years.
Next up is the 1965 Lincoln Center recording of Carousel.
Thanks, Mike. I, too, would love to see a revival of the show! Jeff
#2604
Posted by JK at 7:00 AM