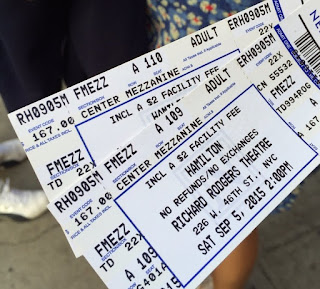 Last week, I shared my first "Broadway Thing," a specific thing about Broadway that I get a big kick out of.  Love those artful photographs!  This week, I'll share #MyBroadwayThing with a sense of impending doom.

I'm talking about physical theater tickets. In this increasingly digital world, I suppose it is foolhardy to think these things will be around much longer, and so I'm feeling both nostalgic and sad about these little strips of card stock.

It's something that I know won't be around much longer, but I cling to it for three big reasons:

1. I still get that sense of butterflies in my stomach when that plain white envelope arrives in my mailbox every time.  It takes me back to the days when you'd either call (or send a letter to) Telecharge requesting tickets to Cats, and the operator would go through the schpiel  about "all sales are final, blah blah blah...and your tickets will arrive in a plain, unmarked envelope approximately 2 weeks before your performance..." Then the waiting game...and then... eureka! The envelope would be there with the golden tickets inside. It's as good now as it was then (though a lot cheaper then - the fees are ridiculous these days!) 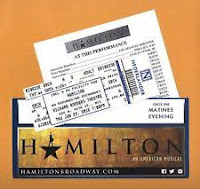 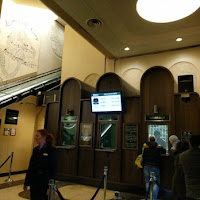 2. I love NOT paying extra to have tickets mailed home, and picking them up at Will Call.  Is there anything more exciting (pre-show) then giving your name to the guy behind the glass who looks mildly bored was he scoots the tickets (sticking out of the little envelope) through that little hole at the bottom of the glass. "Enjoy the show," he says, polite, but still weary sounding. Then there's the brief moment of panic, when you check the tickets before you leave window, and breathe a sigh of relief when you see your name and the right seat numbers on the tickets! (Side note here: Definitely check your tickets before you leave the window - one time I got somebody else's tickets in the envelope with mine. I was honest and returned them. But these days? Imagine someone less honest suddenly having 2 extra tickets to Hamilton that they could easily unload at quite a profit!) 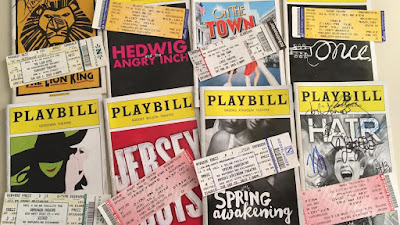 3. I'm really not that old, but I've reached the age where I find myself saying things my grandparents and parents would say. (They'd say, "I remember eating a 3 course meal at the Automat for less than a dollar!" I'd say, "Instant gratification isn't always best.", We'd both say, "Isn't it a shame that people don't dress for the theater any more?") And I guess it is that sense of nostalgia that makes me cling to paper tickets.  They are a souvenir all by themselves! (I still have a set of brass ticket key chains somewhere, too.) Yes, I keep them - I have a book of tickets kept in a scrapbook type thing made just for tickets (clearly, I'm not alone in this...right?). And now I keep my tickets with my Playbills in binders (that's a future blog). I still have my very first Broadway ticket from Mame - August 20, 1983. 2PM. Orchestra Row S, Seat 112.

Yes, that sense of nostalgia for a sure-to-be-dying-soon thing is a big part of it.  I mean, I'm the guy who still wants a physical CD for a cast recording, not a digital download,  I want something I can hold.  You know what I mean?  It was hard enough letting go of Original Cast Recordings on vinyl.