While I was away from theater blogging over the past couple of years, life took me in a slightly different direction.  Still, my love for live theater never left me - and 2017 was no exception.  Granted, the last 365 days only afforded me the privilege of seeing 9 Broadway and off-Broadway productions and 1 National Tour.* But, boy, did I get a lot of bang for my buck!  Here are my best theater experiences for 2017:


This year afforded me the rare opportunity to have a true Diva Weekend of shows: in 2 days, I got to see Glenn Close, Patti LuPone, Christine Ebersole and Bette Midler! Will the stars ever align like this again?  I doubt it. And even though their respective shows varied in quality, there was never a moment where these ladies weren't true Broadway royalty. What an honor!

My Broadway year also included spectacular turns by several other of my favorite ladies: Amelie's Phillipa Soo, Pacific Overtures' Ann Harada, Sunday in the Park with George's Annaleigh Ashford (the first Dot to make me cry!), Hello, Dolly's Kate Baldwin, The Great Comet's Denee Benton (even better than the first time I saw her in 2016), and the always awesome Karen Ziemba and Emily Skinner of The Prince of Broadway.

This isn't to say that men weren't well represented in 2017. Not by a long shot. Amelie's Adam Chanler-Berat continues to be one of my favorite young performers, and there was the double-dose of excellence that was Sunset Boulevard and The Prince of Broadway's Michael Xavier, Sunday in the Park with George's Jake Gyllenhaal (the best George by far), Hello, Dolly's Gavin Creel and Taylor Trensch (who I hope to see in Dear Evan Hansen), and The Great Comet's Lucas Steele (even better than the first time I saw him in 2016).


Adam Chanler-Berat, Phillipa Soo and the Company performing "When the Booth Goes Bright" from Amelie
For me, the whole show was the most underrated, under-appreciated show of the year. I don't know about you, but I needed a romantic fantasy. Isn't there something to be said for a show this year that starts with a song called "Times Are Hard for Dreamers" and ends with "Where Do We Go From Here?" And this song moved me like no other in a new musical in 2017. Daniel Messe and Nathan Tysen are two writers I hope we here from again soon


Bryonha Marie Parham singing "Cabaret"
This Act One closer of The Prince of Broadway was a mouth-agape-can't-find-the-words stunner.  She was simply amazing. I'll just leave it at that.

Honorable Mention: Michael Xavier singing "Sunset Boulevard"
A powerful performance that made this song a standout that it never was before.  Of course, it all started with entrance applause for a wet, bathing suit clad Xavier, and included a gasp-inducing costume "change." Nah. That helped. But the performance was amazing. The Tony nominators made a mistake leaving him off the list.


I enjoyed her in the original production, though I remember cringing a few times at her over-the-top take an an already over-the-top character. And though she still has not eclipsed my favorite Norma Desmond, Betty Buckley, the 2017 version she brought to the stage was powerful and heart-breaking. Close was absolutely right - the intervening years made for a deeper portrayal.


I have to admit that I never once forgot that I was watching Bette Midler instead of Dolly Levi, and normally that would be a deal breaker for me. But Bette being Bette is in a league of its own - and it is a fair argument to say that the role is ideally suited to the actress. The energy in the room combined with the 200% she gave every single second was an experience I'll never forget. To channel another Broadway legend, being in the room where a legend happens is rare indeed.

Best Replacement: Ingrid Michaelson as Sonya in Natasha, Pierre and the Great Comet of 1812


While it may seem like stunt casting (and maybe it was), it was worth bringing this fantastic performer on board. Her chemistry with Benton was palpable, and her "Sonya Alone" was dynamite. Maybe you could say she was just doing the job she was hired to do, but you could never accuse Michaelson of phoning it in. Case in point: when she was "just" part of the ensemble - and relegated to the farthest point from the stage in the rear mezz, she danced and sang with her whole body and soul. I was in the front row of the front mezz, and she was what I was watching. I'm sure we can all think of a "star replacement" who didn't give 100%.


And the above lists don't even include the stunning tour de force of the entire company of A Doll's House, Part II! If there was ever a case for a full cast Tony Award, this was it. Tony winner Laurie Metcalf earned every accolade she got, as did the always wonderful Jane Houdyshell, and the understated elegance of Condola Rashad. (Chris Cooper more than held his own, too...)

Best Technical Element: The Chromolume in Sunday in the Park with George


The view from the cheap seats at the newly opened Hudson Theatre is among the best on Broadway as it is, but I sure was glad to have been sitting up there for this show.  I felt sorry for everyone below me.  They missed out on an amazing spectacle!

Best Theater-going Experience of the Year: The First National Tour of Fun Home: 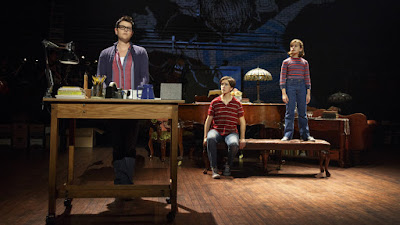 Over the years, I had the opportunity to see the birth of this landmark production at The Public, and its evolution into a profoundly moving, exhilarating (and profitable!) Tony-winning Broadway musical. In the process, I got to see each Medium Alison, Small Alison and Helen (Michael Cerveris and Beth Malone were in every performance I saw), and even attended the emotional, triumphant final performance at Circle-in-the-Square.  So, if I'm being totally honest, I went into the National Tour with a bit of trepidation - could I go back to enjoying a proscenium staging? Could I appreciate a different Alison and Bruce? Turns out, I worried for nothing.  It was spectacular. Sam Gold took the best of his Broadway staging and blended it seamlessly with his Public staging. Kate Shindle proved to be a terrific Alison, and Robert Petkoff offered a touching take on Bruce.  And there was a lovely, heartbreaking Helen in Susan Moniz's mesmerizing performance.  And remember this name: Abby Corrigan. This Medium Alison is going to be a big star.