THE FRIDAY 5: Things I Miss in the Theater District

THANKS FOR YOUR PATIENCE - HAVING TROUBLE WITH THE PLATFORM TODAY...

I'm getting to that age where more and more I'm getting nostalgic - especially about things I love.  Since I LOVE all things Broadway, it stands to reason that there are things I'm nostalgic for in the Theater District. I've been going there regularly since 1983, and I can tell you that, by and large, the massive amount of changes that have occurred there have been for the good.  It's much cleaner, safer and easier to get around.  In fact, there will soon be a Friday 5 of Things I'm Glad to See in the Theater District.  But for now, here's what I'm missing:


Jeff's 5 Things He Misses in
The Theater District

5. The Celebrity Deli at The Milford Plaza

Okay, I miss The Milford Plaza period. The old "Lullaby of Broadway" ads, the cramped rooms, the decent rates.  But on the corner of 45th and 8th Avenue was a great place to eat.  The sandwiches were huge, the breakfast was great (and they had awesome fries and gravy).  And there was something about the cramped tables and the disinterest of the wait staff.  Pure magic!

4. The Broadway New York shop at the Marriott Marquis

I know there are still the 2 Broadway gift shops (and I visit them both every time I go to NYC), but I like the one in the Marriott Marquis.  Sure, they had the same stuff the other places did.  But I loved the set up, the super nice guys behind the counter (one of them is still working at the one by the St. James Theatre) and the bargains in the back corner and the old show programs back there, too.  And I loved looking at their windows. 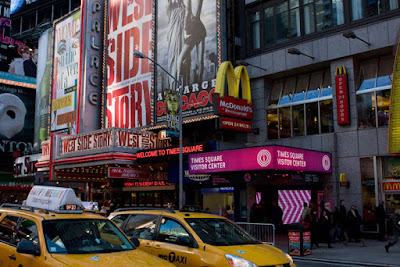 There was something really cool about stepping into this place.  The immediate quiet when the door shut you off from the cacophony of Times Square...the beautiful marble walls and crystal light fixtures... the tiny, but really nice bathrooms... it was like stepping back in time.  And the museum displays - I loved the Andrew Lloyd Webber memorabilia collection, and the displayed Gypsy Robes.  The history was palpable! 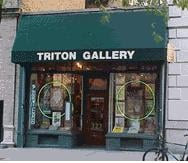 I have only purchased posters from them twice since they moved from the quaint old store front across from the Martin Beck Theatre. The warped floors, the musty smells, the subway one sheet of Mame - my first show - that no one ever seemed to buy.  The guys who worked there that would talk about each show you got a poster for... they way they packed up your purchases if you told them you were travelling. It lost all of its charm when they moved.

We tried the new place that is there now.  It isn't bad, but it's kinda expensive for what you get, and even though you can still see many of the historic architectural details, it has the cold charm of a new Starbucks.  I really miss the big portions, the inexpensive final bill, the fast service, and especially the signs in handwritten magic marker. I'm too sad to write any more... sigh.
Posted by JK at 7:00 AM