REVIEW: Come From Away 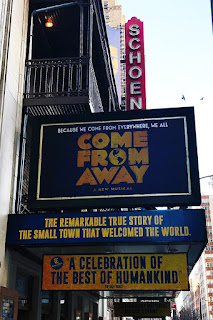 Review of the Saturday, February 24, 2018 evening performance at the Gerald Schoenfeld Theatre in New York City.  Book, music and lyrics by Irene Sankoff and David Hein. Scenic design by Beowulf Boritt. Lighting design by Howell Binkley. Costume design by Toni-Leslie James. Musical staging by Kelly Devine. Direction by Christopher Ashley. 1 hour, 40 minutes. Come From Away is performed without an intermission.

I'd heard great things about Come From Away from friends, and I'd listened to the cast recording a few times, but nothing truly prepared me for just how wonderful this show really is.

Our day started with a matinee of The Band's Visit, an equally wonderful production with similar themes, characters and plot. Strangers arrive unexpectedly in a small town in the middle of nowhere and the lives of all involved are forever transformed.  Both shows also share vibrant scores, on point staging, and the ability to make time stand still and fly by.  I was not alone in being moved by both shows for the same reason: both highlight the instinctive ability for people to accept, love and help each other when the going gets tough. Would that there was more emphasis on these themes in real life - we'd all be the better for it.

Truthfully, the fact-filled book and lyrics by Irene Sankoff and David Hein breaks one of my cardinal rules for theater: it tells rather than shows. There are thousands of facts and people to cover, so it makes sense to a point. Normally, that wouldn't work anyway.  But in this case it does, and here's why.

First, in between the facts, there is equally revealing dialogue. It's one thing for the town cop, the school teacher and the counter girl at Tim Horton's to tell us what their daily routines are, but completely another to show us how those routines are immediately disrupted. And these facts help shape a timeline that we, some 16 1/2 years later, remember like it was yesterday. Surprisingly, knowing that timeline helped create real dramatic tension as we found out how other people lived through it.  There is a scene where all of the planes were finally flying after days on the ground. Watching these people's joy and sorrow as life was returning to a new normal made me think of where I was the first time I heard the planes again. I am certain I was not alone having these kinds of memories as the show went on.

Second, there is a truly amazing level of acting going on here, with the entire cast playing several distinct characters, sometimes more than one each in a single scene or number.  This company is the true definition of "ensemble," and another reason why the Tonys need a Best Ensemble award.  It almost feels wrong to single any of them out, as they were uniformly fantastic at showing us distinct characters with changes to voice, accent, a different jacket or hat (costumes designed by Toni-Leslie James), but also with little changes to their eyes and in their physical reactions.  Still, I was moved by the dread and strength of Hannah, whose son was a fireman at the Towers, and played with such dignity by Q. Smith.  And I found great humor and appreciation for Bob, a jaded New Yorker who expected the worst from people but only got the best, and came away a changed man, played to perfection by De'lon Grant.  The quirky restraint and fiery passion of Gander's mayor was played with crotchety delight by Joel Hatch, while the pragmatic but warm and selfless teacher Beulah was brought to life by the thoroughly amazing Astrid Van Wieren.

The two central couples gave us people to root for - and it is to the show's credit that the way they end up was both inevitable and surprising.  Chad Kimball and Caesar Samayoa played the "gay Kevins," with nary a stereotype in sight (save for a self-deprecating joke or two) which was a breath of fresh air all by itself.  And there was Nick and Diane, complete strangers thrown together and falling in love when they both realized they each filled a need neither knew they had; John Jellison (a great understudy) and Sharon Wheatley had adorable chemistry from start to finish.

It was Jenn Colella's acclaimed performance that I was most looking forward to, and she did not disappoint.  What an actress - more than an actress - a force of nature!  Watching her go back and forth between her school teacher Annette and pilot Beverley Bass characters was remarkable in its attention to detail; both women were strong in completely different ways, and Ms. Colella brought every nuance to vivid life. She and the female company provided a highlight to the evening with the revelatory and passionate anthem "Me and the Sky."

Finally, while the words may have done a lot of "telling," the masterful staging created a lot of opportunities for "showing."  Kelly Devine's musical staging was like watching the intricate jewels click into place in an ever moving kaleidoscope.  It boggles my mind how the company memorized all of the minute changes of position, lighting (by Howell Binkley)and furniture (scenic design by Beowulf Borritt) to create before our very eyes - and within seconds! - everything from a pair of school buses, to a jumbo jet, to a school room taken over as a shelter. And that doesn't even include the actual dancing. (I could watch "Screech In" - with that fish - over and over!)  Now having seen the show, I can completely understand Christopher Ashley's Tony win for direction. He keeps a tight rein on the proceedings, knowing smartly when to let the energy and the emotional content ebb and flow. We go from sorrow and confusion ("I Am Here"/"Prayer" - a beautiful number) to fear, confusion and anger ("On the Edge") to thrilling abandon and a joyful release (the aforementioned "Screech In").

I love when a musical engages you in unexpected ways. Come From Away surprised me on a personal level. It never occurred to me how cathartic it would be to laugh at that horrific day in history. To revisit that life-changing time and smile, clap, and shed a few tears in such a communal way was an experience I'll never forget.  Oh! And when you go, be sure to stay for the post-curtain call where the band takes center stage and gives a mini-concert.  They are fantastic!

The people of Gander are heroes as much as any first-responders, giving selflessly in what must have felt like an impossible situation. I wouldn't mind going to The Rock and kissing a fish. To come from away to meet these people would be a real honor.