REVIEW: Once On This Island 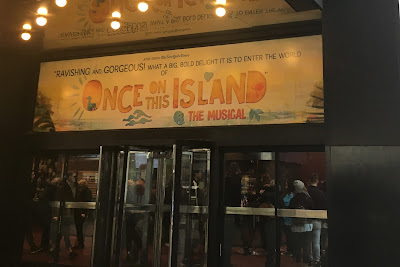 Review of the Sunday, February 25, 2018 matinee performance at the Circle in the Square Theatre in New York City.  Starring Tamyra Gray, Norm Lewis, Alex Newell, Lea Salonga, Hailey Kilgore, Phillip Boykin, Kenita R. Miller and Isaac Powell. Book and lyrics by Lynn Ahrens. Music by Stephen Flaherty. Based on the novel My Love, My Love by Rosa Guy. Music supervision by Chris Fenwick. Choreography by Camille A. Brown. Direction by Michael Arden. 90 minutes; Once On This Island is performed without intermission.

It was cold, gray and rainy on the afternoon we went to see the revival of Once On This Island. It was our fourth show in three days, and it had been a doozy of a weekend. The three shows we had seen up to this point were all a theater-lover's dream, and, frankly, I worried that maybe we were too tired to fully enjoy this last show, or that somehow, after such great luck with those other shows, this last one would disappoint. Well, I was no more than three steps into this unique space, and all my worries were gone in an instant.

The sights and sounds of an island took up all of my senses at once. It is clear that the expanse of beach laid out on the stage has been ravaged by a bad storm. Debris covers the sand, a fallen telephone pole has laid claim to several rows of now-crushed theater seats, and the already poverty stricken populace is revealed by walls covered with reclaimed corrugated tin and re-purposed signs. An 18-wheeler has backed up onto the beach as a recovery mission has clearly begun. The bright lights beating down through a haze and the clear blue of the inviting pool of water that disappears into the horizon are the only signs of what may normally be called a tropical paradise. The space recalls the recent horrifying pictures of Puerto Rico and other islands ravaged by Hurricane Maria, not to mention the ongoing crisis in Haiti; the level of detail in Dane Lafferty's scenic design, punctuated by Jules Fisher and Peggy Eisenhauer's gorgeous lighting and Peter Hylenski's spot-on sound design, is both disturbingly current and other-worldly. I was transported and invigorated.

This island - "a jewel of the Antilles" - slowly comes to life as its citizens arrive to begin clean up.  Relief workers are there too, offering medical assistance and a helping hand. We are part of the action as well when the inhabitants see us, greet us and offer a smile and a corny joke or two. Watching them work with such positivism is the first of many reminders throughout the next hour and a half of the inherent goodness of people. Next thing you know, the show starts and the outside world completely melts away.

Much like both Come From Away and The Band's Visit, Once On This Island is truly an ensemble effort. Sure there are larger roles for some, but the entire company functions as one, with the Storytellers just as indispensable as central characters. Everyone moves scenery, sings back up, and plays "found" instruments (craftily designed by John Bertles and Bash the Trash); I can't imagine the show without any one of the company members. Sure, part of this is a function of Lynn Ahern's fairy tale-like book, but this extremity of blissful cohesion is largely due to the visionary direction of Michael Arden. After his beautiful staging of Spring Awakening, Arden proves here that he's no fluke. He is a new, important voice in musical theater with a long career ahead of him, and we are all the better for it.  The thrilling choreography by Camille A. Brown adds to the vibrancy with dances and staging the evokes both traditional island rhythms and a contemporary sensibility. That the cast does most of this on piles of sand makes it all the more exciting.

And what a cast this is!  Where to begin? How about the Broadway debut of Isaac Powell, who sings and moves like an athletic angel? This young man is a true triple threat with matinee idol looks and a smile as bright as a Times Square billboard. Half of the ill-fated central couple, he convinces as both the vulnerable, kind-hearted soul that right-side-of-the-tracks Daniel truly is and the cruel reality of a boy trapped by his station in life.  Making a difficult decision as he did was painful for him - his eyes tell this part of the story wordlessly - and felt like a stab in the heart for this audience member. Mr. Powell has the added advantage of working primarily with another Broadway debutante, Hailey Kilgore, who is nightly delivering a star-making performance, with the finesse of a multi-show veteran.  Her Ti Moune is wide-eyed and innocent; the charming way about her draws you in, and you are exalted by the depth of her love and beliefs; the same charm is equally (if not more so) devastating as this couple is torn apart and she meets her tragic end. Her beautiful voice threatens to blow the doors right off the place. Mark my words, these two young people are the Broadway stars of the very near future.

The other central couple of the piece sneaks up on you with their quiet grace and heartbreaking honesty.  As Ti Moune's adoptive parents, Broadway veterans Phillip Boykin (Porgy and Bess) and Kenita R. Miller (Xanadu) threaten to steal the show.  Their simultaneous subtlety and heart-on-their-sleeves emotions are a potent mix, and they make you feel every single emotion in their powerfully wrought performances. Their "A Part of Us" is a emotional, heartbreaking highlight.

Overseeing both the story and the space itself are the quartet of gods, rulers of earth, water, love and death, a double yin and yang, if you will.  And these four are simply astonishing.  As Asaka, goddess of the earth, Alex Newell, possessor of a glorious set of pipes and an astonishing presence, does as much with a wink and a smile as he does with the twirl of his tablecloth skirt (ingenious "recycled trash" costumes by Clint Ramos). At times larger than life (his "Mama Will Provide" is a showstopper of legendary proportions), Newell also, and more impressively, knows when nuance and grace are the smarter acting choice. The conscious gender-bending of this role fits the actor and show like a glove.  Similarly, the role of death demon Papa Ge has been assigned to a female, played with a scary urgency by the fierce whirlwind that is Tamyra Gray.  I think she was born to play this role, her modulation of tone and emotion is so expertly applied.  The confidence she exudes is matched with her command of the stage. Whenever she stalks the stage, your eyes go to her - most fitting for the specter of Death.  Her voice is never in question - she's an American Idol finalist, after all - but her acting is just as strong.


Then there is the fatherly presence of veteran Norm Lewis as water god, Agwe. A captivating mix of warmth and playful power, Lewis sings the hell out of "Rain."  The role suits him perfectly, and one wishes he had even more to do. That said, he makes the most of every moment he has. Finally, there is the quiet elegance of the thoroughly captivating Lea Salonga. That is not to say she's any less fierce or compelling than her three cohorts.  No, pro that she is, she picks her moments carefully, and doesn't disappoint her fans.  When she sings "The Human Heart," there is no mistaking that you are in the presence of  a true Broadway legend.

The stunning whole of this production is a really emotional ride, one that I hope to take again, it is that good.  Once on this Island is definitely not enough. It's one of those total theater-going experiences that leaves you better for having seen it.