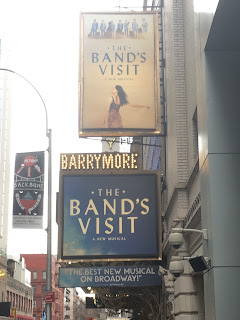 As I tried to wrap my mind around the sheer brilliance I had just witnessed in The Band's Visit, a lyric from the Kander and Ebb musical Zorba came to mind: "Life is what you do while you're waiting to die. This is how the time goes by!"

That pretty much sums up the action (and lack of it) in this remarkable study of culture clash and culture bonding in the middle of nowhere. In what could have been an explosive, violent meeting, ordinary people are tested when strangers come to town, and choose communication, charity and caring over mistrust, anger and hate.  It is as much about what is not said in long periods of silence as what is said in Itamar Moses' fat-free book.  And then there is the music - the gorgeous, evocative music and poetic lyrics by David Yazbek.

I've long been a fan of this four-time Tony nominee's work, but this score is on a whole new level. Each song takes you to a new emotional place, some funny, some wistful, still others full of hope, but all infused with of-the-moment urgency that simultaneously keeps you grounded and able to surrender to a place that will be foreign to most observers.  Highlights of this thoroughly brilliant score include the witty "Welcome to Nowhere," the epic grandeur of "Omar Sharif," the awkwardness of youth in "Papi Hears the Ocean," the longing of "Something Different," and the haunting, profoundly moving coming together of everyone in "Answer Me."

This Visit is helped greatly by a uniformly superb ensemble cast, led by the sublime Katrina Lenk, who is in the role that will make her a full-fledged star if there is any justice in this world.  Hers is a star turn that will likely be talked about years from now - think Donna Murphy in Passion, Patti LuPone in Evita.  Lenk moves about the space with the lithe aloofness of a cat; you can't take take your eyes off of her.  Then there's the quiet grace of Tony Shalhoub, whose measured widower almost lets his guard down, and still comes away from the experience with unexpected personal growth. The chemistry between the two is palpable.

The supporting players are just as terrific.  It was nice to see John Cariani bring his trademark quirkiness to a new level of intelligent thoughtfulness as the "between jobs" Itzik, and Kristen Sieh provided the perfect counterpoint to his antics as his tired, fed up wife Iris.  Andrew Polk, as the warm, widowed patriarch Avrum, adds to each scene this family is part of.  Then there is the sly, sensual Ari'el Stachel, who, as Haled, oozes charm, and wields it like sexy ninja - striking when the time is right for his own needs, but also using his more genuine romantic nature to help an awkward young man named Papi (wonderful understudy Ahmad Maksoud) take his first steps toward a relationship.  Finally, there is the island of a man, known only as Telephone Guy and played with enigmatic flare by Adam Kantor, who spends his days staring at a phone waiting for it to ring. It is this lonely creature that brings all of the town folk together musically as they finally, as one, show us what they (and all of us) crave - to be heard and responded to.

I would be remiss not to mention the titular "band," both on stage and off, who not only play the score, but punctuate each scene with intricate and virtuoso Middle Eastern musical riffs: Ossama Farouk, Sam Sadigursky, Harvey Valdes, Garro Yellin (onstage) and Andrea Grody, Jeff Theiss, Alexandra Eckhardt and Philip Mayer (offstage). Bravo, all.

This quiet gem creeps up on you.  It feels like nothing is happening and like everything life has to offer is happening all at once.  Many times, it is the wordless scenes where everyone is searching for ways to connect.  Sometimes it is the small details - the purpose-filled cutting of a watermelon for sharing, the way a father picks up his crying baby in the absence of its mother, the way a lost band lines up to leave a newly familiar, but welcoming, town.  Sometimes it is the grand gestures - sharing a family dinner with a stranger and forcing him to play his own music, a stranger showing a young man how to overcome painful shyness to put the moves on a pretty girl, a dinner out punctuated by a tense confrontation. Would that there was more of this kind of story happening in the real world. Hate is the easy way out; communication and understanding should be just as easy. Big or small, there isn't a bad or wasted moment in the entire 90 minutes.  Brilliant.