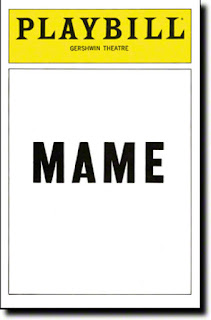 The image to your left is the one that started it all for me.  My very first Broadway show began what has become an obsessive collection. Before that fateful August afternoon in 1983, I had gotten Playbills for shows that were national tours that came to town, but I always got the program, and so I only read the Playbill, which, inevitably led to my mother throw it out after it got left laying around the living room or something or other. But that little magazine somehow took on super powers when I got it at the Gershwin Theatre - of course, that was also the day that was one of a very small handful of "life-changing moments" of mine.  That probably has a lot to do with another of "my Broadway things": storing my Playbill collection.

Like many collectors, I am sure hope, my methods of collecting have evolved over the past almost 35 years.  I kept my collection first in a shoe box, then, in what at the time was the only kind of Playbill binder, but today is the "basic" version (the kind with the metal sticks that hold them in the vinyl covered binder). I still have 18 of that type. Then I started putting them in bags with special cardboard designed for comic book collectors, and held in 3 foot long boxes also designed for the antics of Spider-Man and Archie. (I have two of those filled.) That is by far the most economical method for collecting, but is also the most difficult to look through.  That method was also borne out of economical necessity.

Fortunately, I'm now able to "upgrade" and I use the "ultimate" version of the Playbill binder, which is definitely the most expensive, but also the nicest and easiest to look through. Today's magazines are much thinner than the were back in '83, and I could probably put two in each sleeve, but if I'm completely honest, I don't because I don't want the flap showing over the cover!  Instead, I put my ticket (yes, an actual ticket!) and any understudy inserts in the back. Win-win! My trip this past weekend will be the beginning of my TENTH binder of this type. (Not a brag, more a troubled confession...)

Along with this comes the obsessive way I collect them.  This includes carrying a small plastic bag in my pocket in which to carry my treasures home, guarding them from the elements and too much actual handling. It includes asking the usher, "May I have an extra copy, please?" They rarely say, "no." Then I select the one with the closest-to-perfect cover, and put it inside the "extra copy" and stow it safely under my seat. And. no, I don't look at it before the curtain or at intermission, either.  The final step is getting it carefully back to the hotel (or even more dangerously, ALL THE WAY HOME) for final storage. I've got the barely-touching-the-good-copy-while-putting-it-in-the-sleeve method down to a science. Once the book, ticket and understudy slip are in, the flap is put in place and I am done! The extra copy is now mine to enjoy for reading!