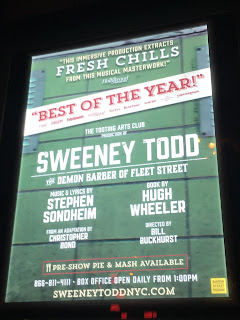 My friend and frequent theatre companion Mike made an excellent observation after we saw Sweeney Todd: The Demon Barber of Fleet Street at the Barrow Street Theatre. He said, "It is amazing that one show can work brilliantly on a traditional Broadway stage, as a grand opera production and a tiny room with eight actors."  "Brilliant" pretty much sums up this thrilling, funny and downright scary production by The Tooting Arts Club.

One of my all-time favorite musicals presented in the currently en vogue immersive style could have been a recipe for disaster. I was concerned that "immersive" could turn ugly - visions of pretentious, too "in your face" blood for the sake of blood danced in my head. Then there was the eight person cast - eight people! - singing this huge score to a three-piece band - three piece! No. Way.

Thankfully, gloriously, I was worried for nothing. After seeing this masterwork everywhere from Broadway to a concert staging to a dinner theater to a high school, this teeniest of Todds may just be my favorite of all time. And here's why...

I sat in the "immersive experience" section (which I highly recommend - totally worth the extra cost), which means I got to know a few fellow theater lovers sharing a common experience, and got to be literally inches from some of my favorite actors - Hugh Panaro was at the most three inches from me a couple of times.  More than once, our table was an entrance/exit point, and part of the action. "Epiphany" by a Sweeney whose razor is fully extended and pointing at you while singing about "less honorable throats..." and raging "we all deserve to die!" as he stares you in the eye gives it a more, um, "urgent" feel. "God, That's Good!" takes a more macabre turn when the unsuspecting patrons of Mrs. Lovett's shop are devouring her meat pies right in front of you.

For all of that "in your face"ness, though, it has all been carefully staged to maximize effect, not to excess or overindulgence.  Director Bill Blackhurst has crafted this staging to embrace the melodrama and comedy of the piece, particularly in act one, while act two takes a decidedly dark turn, where the murder and consequences of greed, revenge and madness build to a terrifying end.  Blackhurst also makes the very most of the very small space - the necessity of maximizing the small touches frequently astonish - a small room is very creepy and shadow-filled when lit by a sole candle and  a sailing ships arrival heralded by lighting a stained glass window with said ship on it is an "aha moment," even if it is a blink-and-you'll-miss-it thing as well. One wouldn't imagine choreography at all in a room this small, especially Sweeney Todd. And yet, Georgina Lamb adds to the evening with brisk staging and fun hand movements using forks and knives.  The space, designed with alarming detail by Simon Kenny and eerily lit by Amy Mae, becomes an added character.

As tightly directed, staged and streamlined (there are generous and completely appropriate cuts to book and score in act two) as this production is, it wouldn't be nearly as effective without a cast fully in tune with the demands of this production.  This cast is flawless. (NOTE: The principals all gave their final performances on Sunday; a new principal cast  begins today.)

Across the board, this ensemble has mastered the ability to be both broad and painstakingly detailed, playing every heightened-reality moment without ever overdoing it, all while taking advantage of the close-up nature of this production.  This level of detail and subtlety is not often afforded stage actors, and they embrace it. Stacie Bono does triple duty as a citizen, the Beggar Woman and Pirelli, playing each with an infectious/sinister glee (Pirelli) and a pitiable sadness - even in her comedic moments (Beggar Woman).  The wonderfully sung and dastardly Beadle comes courtesy of John Rapson, and sinister and manipulative Judge Turpin is made all the more so thanks to Michael James Leslie, whose overbearing presence, and deep, creaky voice makes the character's demise very satisfying. (NOTE: These performers will remain with the production.)

The sweet innocence and eventual dissent into madness of Tobias is effortlessly played for every delightful "moment" by John-Michael Lyles, who I am sure is going to be a name we will all know soon.  His "Not While I'm Around" haunts me still all these days later. Then there is the magnificent turn of Eryn Lecroy, who nails not only the skittish ingenue of Johanna, but also infuses her with a modern
edge of self-awareness, mining rarely touched humor in this role. And she sings beautifully, even making the sometimes intolerable "Green Finch and Linnet Bird" not only tolerable, but an actual highlight of the show.  Jake Boyd's Anthony is an intoxicating mix of wide-eyed naivete, love-struck bravery, and just a dash of sexiness which is a perfect match for Ms. Lecroy's self-awareness, and like her, his vocals are lovely.

Hugh Panaro finds all of the usual notes of self-destructive mania in Sweeney Todd, to be sure, but he also finds the humanity, humor and regret that is sometimes missing in other interpretations. His is a performance that is wonderfully sung and takes full advantage of this immersive staging, both in the broad (and literal) strokes, but also in the quieter, more reflective moments.  His "Epiphany" is stunning, his "Johanna" in act two is an exercise in cunning, and he joins in on "A Little Priest" with a menacing sense of humor.

But this production belongs to Carolee Carmello's Mrs. Lovett.  I didn't think I'd ever write this in my life, but she surpasses the great Angela Lansbury as my favorite Nellie.  While it is obvious she's in control of every single eye-roll, smirk and loving coo, Ms. Carmello never comes across as affected or rote. In act one, she's as hot a mess as her crazy hair, getting all of the usual laughs, but also finding humor where it wasn't before.  In short, she draws us in with her cute smiles and flattery. We are unprepared for her dark side, and are easy prey for her in act two.  Absolutely chilling in the second half, as you watch her work, it slowly dawns on you that you could be a pie filling as easily as a pie eater in her world. It is her performance in "Not While I'm Around," though that sealed the deal for me. Her easy, welcoming smile while lying to Tobias' face flips in an instant when she holds him close and plots and plans over his shoulder. Hair-raising and amazing. Brava.

I can't recommend this show highly enough.  It's a trip to the pie shop you'll never forget.