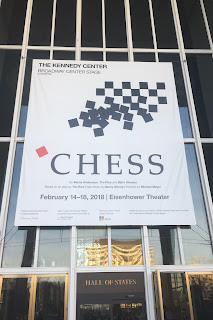 Chess the musical, like chess the game, seems to have an infinite set of moves to play. While it's no surprise that the score (by Benny Andersson, Bjorn Ulvaeus and Tim Rice) remains the star of the show, the stunner is that this latest gambit was charged with crafting a decent book to match, this time by Danny Strong. Looks like there is a solid show there, one with considerable (and timely) bite. It's still not there, but it's the closest I've seen yet.

Don't get me wrong.  The show remains problematic on all fronts, including the score.  Songs have been added, cut, revised and/or rearranged.  I won't quibble with the numerous lyric changes over the most recent versions, with one exception.  "Someone Else's Story," if the team insists that it stay with Svetlana, then it must feature lyric changes - as it stands what she sings makes no sense, no matter how wonderfully delivered.  And if they must continue to rearrange the order of the songs, they really need to be mindful of where we are in the story. Case in point, "Heaven Help My Heart," a number for Florence, happens way too early in the story, and as currently played, she's not ready at that early point to declare life-changing love. She's too strong to drop everything and fall head over heels.  I'm fully on board with all the tinkering they want to do as long as it serves the story and characters. But let's face it, "Someone Else's Story" best fits Florence as she confronts her professional and romantic entanglements upon meeting Anatoly, just as "Heaven Help My Heart" would be better suited to a torn and hurting Svetlana.

Strong's book, with its much clearer connection to actual historical events, has upped the stakes and created a (mostly) on-the-edge-of-your-seat political thriller.  And while the characterizations of the government players can be a little heavy handed, perilously close to stereotype, it is also alarmingly close to current events, both in terms of U.S./Russian relations, but also the whole idea of a madman with his finger caressing the nuclear button.  Perhaps the strongest facet of this element of the book is that both sides are the "bad guys" though it looks to the world like a them-or-us situation.  In today's world, we can see the no-win scenario brought by both sides, even as our own leaders try to shove a them vs us conflict down our throats.  Who knew there'd be a sort of comfort and nostalgia in a musical's portrayal of Cold War brinkmanship? But here we are.

As to the production at hand, a semi-staged concert, it is mostly good news.  Given that format, director Michael Mayer has created a solid presentation, wisely focusing more on performance than actual staging. The musical direction (Chris Fenwick) and orchestrations (Brian Usifer) are strong.  Kevin Adams, as usual, has done a nice job with lighting, and David Rockwell's set with Darrel Maloney's projections add to the rock concert feel of the evening and add a sense of period and place at the same time. On the other hand, the costumes designed by Clint Ramos, range from serviceable - you can only do so much with men's business suits - to distracting and unattractive - Florence's dress is a hot mess, and Svetlana is in a Russian Red dress that looks like something the mother of the bride might wear.

And there is the generally poor (I'm being kind here) sound design by Kai Harada which is a muddled affair, with the orchestra overpowering the soloists many times, and rendering the ensemble largely incomprehensible throughout.  I wondered how anyone who wasn't already familiar with the lyrics, or wasn't close enough to read lips, would be able to follow the story.  To be fair, this is not a problem for just this production.  It is a consistent issue at the Kennedy Center.

Finally, Lorin Latarro's choreography was a very weak link. Primarily, the dances were way too big for the small space the ensemble had to work with.  There were all kinds of leaps and spins, lifts and splits, but none were able to be fully executed because there were too many people in too little space.  More than once, I worried that there'd be a midair collision or two.  As a result, many times the effect ended up being an unwitting tribute 70's cruise ship shows.  That said, the ensemble itself, was very good.  And they are all, um, physically fit (you rock that gym bod, Adam Halpin!), put to its best use in the once good complete number, "One Night In Bangkok."

How wonderful for us that this amazing score was delivered by a first-rate principal cast.  With this more prominent emphasis on the covert "diplomacy" between the KGB and the CIA, both Bradley Dean and Sean Allan Krill shone, managing to bring comedy and a dark sense of foreboding every time they took center stage. Bryce Pinkham was a true standout as the narrator/Arbiter, with razor-sharp timing and a piercing stare. One of the biggest hands of the afternoon went to his "Arbiter's Song." Everything about his performance was excellent.

As much as I love and respect Ruthie Ann Miles, she wasn't really up to even the limited demands of the role of Svetlana.  Apparently struggling with some sort of cold, she sounded nasally and her delivery of every line and song was pretty one-note. She managed tears during "Someone Else's Story," but the emotion didn't register even to those of us in the 3rd row.

The main love triangle was pretty close to perfection, even with one of the three seriously ill and powering through. Ramin Karimloo was truly fantastic, oozing angst and inner conflict. His soulful eyes and powerful voice (!) were utterly charming, with both "Where I Want to Be" and "Anthem" definite highlights of the afternoon. Karen Olivo offered a fiery, strong-willed Florence that was an effective counterpoint to the gentle bear of Karimloo's Anatoly. She has a powerful voice, and when the two of them sang together, it was a little piece of musical theater Heaven right here on Earth.

The wildcard of the penultimate performance was Raul Esparza, who, according to the pre-show announcement was suffering with a "severe throat infection" that he was "graciously" going to power through. That announcement was greeted with a collective groan, and I'm sure every fan of Chess thought, "Wow, 'Pity the Child' should be interesting..." I know I did.  Sure, he was raspy throughout, there were no "money notes" to be found, and he frequently auto-corrected down an octave or two.  But let me tell you, it actually added to his performance.  What an actor! And what a true professional.  I'd go as far as to say that his was the best acted Freddy I've ever seen.  I'm sure his throat is killing him this morning, but it was worth it.  And "Pity the Child"? Well, he got a thunderous ovation from the appreciative audience, and a hearty hand from the cast, who took the moment to break from the show and shower him with love.  Nice to see, and one of those this-is-why-I-love-live-theater moments.

So, Chess remains problematic, but this version is definitely a step in the right direction. As the lyric goes, "each game of chess means there's one less variation left to be played." We are now a few  moves closer to checkmate.