This week’s entry is about the 1964 Original Broadway Cast Recording of Fiddler on the Roof.

My history with this show is limited to having seen the most recent Broadway revival, so this counts as one of my least familiar shows in the entire set. I really enjoyed listening to this recording, and it did a great job reminding me what an achievement this show really is. 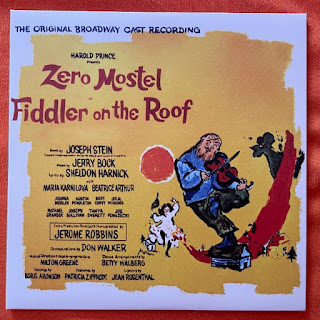 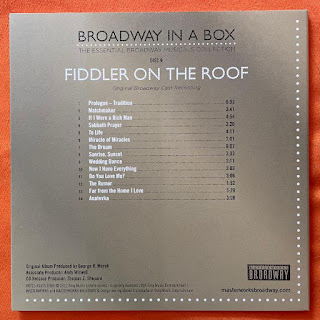 The most impressive parts of the score to me are the handful of longer songs that really amount to mini-dramas, complex numbers that define characters and themes or propel the plot forward. These include the introductory number, “Tradition,” which introduces the main theme of the show as well as its main characters. “If I Were A Rich Man” is a meandering soliloquy that rivals “Soliloquy” from Carousel with its deep exploration of a character and his values. Similarly, "Matchmaker, Matchmaker" does a good job differentiating the daughters right at the outset. “The Dream” really is like a musical within a musical, with many moving parts and funny moments. All of these songs are long without seeming the least bit long-winded, because they have enough to say to justify their length and complexity.

Other highlights include the “Do You Love Me?,” both touching and mordantly humorous, and sung with impeccable comic timing by Zero Mostel as Tevye and Maria Karnilova as his wife Golde. “Sunrise, Sunset” - the soundtrack to a million weddings - doesn’t fail to connect despite its extreme familiarity. And Julia Migenes, as Tevye’s daughter Hodel, is truly haunting in her delivery of the late-second-act ballad “Far From the Home I Love.”

The only songs that don’t quite do it for me are those sung by Tevye’s sons-in-law: “Miracle of Miracles” and “Now I Have Everything.” Although sung (excellently) by different characters - Motel (Austin Pendleton) and Perchik (Bert Convy) respectively - they really cover the same territory, and it’s the same territory covered by thousands of other musical theater songs. They’re not bad songs on their own, but in a score like this they seem to get in the way rather than move things forward. 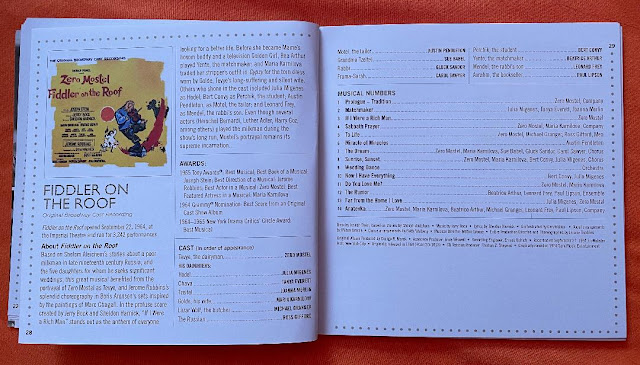 The quality of the recording is uniformly excellent. Mostel, of course, gives a definitive performance that shines through even in audio form. If I have one qualm, it’s the choice to have Karnilova sometimes sing in an off-key screech, a comic touch that I find more distracting than helpful in defining her character. But the two leads are generally wonderful together, a tad less intense and more playful than the corresponding pair in the recent revival.

Finally, I’ll note what an amazing job the creators of Fiddler on the Roof did in writing an entertaining, moving show that focuses with laser precision on some weighty themes that will probably never become irrelevant. People will probably always have to address the tension between freedom and progress, on the one hand, weighed against traditions that hold a community together but also stifle the individual. And, unfortunately, there will probably also be oppressed minorities who are given no choice but to leave the humble homes that they love.

Next up is the 1992 Broadway revival recording of Guys and Dolls.

Thanks, Mike! I'm glad you enjoyed one of my favorite scores. -- Jeff