Broadway in a Box CD Review:
A Chorus Line (OBCR - 1975)
At Christmas a few years ago, Jeff gave me a copy of Broadway in a Box: The Essential Broadway Musicals Collection. He has now given me the opportunity to use his blog to share my impressions of each of the 25 cast recordings contained in the set, in alphabetical order.
This week’s entry is about the 1975 Original Broadway Cast Recording of A Chorus Line.
Let me start by getting my few qualms about this recording out of the way. First, any audio recording of A Chorus Line is going to be missing two of the elements that help to make it the theatrical gut-punch it always is on stage: the dancing, and the stories - particularly Paul’s story, as well as Cassie and Zach’s relationship - that are not told through song. Second, “What I Did For Love” seems a tad static and overly long out of context. Finally, Renee Baughman as Kristine overplays the comedy in “Sing” to such an extent that her story doesn’t quite connect as it should.
Other than that, this is a flawless (if slightly incomplete) representation of one of Broadway’s all-time masterpieces. 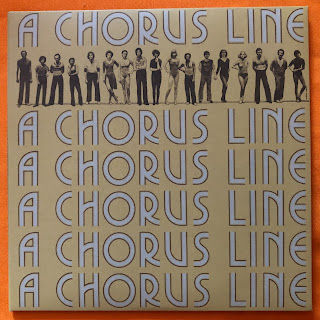 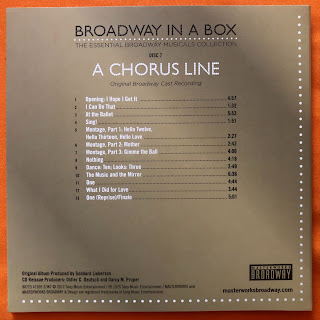 Its success is driven mainly by the incredible women featured on this recording. Priscilla Lopez is a true standout, delivering a darkly funny, dare I say delightfully cold-blooded, interpretation of her solo “Nothing” and a very sweetly-sung introduction to “What I Did For Love.” Pamela Blair, as Val, is equally moving in her heartbreaking song “Dance: Ten, Looks: Three.” And Carole Bishop, as Sheila, melts the listener’s heart with her beautiful take on “At The Ballet.”
But the woman who ultimately steals the show is Donna McKechnie as Cassie, the most experienced auditionee. Even without seeing her dance, “The Music and the Mirror” is a thrilling experience, reaching sublime emotional heights rarely achieved on any cast recording. We can’t see the mirror, but the music is enough in this case. 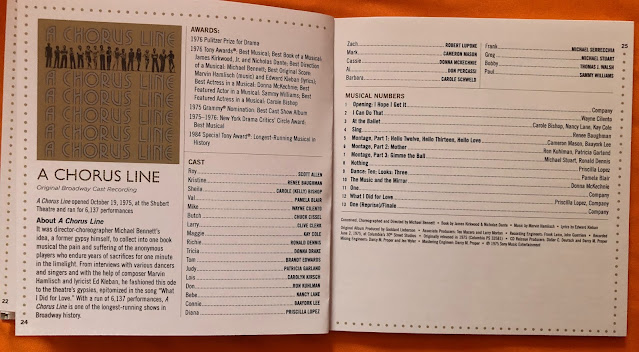 The other highlight of this recording is the lengthy but incredibly dynamic “Montage,” consisting of “Hello Twelve, Hello Thirteen, Hello Love,” “Mother,” and “Gimme the Ball.” All the performers were firing on all cylinders here, as if they knew that their brief part in this sequence represented their best shot at being part of Broadway history and they were determined to take advantage of it. Special mention here goes to Cameron Mason as Mark and Michael Stuart as Greg.
This is a superb recording that makes me impatient for my next opportunity to see this show live on stage.
Next up is the Original Broadway Cast Recording of Company.
Thanks, as always, Mike! I think you'd really enjoy the anniversary extended version of this Original Cast Recording - it has even more material, that may fill in some of what you are missing. And I agree - seeing it live onstage again will be wonderful. Let's hope it's soon! Jeff
Posted by JK at 7:00 AM