As I have often lamented, NOT living in New York has many disadvantages for theater fans.  One night only things and events not planned months in advance are generally out of reach.  Events that happen mid-week keep those of us with the 9 to 5 grind counting our sick days and calculating if we can get into the city on a Tuesday afternoon and home in time for work the next morning.

Well, much smaller, but still annoying, is the inability to read NYC periodicals.  Yes, I could subscribe, but why waste the paper and money for the issues that don't feature theatre?  So, over the last year or so, I've tried to be faithful in looking at these magazines' websites for that which I crave - articles about my favorite shows and show people.  Late last year, two of my favorite NYC periodicals, Time Out New York and Next Magazine featured fun, themed pictorials of my two end of 2011 shows, Bonnie and Clyde and Lysistrata Jones.  I featured the B and C pics HERE.  (Enjoy the memory...)

Here, though is a blog devoted to the Lysistrata Jones spread that appeared in the December 14, 2011 issue of Next Magazine.  And, though the holidays have passed, I figured the fun holiday/winter theme of these pics was still seasonally relevant and a fun way to bring the holidays to a close.  They come from an article titled, "Bad Sweaters-Good Drinks".  The photography is by WILSONMODELS, and the setting  is The Monster, a West Village bar. (Click on the photos to see them larger and as a slideshow!) 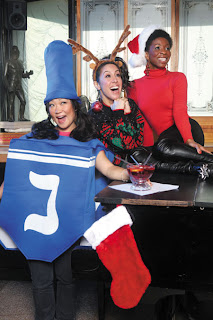 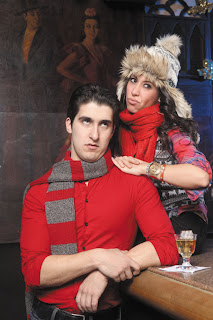 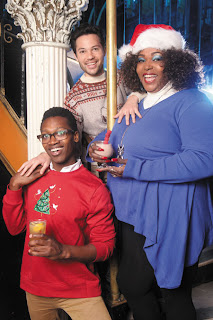 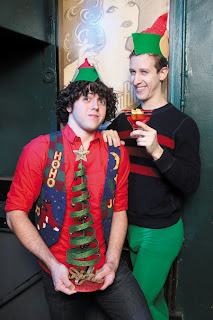 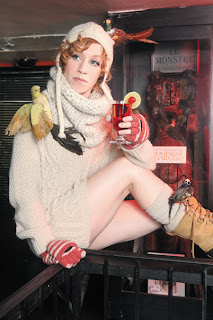 Left: Teddy Toye and Alex Wyse -
Talk about impish elves!
Right: Lindsay Nicole Chambers -
So THAT's what happens to the partridge in a pear tree!


What I love best about these pictures is that it is clear that the cast is a fun-loving and silly off stage as it is on stage.  The last picture, of Lindsay Nicole Chambers, particularly cracks me up.  And the guys aren't too bad to look at, either!

What are you waiting for?  Get your tickets for Lysistrata Jones!

Let me state for the record that no copyright infringement is/was intended by posting these photos.  Rather, I hope by including them, the "exposure" will help other non-New Yorker bloggers will look at Time Out New York and Next Magazine and/or their websites.  Also, Lysistrata Jones could use the extra publicity.

Rate this blog below and leave your comments here, or email me at jkstheatrescene@yahoo.com, or Tweet me!
Jeff
3.126
Posted by JK at 12:00 PM