I know I am WAY behind on my Broadway CD collection - I don't even have the OBCR of The Book of Mormon!  And here I am giving you my two cents worth on a CD AFTER the big departure of its two stars... ah well.  It is still a great production, is as relevant as ever, and all of the supporting cast is still with it (for the time being).  So, without further delay... 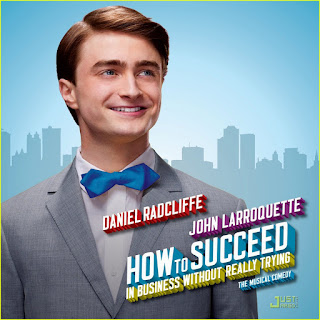 
The Top 5 Reasons You Need This CD:


1.  Completeness:  The has to be the most complete representation of the score.  Songs aside, there are extensive dance sections in the bigger numbers, a great deal of background music and short scenes that include as little as one line of a sung reprise.  Heck, not only is the finale there, but so is the bows music and the exit music!  And the Bonus Track is the most complete version of "The Pirate Dance."


3.  The Orchestrations: OK, purists will probably disagree with me, but I think Doug Besterman's sleek work allows the best of both worlds - modern sound quality and sensibility (fewer instruments, but fuller sound) and a very retro sound - love the verve organ and early 60's jazzy take on the music.  It's like being in a colorized episode of The Dick Van Dyke Show.


4.  The Preservation of Landmark Performances:  Both of the "above the title" stars got to preserve their performances - John Larroquette won the Tony for his over-the-top, blustery, yet smooth J.B. Biggley.  And guess what?  He sings his characterization as well on the recording as he did on the stage.  He is funny and even touching at the end!  And then there is the J. Pierrepont Finch of one Daniel Radcliffe, one of the world's most-famous film stars of all time - and he's only 21!  It is really cool to hear his flawless American accent, and his charm and "schmoozey" quality comes at you from your speakers or earbuds as if he were in the room.  His "Rosemary" and "The Brotherhood of Man" are smoothly sung and sweetly rendered - again VERY charming, even just in audio.

5.  The Supporting Cast: From top to bottom this cast is superior -on stage and on the recording.  The fullness and broad strokes of their comedic and satiric characters come through, be it in full songs, like "Coffee Break" (Christopher J. Hanke, Mary Faber), Ellen Harvey's blasting solo in "The  Brotherhood of Man," and "Love From a Heart of Gold" (Tammy Blanchard is a riot).  And then there is the sublime and smart performance of Rose Hemingway as Rosemary, whose "Happy to Keep His Dinner Warm" might just be the definitive version.  And Rob Bartlett and Michael Park are a riot as the mail room's 25 year man and sexist VP of HR, respectively.  But even the one or two lines each cast member gets to preserve here are great sounding and add much to the character of the show and the recording.


The 3 Drawbacks of the Recording:


1.  Incompleteness: CNN's Anderson Cooper is the narrator at the Al Hirschfeld Theatre.  And so he is here, too.  For a disappointing 2 tracks.  His narration could be as easily added as all of the reprises and 3 line scenes were.  His narration would not only make the recording REALLY complete, but it would help tell the story on the recording, not to mention give a fuller amount of the source material's satire.


2.  The Preservation of Landmark Performances: You get the full characterization of both Larroquette and Radcliffe, proving that they are truly very good actors.  But don't look for either of them to headline a musical that requires actual quality singing.  It is especially evident in Radcliffe's thinner vocal quality in the bombastic opening/title number.  Still, charm and genuine acting almost makes up for it.


3.  The Supporting Cast:  Actually, they are 100% great.  With the extensive amount of dance music included, it really makes you miss the brilliant staging and dances created by Rob Ashford.  Man, did he get ripped off at the Tonys!  I'll have to settle for being to totally visualize "Grand Old Ivy" which is complete with sound effects on the recording!

Rate this blog below and leave your comments here, or email me at jkstheatrescene@yahoo.com, or Tweet me!
Jeff
3.131
Posted by JK at 12:00 PM