BE SURE TO VOTE IN THE "HOT OR NOT" FINALS POLL!

In her liner notes, Faith Prince mentions that she felt a certain uneasiness back in 2010 when this was recorded.  The country was deep in a recession and the residents of Palm Beach, Florida, and the locals were feeling the sting of the Madoff scandal.  She justifies it all by quoting Cabaret.  And there you have the reason why I have a love/hate thing about Broadway stars doing solo cabaret acts.  I love the in your face showcasing of their talents, but really hate the phoney baloney snobbery so rightfully assigned to such endeavors by the public at large.  Fortunately, Ms. Prince's vocal prowess and just enough of her genuine self comes through, keeping this from being fodder for a Saturday Night Live sketch. 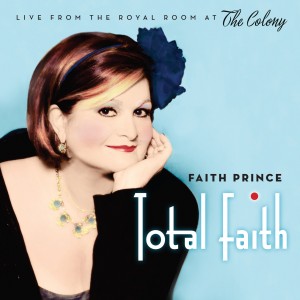 There are a few excruciating moments on this CD.  I literally blushed with sympathetic embarrasment when Prince's patter got really awkward as she joked about people who shop at Wal-Mart and Target, followed by unapologetically snobby guffaws and whoops by the high-brow crowd at one of Palm Beach, Florida's toniest venues.  Really, Faith?  And there is that so-silly-but-so-earnestly-performed "clever" number that is a parody all by itself, "Take Me Back to the Eighties," and the de-rigeur novelty number, "Crossword Puzzle," that is cringe-worthy all by itself.  Don't get me wrong - Ms. Prince sings them well, and even manages to sound like she's sorta in on the joke and knows it isn't as funny as it probably seemed in rehearsal.

But enough negativity - you can program the CD past the mostly long-winded patter and those two songs, all of which is mercifully given separate tracks.  What you are left with i a pretty nice package of numbers by one of Broadway's better character actresses.

Before it is all over, we get to hear a large chunk of her performance as a replacement (and touring) Audrey in Little Sop of Horrors, an all too brief glimpse of her Tony-winning Adelaide from Guys and Dolls, and even a hint at what might be, should she get the chance to take on Mrs. Lovett.  Interesting, too, more for its ballsy-ness than its actual performance is Faith Prince as Elaine Stritch singing "The Ladies Who Lunch."  That number proves that she's probably be a great Joanne, but then, just as she lets herself shine through, she slips back into an iffy-at-best impersonation.  Oddly enough, it is best when she drops the self-conscious Stritch-iness and goes into full Prince mode.

She ends the set better than she started it with a robust "But the World Goes 'Round," a medley of "Take Me Back to Manhattan" and "Before the Parade Passes By," and ends with a lovely "Bless Your Heart."  One wishes that this CD/concert didn't take so long to get to the really good stuff.  All the patter and a couple of missteps take a great deal away from an otherwise fine collection.