It all started when I posted the picture to your right.  It went with a "Face of the Future" feature on Matilda's   Clay Thomson (HERE).  It hadn't even been posted 10 minutes when I got three emails asking "who is the other guy in that picture?"  By the end of the day, more than two dozen of you wrote to ask the same thing!  So I figured I'd better reach out to that "other guy."  A little Googling and a few Tweets later, and I got one of Broadway's nicest "new guys," Christopher Rice, to do an interview, so you could get to know "the other guy in the picture."  These days, he's got the daunting task of being a 7 track swing in a little show called The Book of Mormon.  And now, without further ado, here are:

QUESTION ONE:
Jeff:  Hi, Christopher!  Thanks so much for taking time out to chat with JK's TheatreScene.  You are the very first cast member of The Book of Mormon that I've had the pleasure of talking with, and you are the first "Swing," too!  So, let's start there... Being a swing is one of those things I hear people - even avid theatre fans - talk about, but with little actual knowledge.  Maybe you can clear it up for us.  What does a swing do?  How does that differ from being an understudy?  And are you "on call" or actually at the theatre every night?  Finally, what specifically do you cover in The Book of Mormon?

Christopher: Thanks for having me. A swing’s job is to be able to jump in for any role that you cover at any moment. You learn all of their onstage performance responsibilities as well as their offstage traffic. Your job is to make the show run as if the actor usually in the role was still there and for everything to run smoothly. At this point, I cover the 7 “Mormon boys” and all of their features. Understudies are usually onstage every night in an ensemble or smaller role. There are such things as on-stage swings, but in my case I show up at the theatre every night and am ready to jump in when needed. I also perform when people take vacations, etc. 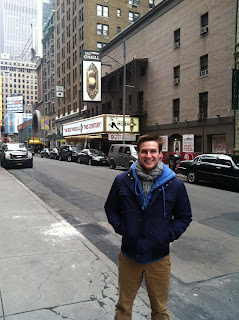 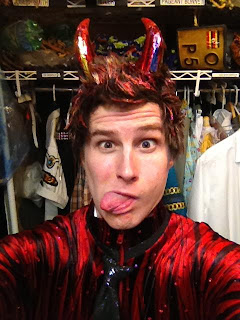 Christopher: (Left) Me with the marquee the day I got "the call!"
(Right) In my "Hell Dream" costume 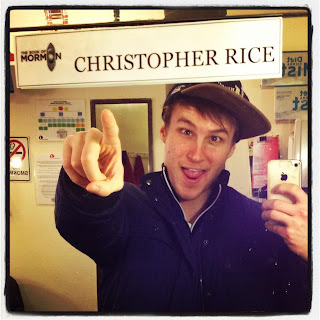 Christopher: Moving into my dressing 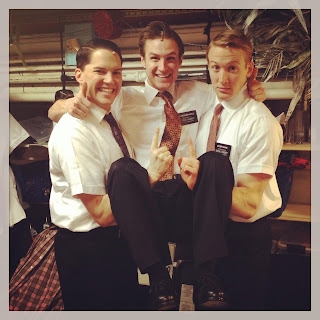 QUESTION TWO:
Jeff:  How often have you gotten to go on in the show?  Have you ever had to swing one track for one show and a completely different track the next show?  How about a mid-show replacement?  No matter what, though, it must be a thrill to be a part of such a huge cultural phenomenon!  Are the fans crazy when you arrive at and/or leave the theatre each day?  Has your family been to see you in the show?  They must be very proud, huh?

Christopher: For a many number of reasons, I have been on quite a bit since I began in early March. I haven’t gone on for all 7 tracks yet, but I have done shows back to back as separate characters. Yeah, it is a blessing to be a part of such a great musical with such supportive fans. Hopefully my family can make the trip to see me in the show soon! 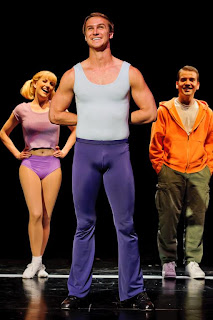 Christopher: Me as Mark in A Chorus Line
at Stages St. Louis - Summer 2011
(Photo by Peter Wochniak)

QUESTION THREE:
Jeff:  You've also been a part of two other shows that are true American cultural touchstones.  First, your BOM bio says you've been in A Chorus Line four times!  Is your background in dance?  What roles have you played in that show?  As a performer, how does that show touch you/affect you?  Why do you think it continues to strike a chord in audiences nearly 40 years after its debut - even non-performers?

Christopher:  I’ve worked really hard to become the best singer, dancer, and actor I can be. I was whipped into shape in my college dance classes, but I pushed myself really hard because I had a long way to go. In A Chorus Line (my favorite show by the way!) I’ve played both Mark and Mike (“I Can Do That”). Well, technically in one production I was Mark and covered/went on for Mike as well, so I guess I have done Mark twice and Mike two… and a half times. It is such a great show that anyone can connect with because it is about more than performing. It is about putting yourself out there for what you love. 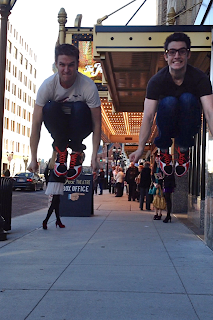 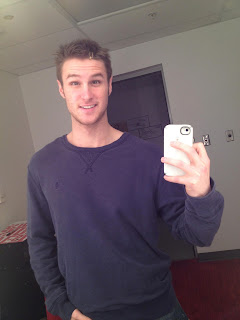 Christopher: (Left) Outside the Fox Theater in St. Louis with Clay Thomson
on the West Side Story Tour
(Right) On for Tony (the role I covered) in West Side Story

QUESTION FOUR:
Jeff:  The other show, West Side Story, you did as part of the recent National Tour, right?  Talk about some tough dancing!  What was your favorite number to do every night?  How tough was doing that show in a different place every week (or sometimes less!)?   Your favorite city?  Did audiences respond to the show the same way all over the country or was it different depending on where you were?  What was the best part of touring?  The worst?

Christopher: West Side Story is another one of my favorites and a great first Broadway tour to learn from and experience performing every night! The dancing was exhausting and exhilarating. The vocal responses from audiences varied throughout different regions, but people left to their feet at the end of the show almost every night. Favorite city? Well, we played all over the US, Canada, and even Japan… so I would have to say Tokyo! Best Part of Touring: Seeing the world with great friends. Worst Part of Touring: living out of a suitcase and no home-cooked meals. 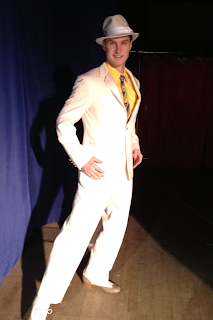 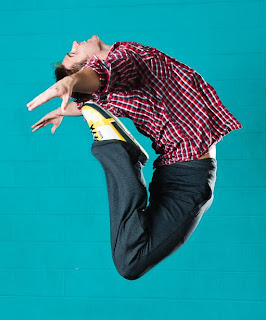 Christopher: (Top) Backstage in my "Blue Skies" costume
on the White Christmas Tour
(Bottom) ...me in the air! :-) 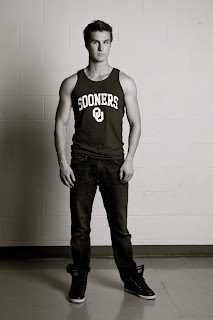 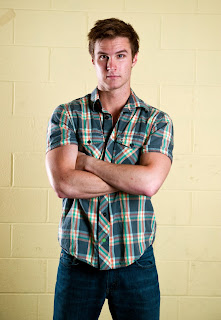 A couple of random photos from christopherriceonline.com

QUESTION FIVE:
Jeff:  Finally, back to being on Broadway.  How do you stay prepared to work, often on a moment's notice?  What kind of daily routine do you maintain to stay in shape?  How do you continue to work on training for your craft?  Do you hope, some day, to have a permanent role in the show?  Is there a role outside of BOM that you are dying to try?

Christopher: I am still relatively new so I am constantly reviewing formations and vocal parts. I work out 5 days a week to stay in shape and love taking dance classes and voice lessons to stay at my best. I am loving my time there as a swing and am learning a lot from my experience. I look forward to whatever roles and experiences I will have in the future!

Jeff: Thank you so much, Christopher!  Say "Hello!" to all of the cast from all of us at JK's TheatreScene!
Christopher: Thanks for having me!

Find out more about Christopher at http://christopherriceonline.com/
(Photos courtesy of Christopher Rice)