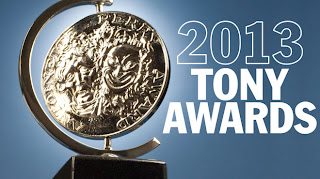 By now, everybody and their brother has weighed in on this year's Tony Award nominations.  It's the usual outrage and jubilation, dismayed and pleasantly surprised, the commercially viable choices made versus the artistically viable choices made (and even the occasional pleasure when a choice is both commercial AND artistic).  What I have to say is probably nothing new or terribly original, but I do appreciate that some of you actually care what I think about it.  So here goes...

At this point, I can only really talk about the musicals of the season - I saw all of the eligible musicals.  Over the next weeks prior to the awards ceremony, I'll be seeing some of the plays - The Nance, Vanya and Sonia and Masha and Spike, The Assembled Parties and Lucky Guy.

I was pleased that the shows I reviewed most favorably got the most nominations (give or take a few)! (Click on the "Show Reviews" tab at the top of the blog to read my reviews)

This year, like last, Mike beat me in the "Will Be Nominated" portion of our guesses, and I beat him by just one vote in the "Should Be Nominated."  Almost every time I was wrong about who WILL be nominated, it was because I replaced a SHOULD be with someone I tried to think too much about!  Check out our nomination guesses HERE.


A lot has been written about people being "snubbed."  Again, I can't talk about plays with any knowledge, so I can't tell you if Bette Midler, Al Pacino, Sigourney Weaver or Scarlett Johannson actually got snubbed.  But I can speak about musicals with this caveat: It is only a "snub" if the person truly deserved recognition and didn't get it; it is particularly bad when another person did get recognition over a more widely regarded individual or production.  For example, George Hearn not being nominated for Best Featured Actor for Scandalous is, to me, not a snub.  Still, here are a few people and shows I think got "snubbed":


I don't agree that Bertie Carvel is a lead or Will Chase is featured or Stephanie J. Block is a lead.  In the case of the latter two, unless the revival is substantially rewritten, the eligibility from the original production should be followed, regardless of revival billing.  John Jasper is a leading role and Edwin Drood is a featured role.  All of that said, all three deserve a Tony nomination for thieir work, so I am glad they are in the running!


I understand the committee's decision regarding the Matildas.  But if it has anything to do with each girl only doing 2 shows a week, then I think every actress who does two shows a week in Evita, Miss Saigon or any show where the actor/actress playing the leading role is regularly scheduled for two a week should be considered for Tony Honors.

OK... I could probably say more, but I think I've said enough.  Closer to Tony time, Mike and I will predict who we think should and will win.  Until then, let the arguments continue!