REVIEW: Vanya and Sonia and Masha and Spike

It's almost all good news at the Golden Theatre these days.  The newly refurbished (since The Normal Heart) theater is beautiful.  The play onstage has had its limited run extended.  Playgoers needn't be put off by the title, either.  Christopher Durang's Vanya and Sonia and Masha and Spike  may sound like you need a degree in Chekovian drama to follow it, but rest easy.  Even if you don't know plays like The Cherry Orchard or, more obviously, Uncle Vanya, or the myriad of other classic dramas Durang references, the play is a laughfest unseen on Broadway this season, accessible to all.  If there is any bad news to be had, it is that tickets will be even more scarce when it picks up the Tony for Best Play.  It is that good. 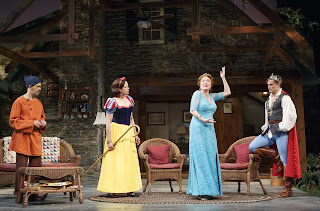 Before you even enter the theatre, you know you are going to see something odd and funny - the logo sports a dwarf, a queen, a nearly naked prince in a crown, and a Disney-version Snow White.  Something strange is afoot: it certainly doesn't match the title!  When you are seated, the stage before you is filled with a cottage in the woods, stone base, wood beams, and quaint country accoutrements.  There is something both magical and realistic about David Korins' scenic design and Justin Townsend's lighting design.  The same can be said for Emily Rebholz's spot on, witty, slightly crazy costumes.  Together, the designers have created the perfect visual metaphor for the themes, character and story of Vanya et al.

Directed at a breakneck pace by Nicholas Martin, the two and a half hours flies by.  Full of riotous jokes, scalding one-liners and some laugh-til-your-gut-hurts physical comedy, the play has the audience's full attention from opening line to final bow.  Durang has crafted the kind of play that seems to rare today: it has a point - it is certainly a poignant look at family relationships - but it doesn't wear it on its sleeve or hit you over the head with pretentious theatricality.  It is also an actor's dream: each character has depth and multiple facets to to their personalities; each character has his or her moment to take center stage and show off their skills; each character gets an awesome exit speech; and best of all, the actors get the chance to really work at some intriguing group scenes.  The cast, you can tell immediately, is having the time of their life up there, and that they have grown into a real family as the run continues.  It is the audience that is the ultimate winner here, though.  With Vanya, you get some of the best, most fully realized performances seen in a Broadway play in some time, and some of sharpest comedy balanced with the pleasant surprise of heartfelt emotional depth. 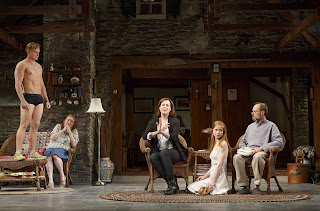 The play centers on a family of middle aged siblings, two of whom have never lived anywhere else but that Pennsylvania cottage, having taken on the responsibilty of caring for their long-ailing parents.  Now alone, the realization that in all this time, they have never taken time to create lives forthemselves is taking root, and they are miserable.  In contrast, their sister left the nest to become a movie star, and has had the opportunity to really sample all that life has to offer.  She has come home to deliver some life-changing news, and to show off her decades younger boy toy, a dense, self-absorbed actor.  Add a clairvoyant housekeeper, a naive, starstruck neighbor girl, and a bizarre costume party to the mix and mayhem insues.  Over the course of the evening, the family drifts apart, argues, and comes together as they realize maybe, if they stay together, the twilight years won't be so bad. 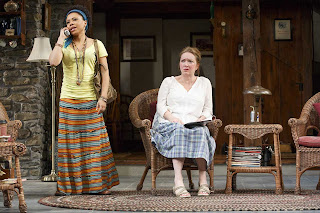 The cast gives a virtual study in ensemble acting with each performance, with each contributing superb timing,  physical comedy and a fascinating emotional range.  It is hard to imagine this play without any one of these actors, even in the smallest roles.  Liesel Allen Yeager plays the naive neighbor girl, probably the hardest role in this type of play - she provides the outsider point-of-view, a little conflict, and isn't often the center of attention.  And yet Ms. Yeager manages to make quite an impression - enough of one to get her own exit applause in act two - no small fete considering the company she keeps.  In the other small, but higher impact role, the clairvoyant housekeeper, Shalita Grant takes the stage with the force of a hurricane.  She is absolutely hysterical and commanding.  It is no surprise that she has earned a Tony nomination for her efforts.

Spike, the smarter-than-he-acts boy toy, spends much of his time cavorting around the stage either in his underwear or dressed like Snow White's prince.  Larger-than-life and outwardly testosterone-filled and dumb as a stump, Spike comes into this quiet rural setting like gangbusters.  His portrayer, Billy Magnussen, is a force of nature, an imposing physical presence, full of sex appeal, and an equally imposing command of physical comedy.  Given the surprising emotional core he gives this character when he could have just relied on the tight abs and outward comedy of Spike, it is no surprise that the Tony nominators have rewarded Magnussen with a Tony nod for his Broadway debut.  Let's hope this is just the first in a long line of Broadway appearances for him. 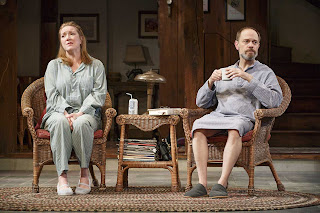 No stranger to Durang's plays, the astonishing Kristine Nielsen brings so much depth and range to the emotionally dwarfed, self-loathing Sonia, who has spent her life feeling like the third wheel having been the adopted child.  Nielsen mines comic gold out of the angst that comes when one realizes that in keeping everyone else happy for your whole life, when everyone else is gone, you are left alone with a life unfulfilled.  A real downer, right?  Not with Tony nominee Neilsen in charge.  She plays each depressing note with the flair of a clown playing a violin - there is humor, and just as importantly, heart in her pathos.  After this, you may never look at a tiara, Maggie Smith or a coffee mug the same way again.

Who better than a reknowned Durang interpreter AND movie star to inhabit the role of fading movie star, Durang heroine than Sigourney Weaver?  Her confidence and stage presence make her every entrance and exit an event.  Lovably self-absorbed, Weaver's Masha is a whirlwind of conflict.  For all of her ego and bravado, Masha is as insecure and unhappy as the rest of us.  She, like so many movie stars, is coming to a point where she's beginning to see her star fade, and is no longer as able to wrap herself up in all of the benefits of stardom to get by.  When Masha talks about taking on the role of a grandmother, not an action hero, one can't help but wonder of Weaver herself has felt the sting of youth-crazed Hollywood.  It is to Ms. Weaver's credit, that she's not doing a parody of what could be herself.  Through it all, one senses that both Masha and Sigourney are just getting started after all.  Why she is not Tony nominated is beyond me. 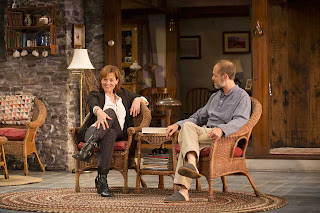 Finally, there is the wonderfully understated performance of David Hyde Pierce, who as Vanya, has the wonderful opportunity to have a character that builds instead of coming out of the gate at full tilt.  In retrospect, it is a marvel to watch Pierce bide his time, supporting his fellow cast members with some solid acting, but never stealing the scene.  That is, until Vanya reaches the breaking point, and Pierce unlashes a five minute monolgue on the past, present, future and his place in the universe that brings the house down.  One wonders how he has anything left at the end of an 8 show week.  For anyone who doubts that comedy acting isn't difficult and full of skill, they need only watch Pierce's brilliant performance to see the truth.  It is hard work, and making it seem natural and effortless is the gift of a master.

Vanya and Sonia and Masha and Spike is, from top to bottom, onstage and off, the gift of many masters.  Durang and company have given Broadway an early Christmas gift to be sure.