I love it when a play is so engrossing that you lose track of where you are, when you lose yourself in a bygone time.  I also love it when you learn a little something while being transported on an emotional journey.  Casa Valentina is one of those plays that did all of that and more for me.

Leave it to Harvey Fierstein to bring the humor and humanity to what is still a misunderstood and taboo topic.  That the play wears its heart and its politics on its sleeve isn't surprising from this celebrated writer.  But that certainly doesn't mean that there aren't some wonderful surprise plot twists, not to mention a certain prejudice that never even occurred to me.  And there is a very satisfying ending that is purposely ambiguous, forcing you to think well beyond the curtain call, not only about what will happen to the characters, but also about where you stand on the play's issues.

Director Joe Mantello has crafted a warm, rich production that revels in its realism, but also in its sheer theatricality.  The opening tableaux of the play's ladies at various stages of transformation is breathtaking, and the staging just escalates in creative scene after scene.  He also allows each scene to build like a small play within the play, allowing us to take in each moment, while the tension and drama builds.  Matching the tight, artistic direction is a spectacularly realized physical production that takes us away and helps to keep things moving as well.  The lovely set designed by Scott Pask functions as both a picture postcard getaway and a shadowy memory book as well.  Justin Thompson's warm lighting design further carries out the dreamlike mood of the idyllic scene juxtaposed against harshly lit reality checks.  (How Mantello, Pask and Thompson were overlooked by the Tonys absolutely mystifies me.)  But the real design stars here are Tony-nominated costumer Rita Ryack and the wig, hair and make-up styling of Jason P. Hayes, whose work brings this deceptively complicated piece to beautiful life.  They manage to walk that fine line between serious/sincere transvestism of the play, and the campy drag that I'm sure many in the audience come in expecting.  All of these design elements, the direction and the script combine to bring the season's most compelling, emotional and important play. 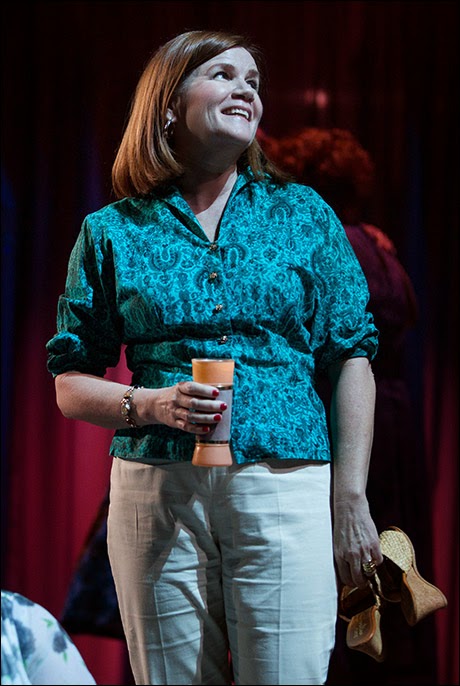 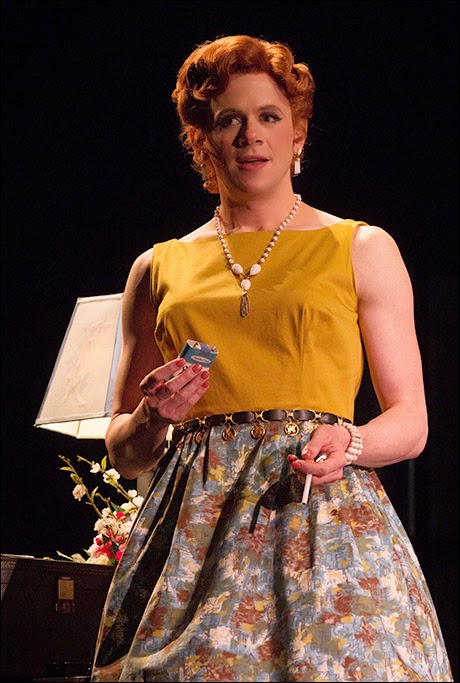 Mare Winningham is Rita and Nick Westrate is Gloria

All of that would be for naught, however, if it weren't for the impeccable ensemble cast.  The small but powerful role of an angry daughter dealing with a lifetime of her elderly father's risky decisions is played with superb intensity by Lisa Emery.  The other woman in the company, Mare Winningham has earned her Tony nomination with a marvelously quiet, measured and powerful performance.  Only her voice and a few well placed pauses betray the pain and uncertainty in this otherwise strong, incredibly supportive wife.  I found myself revering her acceptance, and being heartbroken at her play ending epiphany.  As the newcomer to the group, Gabriel Ebert, may be giving the most surprising performance of the year.  Less than twelve months ago, he was an over the top, flashy monster of a dad, earning a Tony for Matilda; now he is a sympathetic, nuanced and low key young man struggling and scared.  Ebert is giving an amazing, moving performance.  The elder-statesmen of the cast, John Cullum and Larry Pine give their usual 100% performances here, one as pioneer, the other as a frightened man who hides behind his wig and lipstick to cover an even bigger secret. Perhaps the character most like playwright (at least outwardly) is played by the very excellent Tom McGowan, who finds strength in a wicked, if self-deprecating, sense of humor.  McGowan also expertly delivers a very sobering, enlightening speech that changes the lives of some characters forever. And the fiery Nick Westrate, who makes a beautiful, womanly figure, shrewdly represents a smart next generation. 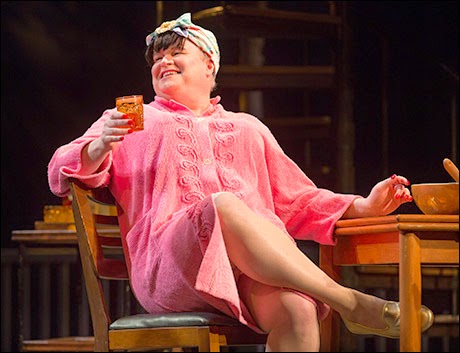 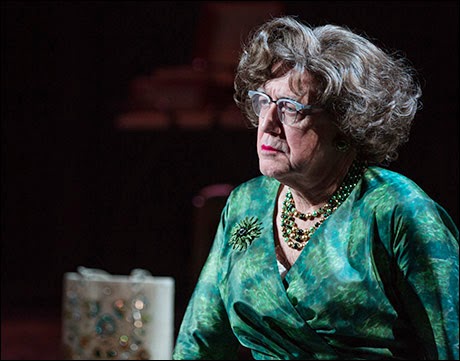 Tom McGowan is Bessie and Larry Pine is Amy

The two characters embroiled in the central conflict and larger issues of the story are in the very capable hands of the incredibly versatile Patrick Page, and the mesmerizing (and infuriating) Reed Birney.  Page's deep voice is a startling reminder that there is a man underneath his female persona, the titular Valentina.  It is that same voice that makes for his male-self's greatest defense and mask.  Like many of the people in this play, George/Valentina is grappling with much deeper concerns than which dress to wear to dinner.  The one visitor to this private getaway who seems (seems) most sure of her place in society is Charlotte, and Mr. Birney is chameleon-like in inhabiting the many faces of this complex person.  The line between Charlotte and the man behind her is practically non-existent.  But this surety of purpose reveals some rather nasty beliefs and a jaw-dropping bigotry that takes the word "bitch" to a whole new level.  Both Page and Birney are actors at the very top of their game. 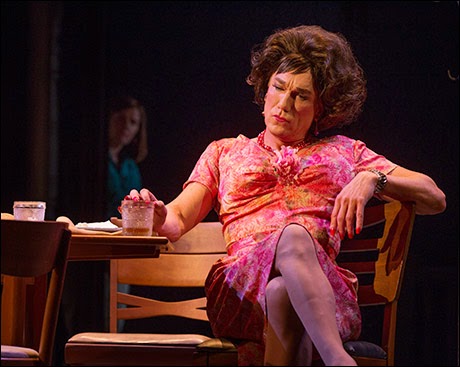 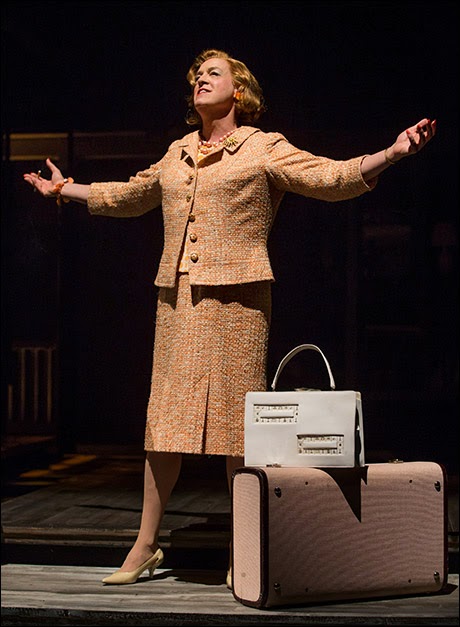 Patrick Page is Valentina and Reed Birney is Charlotte

Last year's Best Play made the case for a much needed Tony Award for Ensemble acting.  Casa Valentina should seal the deal.  This company is so superb.  The show was just extended through June 29.  Miss them at your own peril.