Were anyone else starring in Lady Day at Emerson's Bar and Grill, there would really be no other reason for this slight play with music to even come close to a Broadway theater.  For like every other bio-play/bio-musical this season, playwright Lanie Robertson lets a great opportunity pass right by.  Just like the Wikipedia/Behind-the-Music treatment Carole King and Janis Joplin have gotten earlier this season, another icon with a ton of baggage, Billie Holiday, gets gussied up in a slick presentation, with mere glimpses of what might have been.  I've asked it before, and I'll ask it again: if her life cried out for dramatization, why does the result lack so much drama? 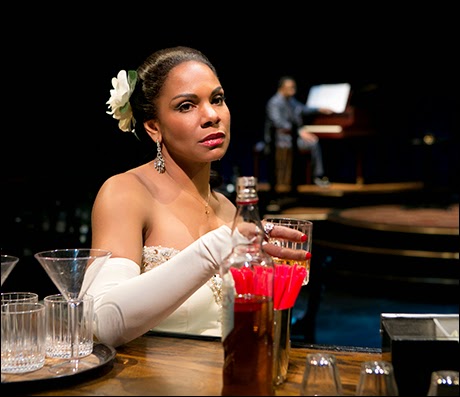 There are a few moments in the show that lack the awkward shoe-horning of facts, and actually reveal the context in which Lady Day suffered, and some of the many reasons for her pain.  One of those moments is a story about the segregation of the South, and the dehumanizing treatment she got in a restaurant.  It lead to one hell of a punchline, and a hearty laugh from the audience, followed by a sort of stunned, awkward silence as we realized her humor about it covered the pain and anger, and we were witnessing the sad long-term result. And there are two gasp-inducing seconds - one when she nearly falls off the stage, and the other, when she drops a reality bomb about being raped at the age of ten like it is just one item on a list, and immediately laughs it off while the rest of us sit, mouths agape. 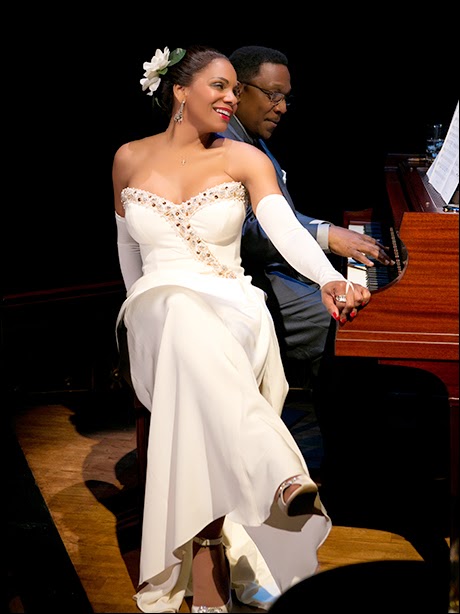 As a production, the show is very good, too.  James Noone has transformed the Circle in the Square Theatre into a smoky bar, full of late 50's charm, and Robert Wierzel's savvy lighting easily alternates between the shadowy nightclub and softer memory lighting that illuminates a series of Victrolas in the background.  ESosa's costume design hints at the Lady Day that used to be - a simply elegant white gown that some how seems destined to be ruined, like the broken woman that wears it.  And Lonny Price has done everything he can to give the piece decent pacing and emotional peaks and valleys, where a lesser director might struggle to find them.

The play with music features a menu of standards played by a most excellent jazz trio - George Farmer, bass, and Clayton Craddock, drums.  The third member, pianist Shelton Becton, also plays a minor character, and while he isn't a great actor, per se, his bland line readings fit his place in the show.  Why would a great pianist, unprepared to talk to the audience, sound like a great actor if this were really happening? 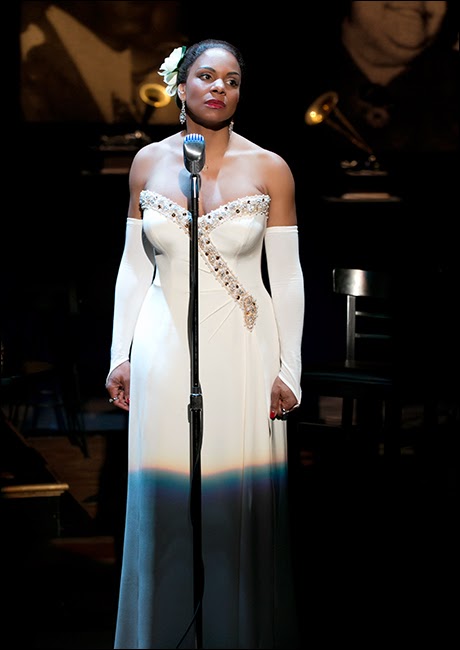 Of course, the entire reason for this being where it is, and, honestly, the only reason I wanted to see it, is Audra McDonald.  When she makes her entrance through the audience, the applause is for Audra.  We are in the presence of probably the greatest theatre actress of our time.  And then she turns around and faces us.  She starts to talk, and Audra McDonald vanishes in less than a second.  The applause abruptly stops and there is a collective gasp.  Billie Holiday - a broken shell of a woman near the end of her life - stands before us. Now I have never heard a recording of Holiday's speaking voice, and have only the slimmest familiarity with her as a singer, but McDonald's characterization is mesmerizing, and how accurate her mimicry is becomes instantly irrelevant.  (I'm told she's spot on, but it matters not to me.)  What is so astonishing, and utterly thrilling, is watching this brilliance evolve into a drunken, self-pitying mess.  You'd swear she was getting really drunk, that the vodka bottle wasn't really full of water.  And it is a sad descent - only the coldest person wouldn't feel for the desperate life that lead this remarkable talent's impending demise.  Audra's fans who love to hear her sing may be shocked at how she uses her voice to croak through song after song, only occasionally giving hints at what Holiday's voice used to be.  Lady Day standards "Strange Fruit" and "God Bless the Child" are particularly powerful.  I would not have missed this career pinnacle performance for the world.


It seems like Ms. McDonald is destined to become the most Tony-winning actress in history, and that she will complete her collection of actress awards.  I won't be surprised at all if this is the performance of hers that makes that happen.  Thank heaven that she, unlike the woman she's playing these days, still has many years ahead of her to delight us all yet again.