I was actually very much looking forward to seeing Heathers: The Musical.  I loved the film - its darkness, its smart humor, its scathing attack on my very generation.  And I really was excited to see what Kevin Murphy and Laurence O'Keefe could come up with, they of such dark humor lineage as Reefer Madness and Bat Boy, and smart, funny lyrics as Legally Blonde: The Musical.  Well, color me disappointed.

If you have read my blog with any regularity, you know I have waked out of only three shows in over 30 years.  It was almost four. The first act of this show is basically horrible, if I may be blunt.  The book and the score are all over the place. Having actually lived as a teenager at the same time that Heathers takes place, I can say that lyrically, and book-wise, the authors have a handle on all of the lingo and pop culture references of the mid to late eighties - references to Live Aid and the preppy lifestyle abound.  But I am pretty sure that the majority of the audience didn't get them, as they were tossed out with the hope that some of it might stick. It doesn't, mainly because the authors have done little to make any of it relatable to any other generation.  And it wouldn't be too hard; kids today aren't all that different from the 80's preppies.

The songs range from the Broadway-style opening, "Beautiful," to the pseudo-eighties naughty song, "Candy Store," to the odd anthem song, "Dead Girl Walking," more en vogue now than then (a missed opportunity to bridge the gap).  And then there's the gross-out song that panders to the lowest common denominator all about that (excuse me, ladies) teenage boy malady, "Blue" balls.  Even keeping the subject matter, there had to be a way to make it less obvious and clever, and more importantly, dark.  I'm pretty sure the writers knew that, too, since the reprise was almost exactly that.  It involves an alleged oral sex act with a clever play on a "Blue" homonym.  Just about the only thing in act one that hinted at what might have been was the terrific act one closer, "Our Love Is God," a dark commentary on the kind of angst that the original film so wonderfully explored.

The multiple personality disorder that plagues Andy Fickman's direction only makes matters exponentially worse. Over the course of the first hour, the style and tone ranges from overly earnest, to broad slapstick, to sit-com quality cadences.  The pacing is equally problematic - long stretches drag, others whip by with a manic intensity.  Only occasionally does the staging really work, and most of that is due to the spot-on MTV-like production numbers craftily choreographed by Marguerite Derricks.  Especially notable is the entrance of "The Heathers," complete with a dreamlike haze and a mock reverential receiving line of cafeteria tray toting underlings.  And all of the mayhem occurs on the single must unattractive set I've seen in years, designed by Timothy R. Mackabee, with only occasionally interesting lighting by Jason Lyons.  Costume designer Amy Clark got most of her ideas from the film.  I'll just leave it at that.

There is also a pretty fair share of bad acting, astonishingly by two of New York's finest actors, Daniel Cooney, and, gulp, Tony-winner Anthony Crivello.  It doesn't help that they play a multitude of characters each, all of them weak stereotypes.  And you don't have time (or feel the need) to get too attached to them as the dads to the popular jock boys (the marginally funny, but way too old looking Evan Todd and Jon Eidson), which is probably why their big act two number, "My Dead Gay Son," falls flat.  (Haven't those kinds of numbers been done to death? Pun intended.)  The other "adult," Michelle Duffy, does much better work, creating two distinct characters that have some impact, in spite of also fighting against tired stereotypes.

For some reason, we stayed for act two, and I am really glad I did.  You see, Heathers: The Musical is a rare thing in musical theatre - the second act is so much better.  It (except for the aforementioned "Dead Gay Son" number) veers sharply away from camp, ramps up the satire, and achieves remarkable unity of tone, style and direction.  In short, it is everything I thought it would have been from the start.  There's a witty and sharp teen vigil number, "Shine a Light," that figuratively and hilariously literally, shines the light on where these kids are.  And there's the mock-touching (and a little bit really touching) "Kindergarten Boyfriend," all about how nice we are as children and how rotten we become as we age, sung by the woefully underused Katie Ladner.  The best two songs in the show - the most appropriate and tuneful by far - "Lifeboat" and "Seventeen" are also sung by three of the show's primary assets. 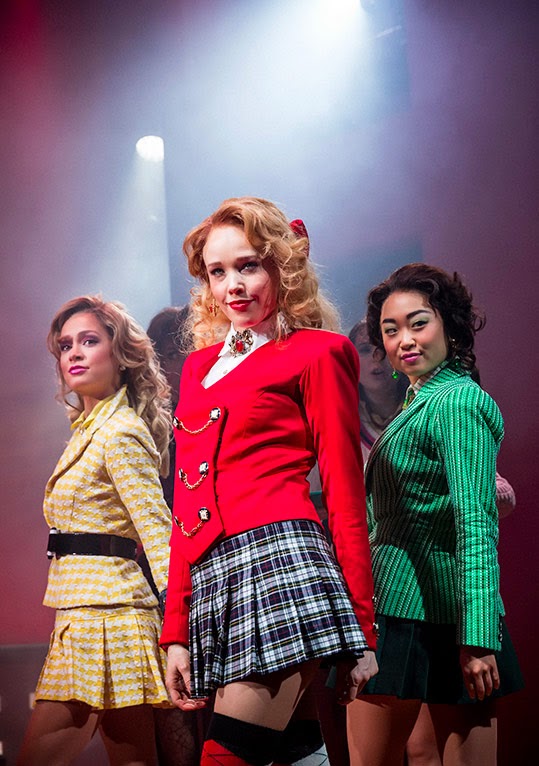 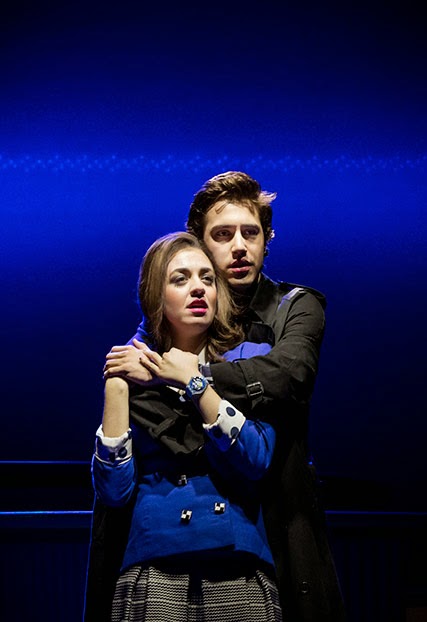 Those assets are the five leads, all of whom rise way above the material and bipolar direction.  The three Heathers are very funny, disdainful sneers practically tattooed on their smug faces.  That rigidity makes their eventual lost-at-sea moments of weakness all the more delightful.  Alice Lee and Elle McLemore hit all the right notes in every way, while "head' Heather Jessica Keenan Wynn almost steals the show, with her dynamic energy and handle on the very darkest material - in act one, it was as if she and her co-stars were in a different play than everyone else.  (And is it me, or is she the spitting image - and talent - of a Side Show-era Emily Skinner?)  Disney star Ryan McCartan brings a smart evil to the role of JD, the loner with lots of hidden anxieties, not to mention homicidal tendencies.  It is fun to watch him twist and turn between wise guy and nearly sympathetic sociopath, sometimes even within a line or two.  I have a feeling that in another twenty years or so, he'd make an incredible Sweeney Todd.  Keeping all of it together and making act one even remotely decent and doing mind-blowing things in the second act is star-in-the-making Barrett Wilbert Weed, as Veronica, who gets way more than she bargained for when she negotiates her way into popularity.  Ms. Weed commands the stage, both as a comedic actress and as a dramatic one.  The girl has a powerful voice, impeccable timing, and a gift for crying on command.  I can't wait to see her in a show worthy of what she can bring to the table.

I also suppose that time and history have been unkind to Heathers: The Musical.  Teen suicide is no laughing matter, and in a post-Columbine world, the outsider in a long black coat, bringing a bomb and gun to school is a scary reality, not an exaggeration meant as a cautionary tale.  One has to wonder if there will ever be a time when that kind of subject matter can be fully entertaining.  I guess I overestimated the writers' ability to do just that.  Heathers: The Musical could have been really interesting.  Half of it was.