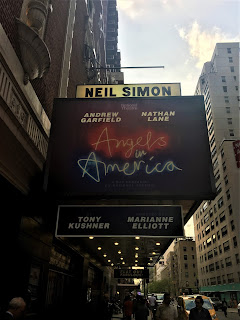 The first time I saw Angels in America, it was the original Broadway production of Millennium Approaches. It was amazing, life-changing theater. I remember a very intense feeling in the the audience, as if each word held the secret of life. It was very intense and extremely emotional. Together we laughed, grew silent in seething anger, and wept in despair.  In fact, it was the weeping I remember most vividly - particularly the sobs that greeted the reveal of Prior Walter's first lesion. It was a special matinee performance during Gay Pride weekend in June 1994, and the wounds of the AIDS crisis were fresh.

When I revisited Angels this past weekend, it was, once again, an intense, emotional experience. This time around, the laughs were easier and even heartier than before.  And the anger felt more intense.  But I didn't hear (or even feel the need for) crying this time around. A lot has changed in the quarter century since the play premiered.  AIDS is no longer a death sentence; the shame of being queer is less an issue (I pray), and homosexuality is much less of a cultural novelty/taboo.  Of course, American politics these days are as frightening as they ever were, probably more so.  You can practically hear our president wailing, "WHERE'S MY ROY COHN??" The balance has shifted in the last 25 years: before, the AIDS tragedy was in the forefront, set against a backdrop of politics; now, the politics are in the forefront, set against a backdrop of the AIDS crisis. It is quite telling that a speech about racism in America got the biggest hand of the night this time around. Ultimately, these different but equally intense reactions to this epic speak to the enduring quality of  Tony Kushner's work. In short, this brilliant master work was must-see theater then and is now.

Marianne Elliott has once again proven that she is a master at staging epic theater. Just as she did with War Horse, she has again staged large scale pieces - think big production numbers - that have a wow factor that leaves you mouth-agape and breathless. Whether is the lonely snow scape of Antarctica, a full-out fight with an angel, or a "backstage battle" between a prophet and a heavenly flock of angels, the epic scenes are a feast.  That is not to say that they ever overshadow while the rest of the play gets lost.  No. In fact, the small scenes are just as epic - words and actions cut like daggers, and the ebb and flow of emotions is so carefully planned, that the "small" scenes feel epic and the "big" stagy scenes feel intimate.  The scenic design (by Ian MacNeil and Edward Pierce), lighting (by Paul Constable) and the score (by Adrian Sutton) -Tony nominees all - all contribute to the intricate chaos created by reality and fantasia.  Each element informs each moment to hit a perfect balance.

But a brilliant script and equally brilliant direction only works with a cast that is up to the task.  This cast is more than up to it. They elevate it.  Each actor plays several characters, but none more than Tony nominee Susan Brown and Amanda Lawrence. Ms. Brown has the widest range of roles play, and, frankly, isn't entirely successful with all of them. Neither her "rabbi" or "oldest living Bolshevik" are completely devoid of her femininity, but they still serve their purposes.  She intrigues as a ghostly presence as Ethel Rosenberg to be sure. But she more than acquits herself in the pivotal character of Hannah Pitt, an unlikely heroine who undergoes and beautiful transformation. Watching that happen is one of the great pleasures of Perestroika, just as watching Ms. Lawrence's enigmatic, mysterious and thrilling Angel is.  Her physicality, at once broken and strangely athletic, is riveting, and her line delivery is mesmerizing.  The effect is fantastic and otherworldly. And kudos to her, her "Angel Shadows" and the design of Finn Caldwell and Nick Barnes, and the team behind the entire movement/fight sequence - absolutely breathtaking.

With incredible presence and flair, Nathan Stewart-Jarrett's Belize, is a fiery force of nature. His comic timing is spot on, as is his gift for walking that line between just enough and excess.  But most remarkable is his innate ability to show us, with razor-like precision, the searing anger and proud resistance that lies beneath every barb.  The other raging inferno of the cast is the wonderful James McArdle, who, as loud-mouthed but weak, politically charged but self-righteous, Louis Ironson, manages the impossible.  He makes a very unlikeable, cowardly man compelling nonetheless. It is a shame that the Tony nominators couldn't make room for these fine actors.

Lee Pace, as Mormon Joe Pitt, delivers an amazing performance that makes you feel every one of his character's multitude of emotions. Not just because he is very tall and strongly built, Pace towers over others by using his physicality to inform every scene he is in.  Sometimes menacing, sometimes surprisingly weak, his presence and bearing draw your eye and it is difficult to look away. Watching his Joe fight, break and rebuild is one of this season's greatest pleasures.  The same could be said for Denise Gough's breakthrough performance as anxiety-ridden, pill-popping, is-she-hallucinating-or-is-she-facing-reality Harper Pitt. This woman is a force of nature, giving one of the great performances of the season. Riveting from start to finish, Ms. Gough allows us to admire, revile, be fascinated by, turn away from and feel everything for this woman.

I must admit that generally I feel that a little bit of Nathan Lane can go a really long way.  When he is on, he is ON, and you never really forget that you are watching Nathan Lane as Nathan Lane.  And at first, his performance here is just that. For about 5 minutes. Then, all of a sudden, you are watching a hateful, disgusting human being lord over anyone and everything in his path.  In short, Mr. Lane is giving the performance of his storied career. This is a ferocious, balls to the wall tour de force turn that is so intense, it is a relief when he appears as a Ghost of Prior Past full of his trademark flare. A full week later now, and I am still having flashbacks of his venomous delivery and the shocking realism of his seizure-filled descent toward death.  Far and away, though, the one who almost steals the show all to himself is the amazing Andrew Garfield. There simply aren't enough adjectives to describe this performance.  I will say that seeing him perform here has been one of the great privileges I've ever had in 35 years of theater going. He creates such a complex character in Prior Walter that it is like watching the proverbial onion being peeled, layer by painful layer, right in front of you. Mr. Garfield is just incredible - a performance not to missed. I am now a fan.

Smartly, both plays are staged very differently, with Millennium Approaches the more conventional of the two, and Perestroika the more "fantasia."  In both cases, though, fasten your seat belts.  Angels in America is one hell of a ride.

(Photos by J. Kyler, Brinkhoff/Mogenburg and H. Maybanks)
Posted by JK at 7:30 AM