Shortly after they announced that a musical version of Disney's Frozen was coming to the stage, the powers that be came up with several possibilities.  (You can see all of them HERE.) Of those that weren't selected, this one that replicates the Norwegian tradition of rosemaling (painting seasonal nature on the wood in their homes and buildings) is my favorite. I love the colors and the imagery. I think, though, that title coloring is too bright for the rest of the design.  And I also think that excluding Anna from the image leaves out a significant element of the show's themes.


The logo that was finally chosen for the Broadway musical version of  is, in my opinion, the best choice for many reasons.

First, and foremost, it meets the basic criteria for a good logo for the marquis. Name recognition alone will cause passersby to take notice.  The contrast of the white and the vibrant blues is also striking and eye-catching.

Second, the "Disney's Frozen" in the traditional Disney font, and a close, but (importantly) not exactly the same logo as the animated film signals quickly that this is, in fact that Frozen. Now, here's where it gets a little dicey. For parents who have kids who love the film, it's a good indication of what might be to come. The same for other fans of the film (like me). Then there are those that wouldn't touch it with a ten foot pole. Face it, there is a certain amount of backlash against this property (see the Tony nominations as a possible indicator, true or not). But just as true, people who don't like it won't buy tickets anyway.  It's the on the fence and grown-ups only ticket buyers that this branding is most likely to influence.

Third, it is important to notice that the animated figures - especially Olaf - are nowhere to be seen. If they were trying to draw in the family audience only, the cute characters would be all over the branding and all over the outside of the theater as well.  It isn't.  A smart move, especially considering that the stage version has taken great strides to be deeper and more adult in its treatment of the story. 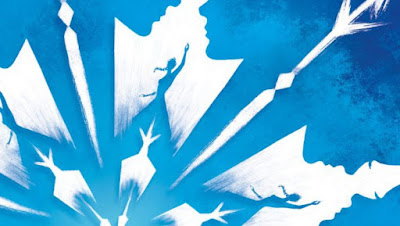 Finally, and again, wisely, Disney has gone the icon route (taking a page from the mega musicals of yore - think of the logos for Les Miserables, The Phantom of the Opera, Cats, etc.) which eliminates the need to change a logo featuring the actual actors as the show's run continues (watch out, Mean Girls).  It isn't so girly that boys (and men) would automatically shun anything with the logo on it.

And the icon itself is genius. The frozen fractal has fun "hidden" images that are fun to discover as you look at the logo more closely. The inner section shows a silhouette of Elsa, arm raised, unleashing her power, while the outer section of the snowflake reveals the two sisters looking at each other, again in silhouette. It is clever and beautifully rendered.