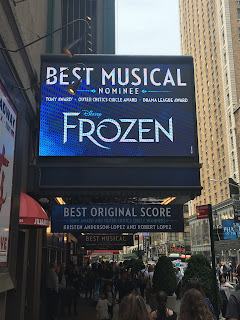 It's interesting how one's expectations can color one's experience with a show.  As a big fan (and I'm not ashamed of it, either) of the film, I have been excited for the Broadway musical since it was announced.  And despite my desire not to, I couldn't resist reading the chat boards about the tryout,  and later, the New York previews.  I guess you could say I went in to the St. James Theatre with mixed emotions - I was excited and dreading it all at once.  For the most part, my trepidation was mostly unfounded. Disney's Frozen is an entertaining and delightfully grown-up affair.

The music, by double EGOT winner Robert Lopez and his wife, Kristen Anderson-Lopez is much expanded, and is pretty seamlessly added throughout the show.  I suppose it is fair to say that the new songs aren't as "comfortable" as the ones fans of the film are already familiar with, but if we are being totally honest here, if the entire score was fresh to the ear, we wouldn't know which ones were new, would we? None of the new ones stick in a bad way, musically at least.  In fact, I rather enjoyed two of the new songs quite a bit - "Monster" and "Dangerous to Dream." "What Do You Know About Love?" and "Kristoff Lullaby," and to a lesser degree, "Hans of the Southern Isles" also add to the characters of Anna, Kristoff and Hans.  One thing I think would have added a lot to the show would have been an 11 o'clock duet for Anna and Elsa - their portion of the finale sequence offers an all too brief glimpse of what might have been.

Jennifer Lee has crafted a surprisingly straight forward, traditional musical book, and as such, it comes across at times as rather plain, not extra magical.  In it, she has traded (often by necessity) some of the movie magic for a deeper exploration of feelings.  Not all of her choices are quite right - the opening sequence of Act Two, which has stretched a cute, beloved and brief scene from the film, into an odd tribute to Hair meets A Chorus Line.  I mean I get why it's there, but... yikes!  The first act flies by, but the second seems a bit off balance.  The second act opening gets things going at a snail's pace, and the rest of the second half alternates between rushing things (Hans "turns bad" in the blink of an eye) and slowing down too much ("Fixer Upper" wears out its welcome by about two minutes too long). All of that said, the show is funny, emotional and interesting far more often than not.

Probably in large part due to the nature of the book, director Michael Grandage has shaped the evening rather conventionally, and that is both good and bad. On the not so good end of it, there isn't much creativity in the staging, and as I said above, the acts feel unbalanced.  On the good end of it, it's super easy to follow, and his direction never interferes. And in staying out of the way, he allows his design team to really shine.  Talk about "egregiously overlooked." The design of Frozen is stunning - count me among the "I didn't miss a full-blown ice castle" camp.  Christopher Oram's sets are massive, colorful and exciting to watch as they transform the stage easily.  His costumes are also a visual feast of color and creativity.  You can see where your money was spent for sure.  Then there is the lighting by the always amazing Natasha Katz, who paints the stage in hundreds of wonderful colors in evocative and thrilling ways. But the most magical visual thrill comes courtesy of Finn Ross, who has given Elsa as much live magic as the film did, with his jaw-dropping video design. (Tony Awards people: get a projection design award SOON!) Trust me: you miss A LOT if you don't sit in the mezzanine with this show. So much happens on the floor! And Ms. Katz and Mr. Ross create an absolutely astonishing "freezing" effect at the climax that is not to be believed!

What would a Disney show be without non-human characters?  Frozen provides several, including a whole race of Hidden Folk (a perfectly suitable substitute for the movie's trolls), led by the exotic Olivia Phillip and the imposing and buff Timothy Hughes. While their big number is a tad too long, it is, nonetheless, well-danced. (The same can be said for all of Rob Ashford's dances - a challenging mix of Broadway and athleticism, and his ensemble is up to the task.) Olaf, the world-famous snowman, here played by Greg Hildreth, is cute, but nothing really new - we've seen this puppetry before, and while it's hard to imagine Frozen without him, it is painfully obvious he wasn't really necessary to the stage version. His blink and you'll miss it number, "In Summer," is a missed opportunity to beef up the role and add some flair. Instead, the number is as flat as the pop-up, two dimensional set that accompanies it (Oram's only misstep, really.) Hildreth, frankly, seemed uninterested in doing anything beyond the expected. Not to worry, though, there is real magic in the other non-human on the stage, a sweet reindeer named Sven. Embodied by the very limber Andrew Pirozzi, he had amazing presence and dare I say it, chemistry with his co-star. The design was clever, and I smiled every single time he came on stage.

The suave John Riddle gets to play the juiciest male role - dashing prince and evil villain, and he's terrific.  You can see why Anna falls for him instantly. Best of all, he is at the top of his triple-threat-ability, singing, dancing and acting with a swagger that walks the fine line between sincerity and cartoonish (I mean that as a complement). Even when he goes "bad," you'll find yourself watching to see what he's up to; he's a great adversary for Queen Elsa. More impressive, is the utterly charming performance of Broadway newcomer, Jelani Alladin, who is surely at the start of a long, successful career.  It says a lot that he can keep up with the demands of the character Kristoff. He has to sing and dance, of course, but he has to be an adventurous hero, a physical comedian, a love interest, and have chemistry with a reindeer.  He doesn't just keep up with these demands, he succeeds in nearly stealing the show from the two leading ladies.

All I can really say is that whatever Disney is paying them, Caissie Levy and Patti Murin are worth double or more. Not only do both of them bring out the familiar traits of these royals effortlessly, they both mine the script for every last nuance of each. These are female characters for today: strong and independent. Even though she ends up with a great guy, you never for a minute believe that Anna couldn't make it without him.  Ms. Murin has spunk, energy and nerve to spare - and she sings so beautifully in character. And did I mention how hilarious she is?  Then there's Ms. Levy, who must feel the weight of the world daily leading up to "Let It Go."  She sings it with an effortless but powerful, vulnerable but strong, way that makes it much better than the film version.  I'll admit to quickly wiping my eyes before the lights came up for intermission. But she's also so much more than that one song, of course, and hers is not an easy task, as the majority of her stage time is alone. It is hard to imagine a better pair of princesses. (As a side note, I'd like to say that the two girls who played the younger versions of Anna (Zoe Glick) and Elsa (Mimi Ryder) were also terrific.)

Overall, I'd say that the creative team did a great job of crafting a more mature story, while retaining the familiar and beloved film elements for the stage. The truth is, most of the people who will see this show will get their money's worth. Kids will be thrilled to see Anna and Elsa and hear their favorite songs; adults will enjoy the deepening of the relationships. The proof is in the reactions of the audience - quiet kids, spellbound, and parents, relieved that their kids are happy and that they can enjoy the show, too. That may have been the most surprising thing of the whole afternoon.