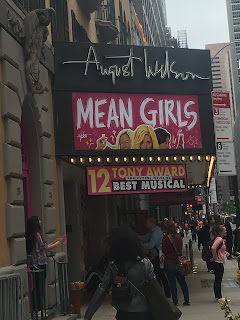 It is rare that I even think of leaving a show at intermission, and yet I considered it when I saw Mean Girls.  But when my theater buddy Mike expressed his positive feelings about it, I decided to stick it out. Turns out I'm glad I did. The second act was quite enjoyable, even though its quality only served to point up all the reasons I disliked the first act. If I hadn't stayed, I'd have missed moments of real heart, a couple of really good songs, and an "it only happens in live theater" moment that was a lot of fun.

Judging from the audience's screams of delight, I was in the minority in my feeling of disappointment at this hyper, excessive musical version of the delightfully subversive, wry film. Those screams greeted each beloved line from the film, no matter how loud or shrill the delivery. Granted, Tina Fey knows what her audience wants, and has updated her screenplay enough to make it relevant and even occasionally newly funny. The problem really lies in everything that surrounds it. Save for a couple of really nice songs in act two (namely, the final number "I See Stars," and the empowerment anthem, "I'd Rather Be Me"), and a deliciously wicked motif for chief mean girl Regina George culminating in "Watch the World Burn," Jeff Richmond's score is so bland it registers only as loud monotone. And, unfortunately, Nell Benjamin's lyrics are just as uninspired. Her work here is maybe one-fifth the quality of the vastly superior and clever work she did for Legally Blonde, and it is so far from the level of Fey's book, one would think they never consulted with each other.

It seems the future is here in terms of stage design (not Scott Pask's best effort), which is basically a wall of high-def video screens and a few set pieces.  Like the rest of the show, the projections (designed by Finn Ross and Adam Young) are slick and fast changing, but look more like an old video game or Saturday morning cartoon, than anything truly fresh. The most clever it gets is the changing Burn Book pages before the show even starts.  It's a fancy one-trick pony, and it's boring before the first scene is over. Gregg Barnes hasn't done anything too exciting with the costumes, settling for stereotypes over a chance to use them as a subversive way to comment on kids today. (The gay kid wears a Judy Garland t-shirt and the goth artist girl wears Doc Martens and torn fishnets? Shocking. And the drama kids edgiest show t-shirt comes from Dear Evan Hanson? I'm not buying it.) Even the normally stellar Kenneth Posner's lighting is by the numbers.  My point is: bright, shiny, fast and loud doesn't equal quality.

To me, the obvious tell that the show is less than the sum of its parts is the strain of Casey Nicolaw's staging and direction. It stinks of desperation - play it loud, overload the senses, and end every number like it is a grand finale. The problem here, and Nicholaw knows this, is that if every moment is at a level ten, eventually it feels monotonous and exhausting.  For example, having the cast wheel itself around in student desks, changing direction each time there is a "class change" is clever. But doing it for every classroom scene after that makes the novelty wear off quickly. What to do? Up the ante, and have groups roll on and off the stage on self-propelled cafeteria tables. It's not nearly as interesting as he thinks it is. Speaking of that cafeteria scene, with "Where Do You Belong?" a number about school cliques, the whole thing is a blatant rip-off. Sorry, but the tray choreography comes from another, superior, high school piece, Heathers, and the song and staging bear a striking resemblance to a similar scene in High School Musical. Both of those shows did it first and did it better. Additionally, Nicholaw recycles the same five or six hip-hop-adjacent dance moves in every number.  Well, not every number; there is his now trademark tap number, "Stop," which opens the second act, and is a retread of every tap number he's done before.  I fear we are in for more of the same with his next high school musical, The Prom. I hope I'm wrong.

Finally, in act two, things slow down occasionally, the songs vary a bit, and the actors are given the chance to show some heart.  It's no wonder that they look the most comfortable and confident then, too. It is here where you can see what a musical version of Mean Girls could have should have been.

It is most of the cast that elevates the show.. The ensemble does a nice job keeping up the energy, and the dancing, if repetitive, is well-executed.  One wonders how they will look after a few months, though.  Will they stay sharp or get bored? Or will they simply be exhausted?  I can't imagine this having a long shelf life before it starts to look like a shell of its former self.

The principal cast is, for the most part, very good - better than the material they are performing.  The "adults" serve the piece well enough: Kerry Butler does her usual excellent job at broad characters, almost making fun of it while giving it all she has, and Rick Younger is fine as the principal. Kyle Selig is charming as boy-crush Aaron Samuels, and he's pretty funny, too. His duet "More Is Better" (ironic...) is a highlight of the second half. I wish all three had more to do.

One character I wish I had less to do is Damian, at least as overplayed by Grey Henson, who isn't too gay to function, but simply to excessive to function. Will history look back on this "woke era" portrayal of the snarky gay teen they way we look back on Jolson doing black face?  Maybe so. As edgy as this wants to be, this character is an insulting stereotype.  It doesn't help that Mr. Henson never tries for more than the obvious, and has about the same punch as a Trump Tweet. The audience eats him up (and so, apparently, did the Tony committee) and that says a lot about who this is aimed at, and how far we still have to go in LGBTQ portrayals.

On the other hand, Damian's partner in crime, Janis, at least as gloriously played and sung by Barrett Wilbert Weed, steals the show. True, she has (by far) the best song in the show, "I'd Rather Be Me." But Ms. Weed also has a tremendous gift for comedic timing and more importantly, a natural easiness marked by a talent for economy in her acting. Less is more with her, which makes the times when "more" is necessary really stand out. In the face of so much excess, she is brave enough to hold back. Another actress with the same nerve is the vastly underrated Kate Rockwell, who is hilarious just standing there. She tosses out delicious line after delicious line with an electrifying stillness; she puts a great spin on the stock dumb blonde character. For the life of me, I don't see how these young women have been consistently overlooked in all the awards nominations. More fortunate is critical darling Ashley Park, who as obsessively insecure Gretchen wears her heart on her sleeve and gives a performance to match.  More often than not, she's good at what she does, but if I'm honest, my first thought was, "gee, that'll be easy to replicate for the National Tour," but nothing particularly award worthy.


Mean Girls boils down to the good girl vs the bad girl - hardly a stretch for musical theatre, but it is what it is.  At least, both of them, Erika Henningsen as Cady, home-schooled odd ball, and Taylor Louderman as Regina, Queen of the Plastics, are at the top of their game.  Ms. Louderman struts and muscles her way around the stage with a fun finesse, and her blase delivery is wonderfully dismissive and biting all at once. She is also experienced enough in the genre to know when to hold back and then make the big moments count - her "Watch the World Burn" is a highlight of the season. Meanwhile, Ms. Henningsen is the backbone of the whole show, and not just because she's the main character who actually has a fully developed arc. She's the one who manages to be seen even when the staging and visual and aural cacophony threatens to swallow her whole. She's got a great voice, presence and acting skills deserving of better material to work with. I'm already looking forward to what she does next.

The best part of the whole show was a moment that probably doesn't happen very often. A series of microphone issues brought the show to a halt during a key confrontation scene between the two leading ladies. Those kinds of live theater mishaps are almost always fun.  But this one really stood out because it forced the show to be quiet (for once), the actors got to let their guard down and actually have genuine fun together, and it showed they they could get the job done without all the crazy.  Would that the rest of the show been that - genuine, fun and slightly less.  As Janis might have said, I really wanted this show to be "tits," but it is mostly a bust.