Let me say from the outset that I am really looking forward to seeing The Prom in a few weeks. It is topical. It is new and original. It features some of my long time favorite Broadway performers, and it is put together by some of my absolutely favorite theater artists. So much to look forward to.

My thoughts on the show logo are...complicated. Probably too complicated for a fun musical comedy. You see, I like the logo to look at.  It is bright and colorful, with a pleasing aesthetic. I want to look at it closely and enjoy the details. Sounds like A+ stuff, especially considering my criteria - a logo should be bright with a pleasing aesthetic, enough to make you not only notice it, but stop and look at it. 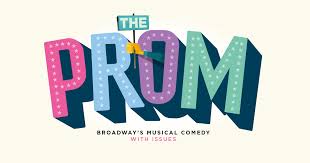 I also have to admit that I think that as advertising material, this is mostly a fail. First of all, there's the title. While it is big and eye-catching, it also seems alienating. Who is the audience for this? Will a grown up look at this and say, "The Prom? It must be one of those shows for teenagers, like High School Musical." Or worse yet, "The Prom? Oh, God. Mine was a nightmare... who did I go with, anyway?" Will a teenager look at this and say, "The Prom? Hmmm...maybe...let me look closer..." So far it's a good thing - a logo should entice. But then... "Look at those cartoon people. They look vintage. And grown-ups with picket signs? This is for old people...nope!" Best case scenario? The young theater-goer will remain interested enough to look into the cast... "Why isn't somebody I've heard of in this? Who will we stan?"

I've always said that a logo should hint at what a show is about. "Hint" is the operative word here. There's nothing in this artwork (save for the troublesome title) that suggests a prom.  It does suggest stereotypical high school students and protest marches. And these days, that may actually work. Still, I'm at a distinct advantage here.  I know about the story. The logo makes 100% sense if you know the story. You would understand who those sign carrying oldsters with jazz hands are. You would understand the butch girl in the lower corner, ostracized by the rest of the image. But if you don't know the story would you look at this and be interested enough to find out about the story?

At this point, there's nothing to be done about the title. But I'm not sure why the promoters aren't aiming for both the young and old.  Why aren't they talking up the Mean Girls connection to the director? Why aren't they hawking the controversial teen-needs-support story line to Dear Evan Hansen fans? By this point, Caitlin Kinnunen should be the name on everyone's lips. And their Twitter timelines and Instagram stories. As luck would have it, it opens well before the reemergence of Be More Chill, why not try for some of those kids who are waiting until February for their Chill pill?


This show also has a built in opportunity for teens and their parents to see something they may both enjoy. So why aren't they trying to appeal to the parents with making a connection to the show via The Drowsy Chaperone (writers and Tony-winning star - check)? Or playing up to true Broadway fans by pushing Brooks, Christopher, Angie and Josh? To be fair, The Drowsy Chaperone suffered from the same odd title/target audience. Maybe this will be hit on that order. (I hope so.)