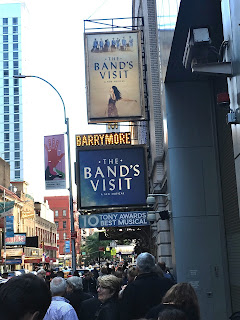 Made my third trip to the desert with the band Sunday afternoon, and I'm thrilled to say that it was just as enchanting, affirming and emotional as ever. The Band's Visit is one of those shows that is so rich that every viewing brings you more. The little things you notice - from ensemble business in the background to the details of the set and props add more layers to this important story.  Every grand gesture, every laugh, every emotion, every silence is so spot on. The company is not resting on its ten time Tony-winning laurels. If anything, the show is stronger than ever.

I really took time to pay close attention to the set and lighting (by Scott Pask and Tony winner Tyler Micoleau, respectively).  I was taken by the texture of the walls, the furnishings of Itzik's home, and the way the the turntable is used, not overused, to add to the flow of evening. And the lighting is as emotional as the story, using light, and importantly, shadow to carry us through one day of life in the middle of nowhere. The warm daylight hues, and the cool blues were lovely. But just as effective was lighting from the florescent tubes! 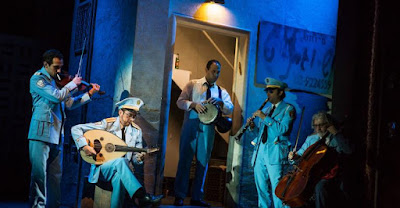 I don't think I was effusive enough about the titular band (and the rest of the orchestra). But I have to say, they were on fire! Such skill! Such passion! The score continues to amaze me, and taking special notice of the band members on the sides (or rolling in and out on the turntable) as they offer accompaniment and interludes adds yet another great layer.

The cast is such a solid unit. And they move through the 90 minutes with an ease and surefooted-ness that comes with a year of performances. But the energy and intensity is as fresh as if it were opening night. No phoning it in here. John Cariani is an infectious performer in everything I've seen him in, but here he's at a whole new level, and he's just remarkable, especially considering his character is a self-described lazy loser. And I'm continually amazed by Adam Kantor, who does more with a performance that consists mostly of staring at a phone than any five actors do with more vigorous roles. He is enchanting, and "Answer Me" remains a highlight. As I have said, this company is so tight there are no weak links. And one actress really stood out to me this time around - troubled housewife and mother Iris, played by the completely wonderful Kristen Sieh. What an emotional roller coaster she takes us on! At this performance, Papi was played by Ahmad Maksoud (who I saw the first time) and he was terrific - an always interesting combination of boredom, resignation, awkwardness and heart.


Once again I was taken by the suave moves of the utterly charming and, yes, sexy Ari'el Stachel, who was completely deserving of his Tony Award. Yes, he has swagger and oodles of charm, but the part of his role that really affects me is when that bravado leaves his face and you can see that he struggles like all of us to please and earn respect. The man he wants to please is the band leader Tewfiq, now played by the formidable and ultimately warm Sasson Gabay (he played the role in the film, too). He acts the role beautifully, and it is easy to see why his men want his respect.  And it is easy to see why Dina, the lady who saves his band for the night, is drawn to him. Tony winner Katrina Lenk is, if anything, even more captivating than ever. She exudes a fluidity, a sensuality and a mysteriousness that is absolutely mesmerizing. Both of her big numbers, "Omar Sharif" and "Something Different," were fantastic highlights.

I always felt The Band's Visit was worthy of its acclaim and 10 Tony Awards. After last Sunday's performance, I'm more sure about it than ever.