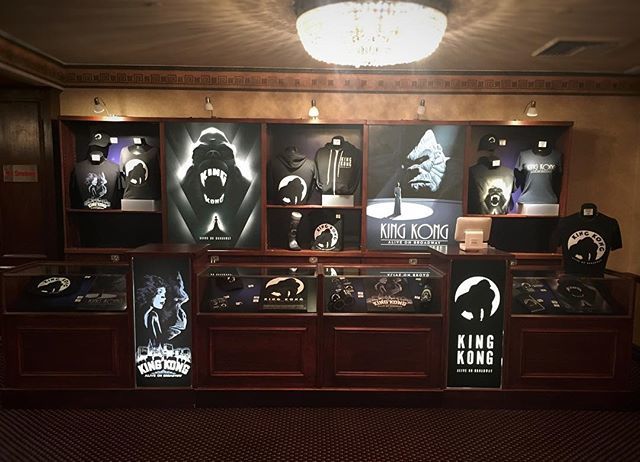 I was interested to read the initial reports of previews of King Kong, as I always am. But I was really interested to read on one of the message boards about a reaction to the merch, and in particular, the fact that they sell four different versions of the show's window card. The reaction wasn't about how the four logos looked, but rather that there were four of them. The poster felt it was a mistake, that it would muddle the show's branding. I think they may have a point, as far as that goes.  But as a lover of Broadway show art, I'm very interested.

As always, I consider these things as a commercial enterprise - will they sell tickets - first, and as art pieces second. To that end, let's look at each design: 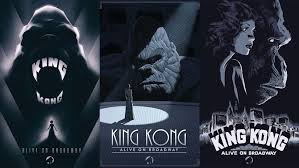 All 3: While there is something very "30's Hollywood" and that takes it back to the original black and white film version. It makes sense if the story is a re-telling of that version (I haven't seen it yet to confirm...), and many people are familiar with that image. But what about those of us who remember either the '76 Jessica Lange (campy) version or the more recent Jack Black/Naomi Watts action flick? (I can't speak to the even more recent Kong: Skull Island.) Still, I like the "black and white" effect of them all. I also like the tagline "Alive On Broadway." "Alive" is somehow both dangerous and fun.

Version #1: This is the one I like the least. I get it. Kong is big and scary, and the woman, while much smaller faces him fearlessly. And while the title-as-teeth thing is somewhat clever, it isn't easy to read quickly, and despite it being the brightest, most central thing on the poster, it isn't what I look at first. Not to be contradictory, though, the effect of it is pretty terrific as part of the theatre marquee. Grade: C-

Version #2: Of the three, I like this one most of all, but more on a lesser of three evils kind of way. I really like the art deco font of the title (again very '20's/'30's). And I understand the actress in the spotlight, though it's my least favorite element. But what I really love is Kong partially visible in the beam of light.  I love that he looks "realistic" and even resembles the star of the show - the puppet. Grade: B

Version #3: If the top 2/3 of this poster were as great as the bottom 1/3, this would be a real winner. I love the style of the font.  It reminds me of an old movie poster, and I love how the old New York City skyline looks surrounding it. But I really don't like the top. At. All. Is it trying to draw a comparison between humans and apes? Is it, by making them equal in size, making them equals in the animal kingdom? In any case, given the current climate and the show's casting (which I applaud, for the record) it makes me a little uncomfortable. Grade: C

Version #4: (Visible, I think, in the left center glass case above, and a riff on the image at the right) This one speaks to the message board concern about branding.  It is a (very) simplistic icon, reminiscent of the '80's hey day of logos like those for Cats, Phantom, Les Miserables and Miss Saigon. The difference is that this is so simple, it's dull.  There's no real creativity (like dancers in the eyes or an Asian calligraphy letter that looks both like a face and a helicopter) or any emotional pull (like a fallen mask and lone rose or a pitiful waif colored like the French flag). Despite the silhouette of a woman as the space between Kong's arms, the overall effect is more like something you'd get for contributing to a gorilla sanctuary. Interesting that they went with this for the Playbill. And that is the font that works the best. Grade: C 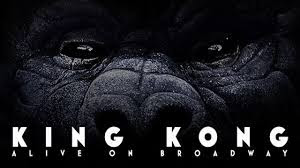 The version I like best isn't the logo: I love the image (again "realistic" and like the puppet at the same time) and the font is the best one. Grade: A (They should have used this on everything.)

One last thing of note... not one of these versions identify this as a musical.  Are they trying to distance themselves from that little secret?