The Friday 5: 5 Sondheim Shows On Video 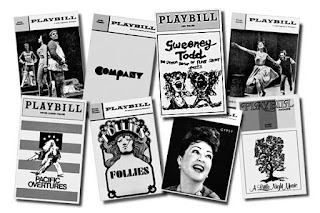 One of the best things about being a Sondheim fan is that there is no lack of material to watch or listen to. It seems almost every major show or Stephen-related event is recorded (though I'm still bitter about the lack of cast recording for the recent Pacific Overtures revival...). So this week, here are my top five favorite shows by/about Sondheim that have been preserved to video. I'm sure we won't agree, so feel free to email, Tweet, or send me a pic of your favorite on Instagram - addresses above!

The Friday 5:
The 5 Best Sondheim Shows on Video

5. Sweeney Todd: The Demon Barber of Fleet Street - Original Production
This is my absolute favorite Sondheim show. Angela Lansbury is my favorite actress, and George Hearn is one of my favorite actors. They are great together, and they sing the hell out of the score. So why is this only number 5? Well, the filming is clunky, and there's so much scenery chewing -even for a melodrama - that every time I play it, I see bite marks on my TV.  (I'm looking at you, Betsy Joslyn...) Still, I'm glad it is preserved. I wish they had done the same with the LuPone/Cerveris revival.

4. Passion - Original Broadway Cast
Gorgeously filmed - it's like watching a moving painting, really. And the quality is both cinematic and intimate. It's also great that the original staging (underrated in my opinion) is saved for the ages. That the performances are great is obvious, but a great bonus here is hearing the commentary track featuring Donna Murphy, Jere Shea, Marin Mazzie and Sondheim himself.  It is insightful, honest and really funny.

3. Into the Woods - Original Broadway Cast
The entire original cast, a pretty straight forward filming that captures the sheer theatricality of James Lapine's staging, and Bernadette Peters rapping... what more could you ask for? Well, there's also the absolute perfection of Joanna Gleason as the Baker's Wife. Hers was among the greatest musical performances of all time. And I also appreciate that 99.99% of the time (save for a few minutes of Ben Wright's performance) there's no "extra" acting for the camera.

2. Company - Revival Cast
I loved this show when I saw it (both times), especially from the front center orchestra seats. This was a show that demanded you pay attention to the performers.  And their detailed performances were perfectly captured in this filming. Here, the show played on film just as it did in the theater. It is also proof positive that Broadway needs Raul Esparza and Barbara Walsh back and soon.

1. Sondheim! The Birthday Celebration
I love this soooo much. The ending, when the company fills the stage and the aisles of the Avery Fisher Hall at Lincoln Center to sing "Sunday," brings me to tears, as it did Mr. Sondheim. The all-star cast and the New York Philharmonic are unmatched.  It's hard to pick any one number as a favorite, so here's a few: "Move On" with Mandy Patinkin and Bernadette Peters, the hilarity of Patti LuPone with two Sweeneys, Michael Cerveris and George Hearn, doing "A Little Priest," and "You're Gonna Love Tomorrow," featuring four of my favorite performers: Jenn Colella, Laura Osnes, Matt Cavenaugh and Bobby Steggert. But the absolute highlight of the whole thing has to be when 6 of musical theater's greatest actresses - LuPone, Peters, Donna Murphy, Audra McDonald, Marin Mazzie and Elaine Stritch - dressed in red, take the stage and watch each other perform the greatest hits. And is there any better thing than Stritch giving LuPone a standing ovation after "Ladies Who Lunch"? How great that we have both Stritch and Mazzie at the top of their game preserved forever.