BROADWAY IN A BOX CD REVIEW:
Gypsy (1959 OBCR)
At Christmas a few years ago, Jeff gave me a copy of Broadway in a Box: The Essential Broadway Musicals Collection. He has now given me the opportunity to use his blog to share my impressions of each of the 25 cast recordings contained in the set, in alphabetical order.

This week’s entry is about the 1959 Original Broadway Cast Recording of Gypsy. 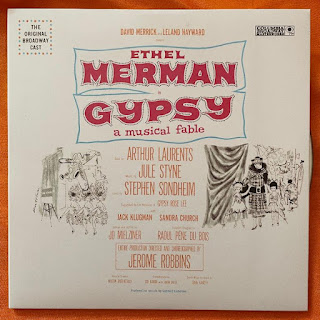 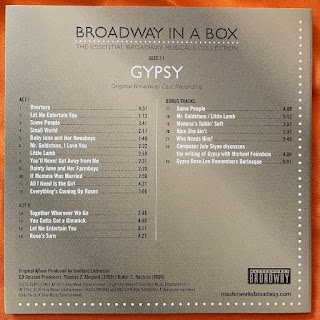 Sitting in the Broadway Theater in 1959 must have been a thrilling experience. Listening to the superhuman voice of Ethel Merman fill that huge space, inhabiting the larger-than-life character of stage-mother-from-hell Rose, would have been the theatrical experience of a lifetime. I’m sure I’m not alone in wishing I could have been there myself.

Unfortunately, listening to Merman’s performance on a boombox in my bedroom is not quite the same thing. On this recording, she mostly comes across as just loud. As my main point of comparison is the top-of-her-game performance of Patti LuPone leading a cast of fellow Tony-winners in the most recent revival, I was underwhelmed. Rose dominates this score, and I have to admit that getting through this CD was a bit of a chore because of that. Legendary songs that should be major highlights - “Everything’s Coming Up Roses” and “Rose’s Turn” - come across here as flat and lacking in nuance.

Other elements of the recording fare much better. One was obvious from the first majestic notes of the overture: the huge, brassy orchestra. Loud in all the right ways, but lush and lyrical when needed, it makes for a great complement to Merman’s out sized presence. (Orchestrations are by Sid Ramin with Robert Ginzler.) 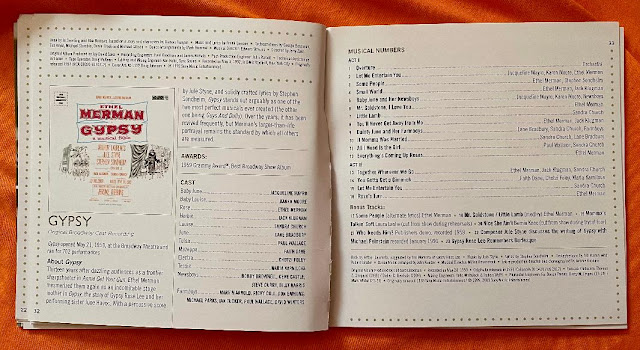 The remainder of the cast - with the exception of a screechy Jacqueline Mayro as Baby June - comes off much better on this CD. Sandra Church, as Louise, is a confident and sweet soprano, and her rendition of “Little Lamb” rivals that of Laura Benanti in the revival. Jack Klugman, as Herbie, doesn’t have too much to do on this recording, but his cheerful vulnerability comes through in “Small World.” Paul Wallace, in the smaller role of Tulsa, makes a solid impression opposite Church in the tender “All I Need is the Girl.”

This CD has a generous array of bonus material, including demo and rehearsal recordings of several songs that were changed or omitted from the final version of the show. One of these, “Momma’s Talkin’ Soft,” was cut during Broadway rehearsals but left its traces in a few bars of “Rose’s Turn.” There’s also a five-minute segment of an interview with composer Jule Styne, mostly discussing the contribution of lyricist Stephen Sondheim, whom Styne credits for his astute approach to the show’s lyrics.

While this CD, and Merman’s vocal performance, has now been eclipsed by the likes of LuPone, Bernadette Peters, and Tyne Daly, I’m glad to have listened to it as a historical document of an important point in musical theater history. I look forward to seeing and hearing the next diva who takes on the challenge of Momma Rose.
Next up is the Original Broadway Cast Recording of Hair.
Thanks, Mike! Glad to see even a legend doesn't stand in your way. I'm getting my fringe vest and peace beads ready for next week! -- Jeff
Posted by JK at 7:00 AM