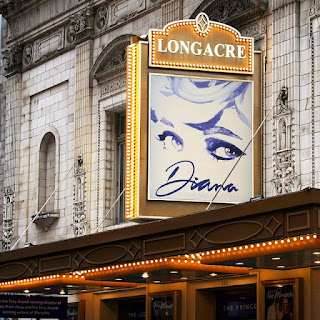 With the return of Diana to the boards (and to televisions across the country), here's game all about the royalty - real and fictional - that has trod the stages of The Great Bright Way.
Broadway Games:
Broadway "Royalty"
Can you name the show each came from?
1. Basilius & Gynecia may have been the King and Queen of Arcadia, but Princess Pamela really ran this show:
2. An affair made things interesting during the lusty month of May for King Arthur in this show:
3. Princess Winnifred, who was shy, couldn't get any sleep what with a pea under her bedding in this show:
4. "War is a science!" Charlemagne declared during this musical:
5. The Queen of Hearts has reigned terror over many a show, but she really created chaos in the Frank Wildhorn musical called:
6. Mufasa reigns over Pride Rock in this show:
7. Donna Sheridan was a dancing queen in this show:
8. Anne Boleyn advises audiences, "Don't Lose Ur Head!" in this musical:
9. Prince Charles introduces Camilla Parker Bowles to Queen Elizabeth in this show:
10. The Princess Puffer ran an opium den in this Tony-winning Best Musical:
Answers to Last Week's
BROADWAY GAMES:
CAREER-DEFINING &
SHOW-STOPPING PERFORMANCES
1. The King of Siam in The King and I J. Yul Brynner
2. Fosca in Passion I. Donna Murphy
3. Claudine in Can-Can  G. Gwen Verdon
4. Albin/Zsa Zsa in La Cage aux Folles D. George Hearn
5. Effie White in Dreamgirls N. Jennifer Holliday
6. Caroline Thibodeaux in Caroline, or Change A. Tonya Pinkins
7. Amanda Wingfield in The Glass Menagerie L. Laurette Taylor
8. Tevye the milkman in Fiddler on the Roof  K. Zero Mostel
9. Joanne in Company F. Elaine Stritch
10. Cassie in A Chorus Line C. Donna McKechnie
11. Bloody Mary in South Pacific O. Juanita Hall
12. Harold Hill in The Music Man B. Robert Preston
13. Celie in The Color Purple H. Cynthia Erivo
14. Eva Peron in Evita E. Patti LuPone
15. Willy Loman in Death of a Salesman  M. Lee J. Cobb
Posted by JK at 7:00 AM