I often blog that I wish I lived in New Yourk, or closer at least, so that I can attend events that only last a very short time, like the Encores! series or the Tony Awards.  One such event was the recent Company In Concert by the New York Philharmonic.  Well, good news for us, one of my most loyal and theatrically savvy readers, Mr. Martins, got to see one of the sold out shows and sent in this review!  Now I can't wait to see it at the movies... buy the DVD... 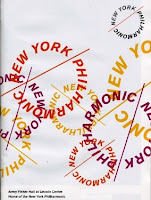 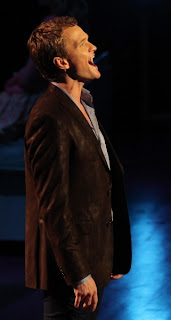 Bobby, baby!
Neil Patrick Harris
Neil Patrick Harris led this all star cast as Bobby, the perennial bachelor who is afraid of commitment and of being hurt. Harris is no stranger to Sondheim, having starred in the original Broadway cast of Assassins, his experience is apparent as he was able to sing the intricacies of Sondheim’s demanding score. While at times he lacked the vocal power of Dean Jones and Raul Esparza (the original and 2006 revival Bobby, respectively), he was able to pour his emotion into every song, especially “Someone is Waiting”, where Bobby yearns for a woman who is a composite of all his female friends, and “Being Alive”, the powerful anthem where he comes to the conclusion that “alone is alone, not alive” and is ready to face his fear of hurt, and finally find somebody (not some body). 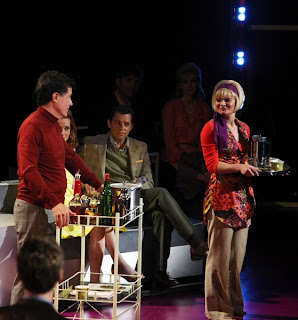 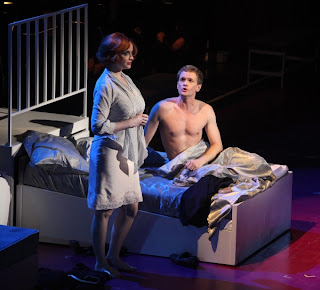 TOP: Stephen Colbert, Jon Cryer and Martha Plimpton
BOTTOM: Christina Hendricks and Neil Patrick Harris
The entire production was brilliantly staged, executed and polished. Ironically, for a musical concert presentation, the book scenes were excellently acted, while the singing was sometimes thin and drowned out by the impressive New York Philharmonic due to mic-ing problems and weak voices. Martha Plimpton, however, as the tender and foolish Sarah, was a stand-out who sang beautifully. (She’ll be cast as Joanne in the next revival, mark my words). Christina Hendricks, in her stage debut as the ditzy flight attendant April, brought a sweetness to the role that you couldn’t help fall in love with. Her thin soprano was perfect for “Barcelona”, and Hendricks made the song feel like a conversation with Bobby. 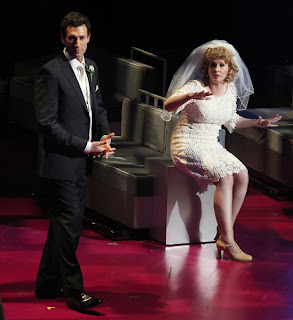 "Not Getting Married": Aaron Lazar and Katie Finneran;
"Another Hundred People": Anika Noni Rose
Katie Finneran stole the first act as the crazed bride-to-be Amy, not only in the hyperactive patter song “Getting Married Today”, but in the book scene that followed. Flubbing the final verse of the song, Finneran played it off well, and still won the heart of the audience. Anika Noni Rose deserves a special mention as the original Marta. Albeit singing the New Yorkers’ anthem “Another Hundred People” in the upper register, resulting in a vocally weak performance, she acted the song so well that her lack of belt and power was easily forgiven. 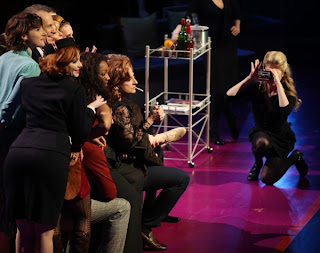 Isn't it warm, isn't it cozy?
The choreography by Josh Rhodes was clever and refreshing, and Lonny Price’s direction gave a new life to the show as a whole. The direction and choreography came to a huge payoff in “Side by Side by Side/What Would We Do Without You?,” the second act opening. Choosing a vaudevillian theme for the number, it was riveting to see Patti LuPone kick and dance her heart away, and to see Stephen Colbert carry Martha Plimpton and Neil Patrick Harris. The singing was strongest during this number, making it one of the gems of the night. 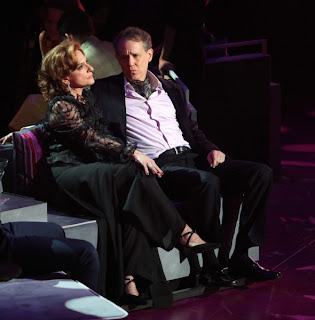 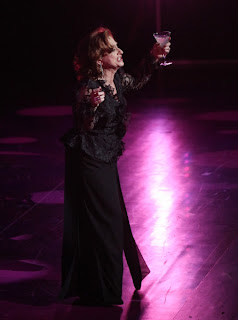 Patti LuPone and Jim Walton; Patti LuPone: "The Ladies Who Lunch"
Patti LuPone was the highlight of the night, as the acerbic and tough Joanne. Her Joanne was dark and looming – she never truly mingled with the rest of Bobby’s friends, always going the other way when her husband Larry (played convincingly well by Jim Walton) approached. LuPone’s “The Ladies Who Lunch” was one of those breathtaking moments. Not only could she fill the entirety of Avery Fisher Hall (for those who’ve been there, you’ll know this is no easy task), but she also ensured that every phrase and intonation was powerful and conveyed each heart-wrenching pang of vulnerability with ease. As she finished her diatribe with the climatic repletion of “Rise”, desperation was leaking through, shaking one to the soul. I’ll admit to crying as the song came to an end, and as the audience gave Ms. LuPone the night’s largest ovation. Interestingly enough, after discussing the number with group of theater-goers, there was disagreement about the her performance. Some (myself included) loved it wholeheartedly; others felt it lacked a certain spontaneity and emotion. One thing we all agreed upon was that Patti LuPone has amazing talent. 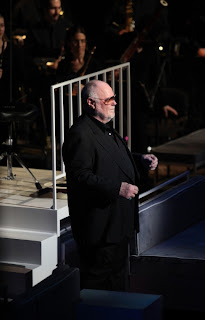 Maestro Paul Gemignani
The true star of the show, however, was Sondheim’s score played by the New York Philharmonic, and conducted by the legendary Paul Gemignani. To hear the score’s original orchestrations by such an  acclaimed orchestra was worth the price of admission and more. Sondheim’s genius came through in ways that the minimalistic John Doyle-helmed 2006 revival didn’t allow. It was fitting that Gemignani and the orchestra received the final bow and a standing ovation. The score to Company and the New York Philharmonic were the real stars of the show.  And that’s what it’s really about, isn’t it?

(Photos by Walter McBride from BroadwayWorld.com)

Seeing a show I haven't reviewed?  Email me and we'll talk about having you be a guest blogger!