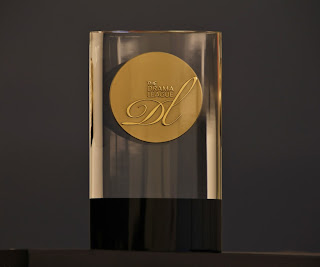 Well, the 2010-2011 awards season for theatre got its start yesterday when the nominees for the 77th annual award were announced yesterday by Catch Me If You Can star  Norbert Leo Butz and Kathleen Chalfant.  Both are former Drama League Award recipients.  The awards will be handed out at a ceremony on May 20, hosted by Kathleen Turner, a nominee herself for High.

Interestingly, a performer can win this award only once in his or her lifetime, though their name can appear on the dais as many times as deemed appropriate throughout their career.  This year, there are 7 previous winners who will be on the dais, but are ineligible for the ultimate award because they have already won it.  They are: Norbert Leo Butz, Catch Me If You Can, Stockard Channing, Other Desert Cities, Cherry Jones, Mrs. Warren's Profession, James Earl Jones, Driving Miss Daisy, Patti LuPone, Women on the Verge of Nervous Breakdown, Brian Stokes Mitchell, Women on the Verge of a Nervous Breakdown, and Geoffrey Rush, The Diary of a Madman.

Though hardly considered a precursor to the Tony Awards nominations, it does get names and shows "out there" and starts to remind folks of productions from the entire season - recognizing Laura Benanti, Patti LuPone and Brian Stokes Mitchell for their work in Women on the Verge of a Nervous Breakdown, for example, certainly signals that that show may be remembered by other awards coming up this season.  Verge was not among the nominees for Distinguished Production of a Musical.  Elf: The Musical, though, was, which is very interesting considering it came and went, albeit quite successfully, as a Christmas Show Special.

It should also be noted that Broadway transfers of Bloody Bloody Andrew Jackson, Brief Encounter, The Scottsboro Boys and Time Stands Still were nominated in 2010 for their original productions, and therefore, were not eligible for this year's awards.  The first three on that list were all nominated for Distinguished Production of a Musical, which could come into play for this season for other awards.  The entire ensemble of Brief Encounter was nominated (that show will be eligible in the Play categories of the Tonys this season), as was Bloody Bloody Andrew Jackson's Benjamin Walker.

Of course, it is also interesting to see what and who was NOT nominated this year.  No Women on theVerge, Wonderland, Baby It's You, Lombardi, Peter and the Star Catchers or That Championship Season for the production awards.  (Several performers from some of these productions have been recognized.)  No Sherie Rene Scott, Justin Guarini, Beth Leavel, Rose Hemingway, Colin Donnell, Joel Grey, Sebastian Arcelus, Kerry Butler, and perhaps most shocking, no Nick Adams.**

** After a cursory search for the nomination guidelines, all I could verify is that Broadway and off-Broadway productions are eligible.  From the list of performers, it may be only lead performances that are eligible, though some, like Tom Wopat in Catch Me if You Can  will likely be considered a featured actor, for other awards later this season.  So it could be that some of the missing performers are simply ineligible for this honor.  Either way, their lack of inclusion is both interesting and surprising.