There isn't enough time on the calendar or money in my bank account that allows me to see every show I want to see, be it on Broadway, off-Broadway or even locally.  Just trying to schedule all of the new musicals this season has been an exercise in craziness!  And so, I have asked a long-time reader and theatre friend of mine, Miss M, who seems to get to all of the shows I don't get to, to write up a review or two about major plays that have opened this season.  First up is the starry revival of Arcadia.  Next week, look for her thoughts on Good People!


Arcadia opens in a large room in Lady Croom's (Margaret Colin) English country house in Derbyshire called Sidley Park. The room is vast but not ornate. The ceiling is quite high and there are multiple doors on the right and left sides and on the back wall there are several French-type doors leading to the gardens, which are much spoken about but never seen. The room is dominated by a very large, very long wood table, at which are sat, on opposite ends, the tutor Septimus Hodge (Tom Riley) and his rather brilliant thirteen year old pupil, Lady Thomasina Coverly (Bel Powley). It is 1809 and Thomasina begins the play by asking her tutor to explain what “carnal embrace” means. It is just the first of many questions posed throughout the play, but not one that Septimus is inclined to answer. Instead, he directs her to try to prove Fermat’s last theorem, probably figuring it would buy him a good deal of undisturbed peace and quiet in which to continue his own work. It doesn’t. Thomasina’s questions and observations are endless, her thirst for knowledge and understanding insatiable. These questions and theories drive through the whole play, which alternates between the early 19th century (1809-1813) and the present day, where we find the descendants of Thomasina’s family, the (grown) children (Grace Gummer and Noah Robbins) of the current Lady Croom, as well as two visiting scholars (Billy Crudup and Lia Williams) doing research, in the same room. The set never changes, only the time period. One of these scholars is trying to piece together some of the events we have observed or heard described by the 19th century inhabitants and getting it thoroughly, comically, wrong. One of the descendants, Valentine (Raul Esparza), is working on some of the same theories that Thomasina worked on, having found her notebooks, only with the advantage of a computer to make the many calculations. 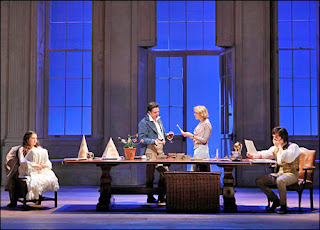 Two times at the same time: Bel Powley, Raul Esparza,
Lia Williams and Tom Riley
One could go into much greater detail about the specifics of the plot, but they are not truly what the play is about. Rather, Stoppard examines several fascinating and generally dichotomous themes, ideas, and questions. These include the relationship between the past and the present and between order and chaos- finding order within chaos and then chaos upending order. It’s about the challenges of historical research and the hazards of bending facts to fit theories instead of developing theories to fit the facts. It’s about the distinctly "human" quest, unending, for knowledge and understanding. And ultimately the play is about understanding that these dichotomous things and concepts can exist simultaneously. Stoppard uses the (overlapping) set, costumes, lighting and props (designed, respectively by Hildegarde Betchler, Gregory Gale and Donald Holder), and even the characters themselves to illustrate this idea. The play closes with the room occupied by the 19th century and current day characters, dressed similarly due to a period costume ball in the current day, a young actor (Noah Robbins) in dual roles thereby occupying both eras simultaneously, waltzing around the room. They are different, yet much the same, existing in the same space, and for a moment, however illusory, in the same time. 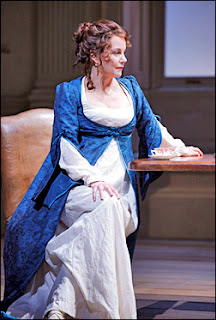 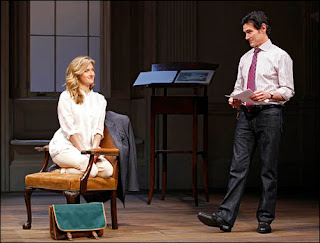 Top: Before: Margaret Colin
Bottom: After: Grace Gummer and Billy Crudup
A week and half since attending Arcadia, and I am still thinking about these ideas but less so the characters. This leads to me think that the play/production does a better job putting forth good ideas than creating interesting characters. The only two characters who have truly stuck with me are Thomasina and Septimus. This isn’t all that surprising, given how important they are, but it’s a little disappointing. I enjoyed both actors’ (Bel Powley and Tom Riley) performances very much. I also quite liked Edward Hyland’s performance as the butler. It’s not a large role, but the butler is important to the passing of information and,  therefore, the actions that stem from it. He was very funny. Raul Esparza was a primary reason I wanted to see Arcadia, as I’m a big fan of his, but I think he was miscast. I didn’t find him convincing as Valentine - he was just sort of "there." 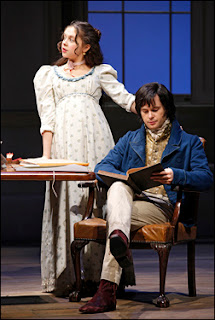 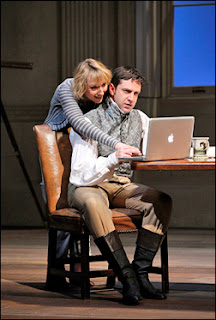 Then: Bel Powley and Tom Riley
Now: Lia Williams and Raul Esparza
The audience response, at least in the orchestra, was positive. The witty dialogue got strong and frequent laughter. A fair amount of people gave a standing ovation. I didn't overhear many negative comments during intermission or on my way out of the theater. Not all audiences are the same, obviously, but mine seemed to enjoy it. 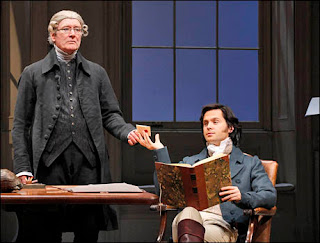 Edward James Hyland and Tom Riley
If you are looking for a play where sitting back and letting it just wash over you is enough, keep looking because this isn’t it. In this case, knowing what you want and what you’re in the mood for makes a big difference. But if you’re willing to put forth the effort the play demands, Arcadia, however imperfect, can be a satisfying, intellectually stimulating, entertaining night at the theatre.

If you've seen a show on or off Broadway, or a National Touring company of a show that I haven't covered, please write to me and we can arrange for you to be a possible Guest Blogger!

Comments? Leave one here, email me at jkstheatrescene@yahoo.com or Tweet me!
Jeff
2.214
Posted by JK at 12:01 PM