LOGOS: The People in the Picture

It is very rare that I am divided on a show logo, but that is definitely the case with Roundabout Theatre Company’s The People in the Picture. And since it has been completely overhauled, and they are resorting to ads that include a Donna Murphy head shot, I can only guess that whoever is in charge of their artwork is at a loss as to what to do with it. I have a suggestion: combine the two versions and skip the picture of Ms. Murphy. Her name above the title is all a theatergoer will likely need. (If they are trying to reach a broader audience, then I can say nothing more than “quit while you’re ahead.”) 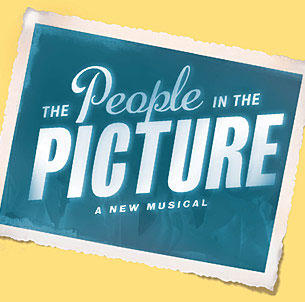 The initial artwork/title work was a simple thing, evocative and simple, perhaps too simple. But as a title alone, it works. The framed, bent-cornered image coupled with a faded, sometimes rubbed out light blue color is evocative of an old photo and of home. That light blue shade most definitely gives off a “homey” feeling; it personally reminds me of the color of plates my grandmother used to serve lunch on. (The darker blue, more detailed plates were, without a doubt, Sunday-only dinnerware!) Of course, by making the title on a “picture,” it references the title itself, while the typeset is old-fashioned and manages to be both familial and formal. And so, without so much as an icon, the title in this treatment at least tells us that the story has to do with family, and a few generations at the least given the “aging.”

Then, all of a sudden, the show logo emerged, and odd mix of interesting iconography and unattractive typeface. Now we have a very un-warm shade of purple against a beige/peachy-ish background, the title in places looks 3D, and a cold box lettering style throughout. I have to admit I simply do not get what they are doing with this titling; what I do know is that I don’t like it. It looks thrown together. Perhaps it is a compromise? No matter. It is ugly. 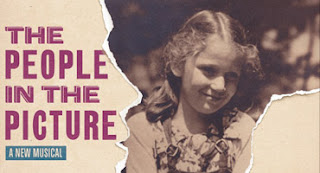 But then there is the image that goes with it. Purple-shaded sepia toned (to match, I assume, the title) photo of a happy, curly haired little girl in overalls. I think we can assume from the tones of color that it is meant to be an old-time photo, but she could be a child of today (my niece wears similar overalls at age 4). This, I think is interesting, as the story of the show goes back and forth between generations.

Even more interesting is the way the photo is presented. At first glance, it looks like a simply torn photo, which begs the question: who got torn out of the picture? And are the missing ones (+ the child) the “People in the Picture”? Then you look closer and notice that the torn corners are not just rips, they are silhouettes of people that look like they are looking at the child. The same questions remain, but much deeper. Are the torn “faces” contemporary people looking at the girl from the past? After all, the “tears” have to have happened AFTER the picture was taken. And the “tears” in the paper are white, not aged, hinting that they are more recently made still.

And so there is an enigma. Half of the logo works, the other half doesn’t. And as good as the part that works is, it isn’t THAT compelling to start with. I’d have gone with a “two photo” logo if it were my decision. One, the original title “picture” perhaps aged or stained, maybe “fastened” down with yellowing tape; the other the torn image of the girl, with some of it “under” the title, as if the photos had been stacked but are now askew. That would have created one cohesive title-image, and have made it more interesting.

As it stands now, only the name above the title interests me enough to buy a ticket. I guess it is a good thing Roundabout has a big subscription base.