Here is the second of two reviews of Broadway plays written by my good friend, Miss M.  Today, the show is Good People, currently enjoying an extended run at the Manhattan Theatre Club.  The buzz on this show is excellent; I'll probably be kicking myself for missing it.  So, thank you to Miss M for providing some insight into a couple of shows that I never got to, and for sharing your love of theatre with the rest of us!  I hope you'll write some more and soon!

This new hit play, written by David Lindsay-Abaire, features a truly excellent cast portraying a group of characters who can mostly be described as “good people,” despite their imperfections and mistakes. Good People uses these characters to explore class differences, social mobility, and what makes that mobility possible. How much of one’s success (or failure) is owed to others and/or to plain, dumb luck? Can one ever fully escape where one comes from?

The play is primarily set in south Boston, known as Southie, which is a rough area, largely Irish-American and accustomed to hard times. Margie, played by Frances McDormand, is perhaps more accustomed than most. In the opening scene, her young boss (Stevie, played by Patrick Carroll) at a dollar store is firing her from her cashier’s position because she arrived late yet again. We learn right away that the reason Margie is so often late is that she is a single mother, and the care-giver (Dottie, played by Estelle Parsons) she employs for her daughter is not terribly reliable. Moreover, her daughter, who is never seen, is a mentally-challenged adult. This is not the first job Margie has lost for this reason, and she is out of ideas and possibilities. The economic picture is bleak and options are few for those without skills and education. Becoming pregnant at 17 cut both of these short for Margie. 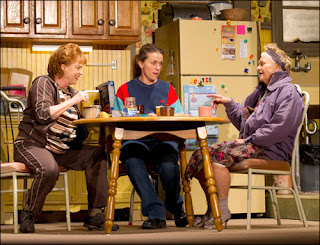 The gals of Southie: Becky Ann Baker,
Frances McDormand and Estelle Parsons
Margie’s friend Jean (played by Becky Ann Baker), informs her that Mike (played by Tate Donovan), an old high school boyfriend of Margie’s, is now back in the Boston area. He is a successful, established doctor with a much younger wife (Kate, played by Renée Elise Goldsberry) and child. He got out; he made good and seems to have never looked back. Margie is curious, envious, and in desperate need of a job. So she decides to pay Mike a call. It’s an awkward reunion. Mike has no employment to offer her but instead extends an invitation to his house (in posh Chestnut Hill) for a birthday party his wife is throwing him, raising Margie’s hopes that perhaps one of the guests will have a job for her. Once she decides to go to Chestnut Hill, nothing will stop her, not even a last-minute call that the party’s been canceled. What follows gets to the heart or the meat of the conflicts explored.

Is Mike “lace curtain Irish,” someone who’s forgotten where he comes from and doesn’t care about those left behind, as Margie accuses him of being? Is Mike’s success due entirely to his own efforts or did luck and other advantages play their part? Could Margie have experienced similar success with the same lucky breaks she believes he got? Could it have been her with Mike’s comfortable life? Has Margie put her own pride before possibly giving her daughter a better life? But if pride is all Margie had, do her decisions become easier to understand? 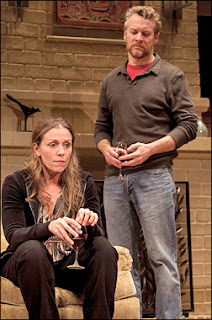 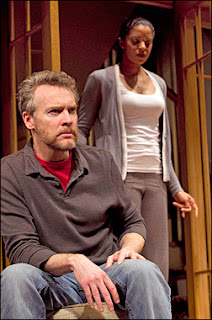 Mike (Tate Dononan) confronts his past (Frances McDormand)
and his present (Renee Elise Goldsberry).
While these questions could lead to a purely serious play, they don’t. The play is very funny, particularly in the first act. The second act turns darker, but there is still humor, even within the heart-pulling degeneration of events. The cast is top notch, playing very human characters, who I was able to understand even when they were not behaving like “good people.” Of the cast, Estelle Parsons plays her character of Dottie most broadly- the kooky old lady- but it works. McDormand, Tate, and Goldsberry give nuanced performances of layered, finely drawn characters. While I expected McDormand to be excellent, and she was, I was very impressed by Goldsberry’s portrayal of Kate. I’d only ever seen her as Mimi, in the final performance of Rent on Broadway DVD. Kate is about as different from Mimi as could be, and she proves an excellent, surprisingly disarming foil to McDormand’s Margie. 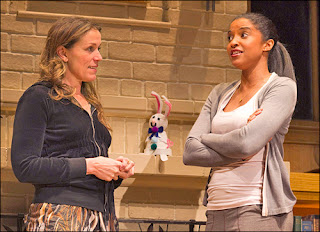 Margie meets Kate
The play uses multiple sets, placed on a turntable, making it easier and faster to transition between them. They are realistic and detailed, evocative of the atmosphere and circumstances they represent. (Set design by John Lee Beatty, lighting design by Pat Collins, costume design by David Zinn) They make a nice change of pace from the modern/minimalist sets and staging I’ve so often seen of late (which have their purpose and can be used to great effect; I’ve simply seen a lot of those lately). In transitioning between scenes, a sort of black curtain is used. It’s like a black box closing in on the scene, sort of like television, making the scene/set increasingly smaller until it closes/disappears. While it’s true that the first few scenes contain a fair amount of necessary exposition, I thought the play moved at a good pace throughout. (Direction by Daniel Sulivan) Audience response was very positive and enthusiastic. I don’t think there was an empty seat in the theater. 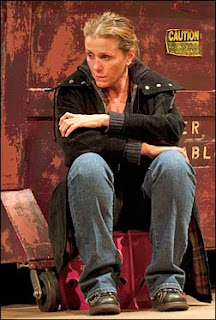 Frances McDormand's performance
has a lot of Tony buzz this season.
Though probably not the most original or innovative play you’ll ever see, it’s a solid, well-written play, fantastically executed, very relevant to the current economic climate, and a satisfying, thought-provoking, entertaining night (or afternoon) at the theatre. I would not be the least surprised if Good People and McDormand win the Tony.