This week’s entry is about the 1968 Original Broadway Cast Recording of Hair. 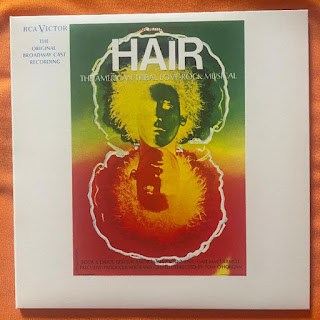 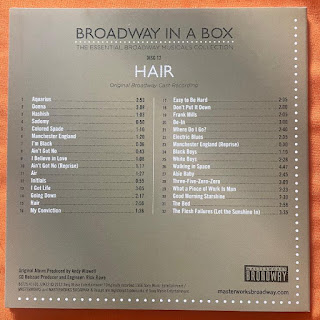 I became a huge fan of the American Tribal Love-Rock Musical Hair through its most recent revival, seeing the production on Broadway and twice on tour. While this original cast album did not match that experience for the laughs and tears it inspired, it was very satisfying hearing this score as it was originally intended to be heard, as an authentic product of its time.

The cast is mostly top-notch; I’ll summarize my thoughts of those playing the larger roles, in alphabetical order:

While this recording has many virtues, and I was glad to finally hear it after years of exposure to the show, I have to admit that the experience wasn’t quite as satisfying as I had imagined it would be. Some of that, without a doubt, has to do with the way the show has evolved into the version I am familiar with. While I don’t expect (or want) the show to sound like the Fifth Dimension, newer versions have a somewhat fuller instrumental sound and, especially, more sophisticated vocal arrangements that make the music more interesting to listen to. In addition, without the guiding hand of someone like Diane Paulus, the many moving parts of this show can seem to move in different directions - though I appreciate that this is probably a deliberate feature of the creators’ vision. 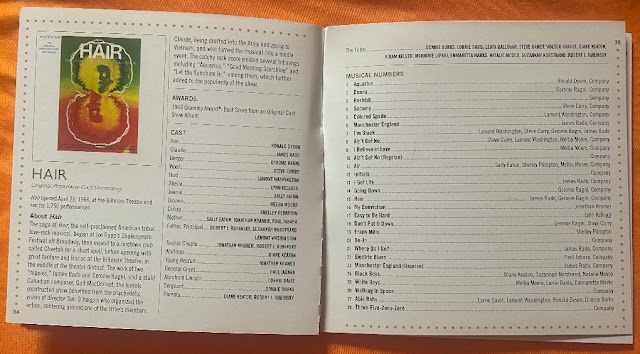 To some extent, however, Hair is just one of those shows that needs to be seen, and is harder to appreciate when it’s only heard. With dozens of mostly very short musical numbers that swing wildly in topic and tone, it can be hard to apprehend what the show is really about, or that the people we’re hearing really are a cohesive unit. This is obviously much clearer when we see them interacting on stage, but without that sense of community, we’re left with a seemingly random collection of songs, some of them very beautiful and most of them very odd. Also, at least fifty percent of the lyrics seem to be lists of various things, from sexual taboos to environmental pollutants.

To be clear, this recording did not damper my appreciation for the importance and impact of the show. It just made it clear to me that, with the exception of several “hit songs” from the score, the achievement is more theatrical than purely musical.

Next up is the Original Broadway Cast Recording of Hello, Dolly!