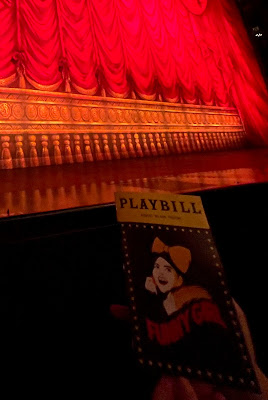 Review of the Saturday, April 2, 2022 evening preview performance at the August Wilson Theatre in New York City. Starring Beanie Feldstein, Ramin Karimloo, Jared Grimes and Jane Lynch with Peter Francis James, Debra Cardona and Toni DiBuono. Music by Jule Styne. Lyrics by Bob Merrill. Book by Isobel Lennart. Revised book by Harvey Fierstein. Scenic design by David Zinn. Costume design by Susan Hilferty. Lighting design by Kevin Adams. Sound design by Brian Ronan. Orchestrations by Chis Walker. Tap choreography by Ayodele Casel. Choreography by Ellenore Scott. Direction by Michael Mayer. 2 hours, 40 minutes, including one intermission. Grade: B-
Fair or not, the ghosts of Funny Girls past loom large over the revival of Funny Girl which opened on Sunday. Most of the expectation is probably fueled by memories of a stage show that exists for most of us in the form of the Original Broadway Cast Recording (a true classic) with its Tony-nominated star, and for very few fans in the form of the actual show from some 58 years ago. But the specter of the film version, and its Oscar-winning star, will fuel most comparisons. 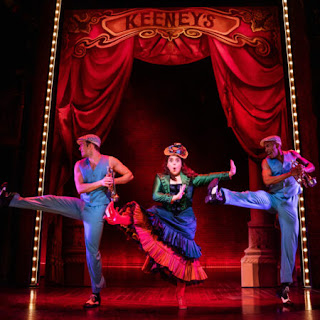 For what it's worth, I have seen only the stage version, and that was a local dinner theater production in the mid-80s, and have only limited exposure to the OBCR, so I feel like I came into this revival with a pretty clean slate and the desire to see some of my favorite performers. To that end, I wasn't too disappointed - they delivered as expected. Unfortunately, "as expected" in some cases wasn't enough.
First the good news. The hard working, hard dancing ensemble is top notch, recalling Broadway ensembles of yesteryear with skill and fervor. Big smiles, cute period affectations and fine precision abound as this terrific group navigate the challenging requirements of Ellenore Scott's full-out Golden Age choreography. 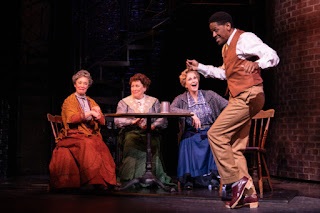 The major supporting cast members are each wonderful in their own ways, while maintaining old school music comedy style with such uniform gusto it feels nostalgic, not cringe-y. Jane Lynch, long a favorite personality of mine, does not disappoint. She manages to make the role of Fanny's mother fuller than the dialogue of Isobel Lennart/Harvey Fierstein's book provides. Sure, she uses her patented acidic line delivery throughout, but she also skillfully mixes in a warmth and a protective sincerity that helps ground the show when things get otherwise emotionally extreme. As her two partners in crime, Toni DiBuono and Debra Cardona are perfectly paired with her. They rule the neighborhood roost with wit and wisdom; I'd love to be a fourth in their poker games. 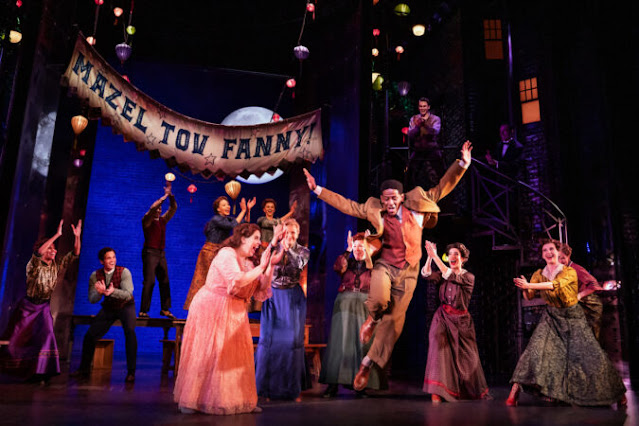 With this show, Jared Grimes will, I hope, finally become the major triple-threat star he deserves to be. A veteran of several shows as both dancer and choreographer, Grimes is an amazing tap dancer -  which tap choreographer Ayodele Casel brilliantly uses to the show's advantage. The man oozes charm in such volume that he steals every scene he's in - I couldn't help but watch his every move. 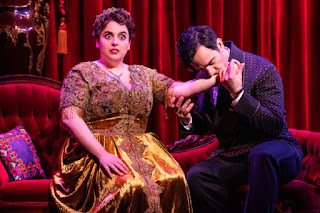 The other big find in this production is leading man Ramin Karimloo as shady good-guy Nick Arnstein. What an absolute delight to see his charisma in full effect and up close! The aw shucks grin and dimples combined with a soft-spoken voice and suave delivery are swoon-worthy, and he makes it easy to see why Fanny falls for Nick instantly. With this performance, Karimloo has set his career on a path to include not just the Jean Valjeans and Phantoms, but also traditional musical comedy leading man roles. He's funny and dramatic and is a terrific dancer. (Guys and Dolls revival, anyone?) Even with all of that, perhaps the most significant hallmark of his winning performance is the palpable chemistry he has with his leading lady. 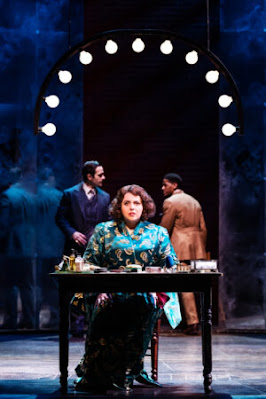 Which brings me to Beanie Feldstein. The good news here is that her charismatic charms seen on film are just as evident live on stage. There may not be a harder working actress on Broadway today. Maybe some of that is the demands of the part - an imposing mother of a role. And probably some of that may also be that early preview way actors have of worrying over hitting all their marks and beats while letting it become muscle memory. But, at least when I saw it, she was working way too hard, overselling at every turn, pushing for every laugh. Feldstein is game for pretty much anything, be it broad physical comedy (rolling off furniture, for example), boffo comedy dances surrounded by lithe chorines, or going toe-to-toe with her mother. That is definitely in her wheelhouse, and I suspect (hope) that with a few months under her belt, she'll be more at ease and it'll flow like butt-ah.
All of that said, it is her singing that brings down an otherwise (potentially) winning star turn. She can carry a tune, and do character voices just fine, but when it comes to the biggies - and let's face it, they are why we are all there - she tries valiantly, but doesn't hit the target. Her high school ingenue singing voice comes across as adolescent Shirley Temple with "People," and that nasally, pinched nose tone makes "Don't Rain On My Parade" fizzle. The de rigueur screams and cheers at the start of the song were somewhat less appreciative as the song ended and the act one curtain fell. Inexplicably, her act two reprise was considerably better. Why didn't she bring that the first time? It wouldn't be fair to expect anyone to be as iconic as the role's originator, but I find it hard to believe they couldn't find someone who could bring the whole package to the stage. 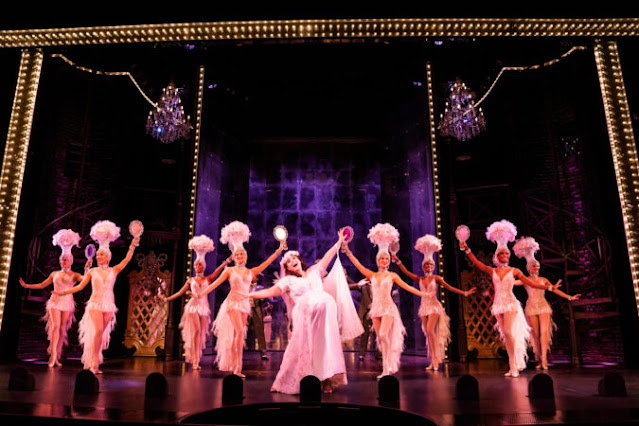 Still, this is a handsome, sturdy production with Susan Hilferty's gorgeous period costumes and Follies couture, and David Zinn's ever revealing, ever revolving set, and the kaleidoscope of colors provided by Kevin Adams' dazzling lighting. Director Michael Mayer's direction is tight, if unremarkable, and keeps things moving at a pace that makes the show's two hour, forty minute running time seem like much less. At the beginning of the show, as Fanny remembers her life, figures from her past float in and out Follies-style. Would that more of that kind thing happened to create something a little more interesting to look at.
I think it is fitting that this revival has opened on Barbra Streisand's 80th birthday. Not only does she loom large over the show, but she's a living reminder that you can be older and still be a risk-taker. As good as this Funny Girl is, it might have been even better with a few more risks. It feels more 1964 than 2022. Not a bad thing necessarily, but a dash of modernity would have made something this good, great.
📸: M. Klein, M. Murphy
Posted by JK at 12:00 AM