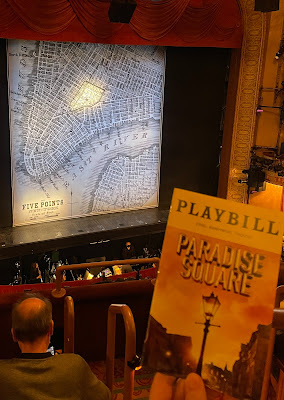 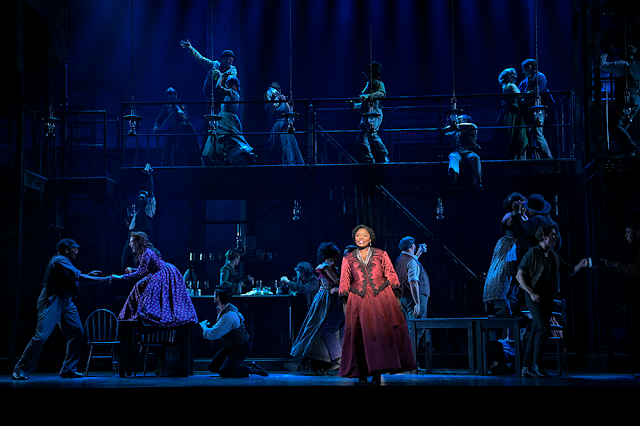 Both a powerful historical drama and a sobering commentary on our country's current state of affairs, the show wears its heart and its morals on its Union blue sleeves. And while the book (by Christina Anderson, Craig Lucas and Larry Kirwan) isn't exactly subtle in its themes, it is still emotionally satisfying. To its credit, the book manages to introduce ten major characters and several plot lines in such a way that is crystal clear and without confusion, not to mention a couple of interesting plot reveals in act two that were compelling despite being somewhat obvious in hindsight. With so much going on, it is remarkable that the show rarely drags.
This original new score (music by Jason Howland, lyrics by Nathan Tysen and Masi Asare) is really quite good. The team has concocted numbers that embrace both the Irish and African rhythms and motifs, separately, and, importantly, together. How nice to have a score that actually fits the time and theme of the show it supports! The rousing anthems, sweet ballads and show-stopping arias are by turns exciting, clever, emotional and always lyrical. 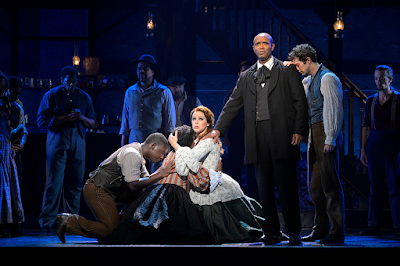 That's not to say that the whole thing is without bloat. It is in the otherwise lovely to rousing score that the production feels unnecessarily excessive. Both of us felt that while none of the songs needed to be cut completely, we agreed that nearly every song would benefit by a cutting of about 1/4 each - maybe a verse or two less, maybe a shorter dance break. Some of the repetition was certainly unnecessary.
Visually, the technical elements work well together, evocative of the 1863 time period and claustrophobic as America's first slum must have been. Between the heavily populated side towers and the rotating bar/brothel main set piece (designed by Allen Moyer), the moody shadows and piercing beams of lights (by Donald Holder), and the lavish period costumes (by Toni-Leslie James), Paradise Square comes to life with a pulsing vitality.
In a production of this size, it is more a compliment than not to say that Moises Kaufman's direction is serviceable; there are a lot of moving parts, and the show is mostly well-paced and always clearly focused. Is it a groundbreaking staging? No. But it is well done. Where the staging really soars, though, is in the brilliant choreography of Bill T. Jones, who could very well add another Tony Award to his shelf with his work here. As with the score, when styles need to be separate, they are, showcasing the individual complexities of each, either Black American traditional or Irish step dancing. But it is when they come together, that the true beauty of cultural diversity coming together virtually explodes off the stage. The company of dancers is remarkable in a way rarely seen these days. They are yet another case for adding an ensemble accolade to the Tony Awards. 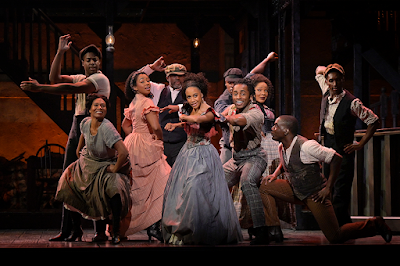 It is the impeccable cast that really elevates the show, making any of the piece's shortcomings (and long windedness) practically an afterthought.
In smaller but pivotal roles, four actors provide highlights of the emotional ride of the evening. Broadway veteran Matt Bogart lends his imposing physique and golden voice in the role of a Union soldier headed into the fray, and our heroine's husband. Their duet, "Since the Day I Met You," is beautifully sung. As the permanently maimed soldier returning from the war, Kevin Dennis imbues his tragic character with a palpable seething anger that is chilling. Coming in like a whirlwind, Jacob Fishel provides some much needed comic relief in act one, and a more nefarious plot twist in act two. Then there's Gabrielle McClinton, whose poignant portrayal of another runaway slave is both brave and sweet.
Both John Dosset and Chilina Kennedy play broad characters that teeter precariously on the line of caricature - he's Tiggens the villain, missing only a handlebar mustache to twirl while giving an evil laugh; she's Annie the bawdy, feisty Irish gal with the quick temper, sharp tongue and a heart o'gold. It is to their credit that neither is an offensive stereotype; rather, both give the show jolts of energy. As a perfect counterpoint to Kennedy, Nathaniel Stampley is a brilliantly understated tower of strength as Annie's preacher husband, and a conductor on the Underground Railroad. 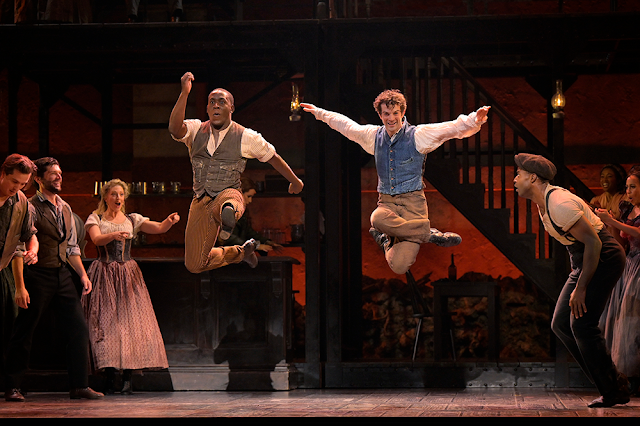 Setting up one of the show's central conflicts are A.J. Shively as an energetic, passionate fresh-off-the-boat (literally) Irish immigrant, and Sidney DuPont as runaway slave, Washington Henry. Separately, they are very compelling and hard not to watch even when they aren't the focus of the scene. But when they are together - often as song and dance rivals - that they create real Broadway magic. Both are superb dancers and powerful singers. I already look forward to seeing them in their next show.
The must-see performance of the season belongs to Joaquina Kalukango, who is nothing short of mesmerizing. A tower of strength, a paragon of virtue and a Black woman community leader in a white man's world, her Nellie O'Brien is a steamroller. You wouldn't want to tangle with her, but you'd do just about anything to be her friend. Ms. Kalukango also delivers the aria of the year - of the last several years - with the showstopping 11 o'clock number, "Let It Burn." This is the kind of star-making turn that people will be talking about for months. 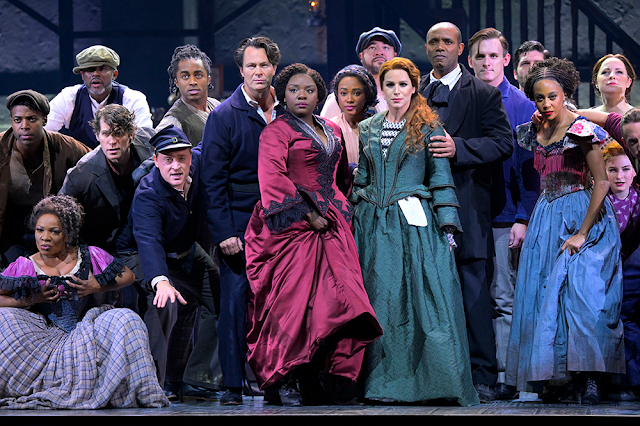 The beginning of Paradise Square starts with filmed current images of the area of lower Manhattan where Five Points once was. Nellie watches. The juxtaposition of those incongruous images is a jarring one. And it is a perfect metaphor for not just the show, but for America in 2022. Everything changes, and nothing changes. And a Black woman is there to keep the peace and to keep everything together.