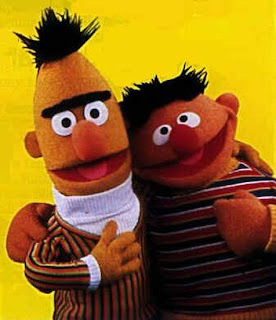 Today's blog has nothing to do with theatre, but it has a lot to do with drama - unnecessary drama in my mind.

I grew up a part of the Sesame Street generation, and I think I'm a better person for it.  Growing up in rural upstate New York, Sesame introduced me to the urban lifestyle (people that weren't related lived in small parts of bigger buildings?), people that weren't white (Maria was the first Hispanic woman I'd ever seen - and she didn't always speak English!), interracial relationships (before Maria married Luis, she and David - an African-American man - had eyes for each other), imaginary friends, grumps, monsters that were friendly, and the value of the dollar (R.I.P. Mr. Hooper).  These days, they continue to meet the needs of today's children - soon a Muppet whose father is in jail will be introduced.  Many of these lessons were overt, outright teachable moments, others were far more subversive - never discussed, just "there" to see as a normal part of every day life. 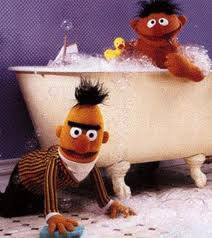 Most kids of my generation flocked to all things Grover, Cookie Monster and Big Bird (this was long before Elmo took over the Street).  I had a thing for Bert and Ernie.  I never knew why when I was 5 or 6.  I just loved them.  I know part of me identified with them as having a brotherly relationship, and I wanted a brother so bad I used to ask Santa for one every Christmas.  As I got older, I loved their very close friendship - they used to talk each other through problems as they laid in bed, waiting to drift off.  When one was scared, the other was there.  And how cool was it that Bert was perfectly welcome in the bathroom while Ernie and Rubber Ducky were taking a bath! (My mother still credits Ernie with getting me to take baths as a child.)  Bert and Ernie were the best brothers/best friends in the world, and I wanted that more than anything.

Mind you, I was blissfully unaware of sexuality at the time.  I Love Lucy reruns featured a loving, married couple who slept in separate beds and they had Little Ricky.  Prime time featured Darren and Samantha and Mike and Carol (both couples with children) sleeping in the same bed, just like my mom and dad did.  So what if Bert and Ernie slept in separate beds like Ricky and Lucy?  They loved each other just as much the Ricardos, Bradys and Stevens did.  Love is love no matter what the sleeping arrangements are.  Right? 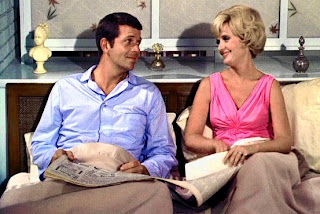 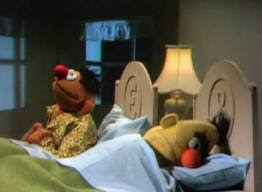 Now, as a grown up gay man, I think I understand why part of me was so drawn to the orange and yellow boys who lived together.  Because even then, as a 5 year old, I knew that two guys living together was as normal as a black family living with an Hispanic family in the same building and their being harmonious friends was.  I didn't need a story or big lesson - it was just there, two guys living their lives together, a part of the fabric of Sesame Street.  But the sexual aspect of it - even when they were sharing bathtime - was never a part of it.  Not the mechanics of it, anyway.  It shouldn't be, either. 5 and 6 year olds don't need to know the sex part of relationships.  But they NEED to know about the love and acceptance of all relationships.  And Street does that so well. 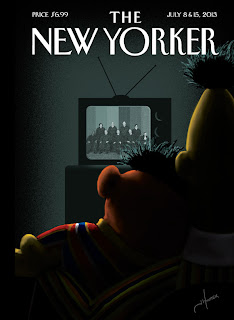 I've never been disappointed in the Children's Television Network and eveything it has stood for for decades, until I read a re-issue a 2011 statement on the subject, which has made it into current media following the release of a cover on The New Yorker following the Supreme Court decisions of the past week.  They said: "They were created to teach preschoolers that people can be good friends with those who are very different from themselves,” the 2011 statement said. “Even though they are identified as male characters and possess many human traits and characteristics (as most Sesame Street Muppets do), they remain puppets, and do not have a sexual orientation.”  That they ever felt the need to issue such a statement saddens me.  A company celebrated for its ground-breaking inclusiveness suddenly becomes a turtle hiding in its shell?

Sorry, folks, but the minute a Muppet is given a gender, sexual orientation is a part of the package.  It doesn't ever need to be directly addressed on the show.  In fact, I don't think it should.  But, rather, just as it always has, Sesame Street should continue to portray all kinds of couples in loving relationships as completely normal and part of life.  If a straight boy sees Bert and Ernie as best friends living together, cool.  If a gay boy sees Bert and Ernie as boyfriends or husbands living together happily, cool, too. Keep their beds apart, what does it matter?  Males, be they human or Muppet, can and should hug each other in emotional moments.  Hugs are not sexual.  Bert and Ernie could be sharing a hug and nothing more.

Having a Muppet with a father in prison addresses the needs of a portion of their audience.  Fine.  Instead of denying the possibilty that Bert and Ernie could love each other "that way," why not address the needs of the growing number of kids with same-sex parents?

And about that magazine cover: 1. If your 5 year old is readingand commenting on The New Yorker, whether Bert and Ernie are gay better be far down your list of issues to deal with.  2. (And more seriously) In light of the decisions by the Supreme Court, we see them as holding each other happily.  The same cover could have been used had the decisions gone the other way, only we'd see them as holding each other sadly.  I don't know about you, but I love my Muppets - gay, straight or otherwise - happy.