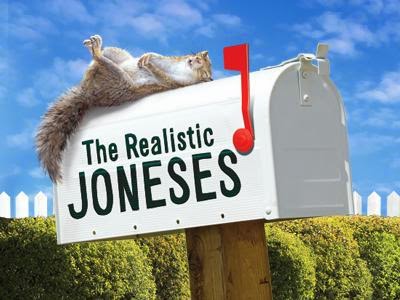 THANK YOU TO EVERYONE WHO ENTERED!  THIS CONTEST HAS ENDED AND THE WINNER CHOSEN.  LOOK FOR ANOTHER CONTEST SOON!

I am so excited to give you readers a chance at an extra special prize this time around!  Oh, I'm still giving away two passes to a Broadway show.  BUT those tickets will get you into a "Broadway Insider" event at one of the season's truly most hotly anticipated plays, The Realistic Joneses!  The event?  The INVITED DRESS REHEARSAL!  That's right, fans, the invited dress rehearsal, generally held with only friends and family in the house, BEFORE ANYONE ELSE GETS TO SEE THE PLAY! You must enter by Friday, February 14, 2014 at MIDNIGHT.  See details below.


THE PRIZE
Two passes to the Invited Dress Rehearsal of The Realistic Joneses on Wednesday, March 12 at 8PM!

What do you really know about your neighbors? This spring, TONI COLLETTE, MICHAEL C. HALL, TRACY LETTS, and MARISA TOMEI invite you to find out! The Realistic Joneses is written byPulitzer Prize finalist Will Eno, and directed by Sam Gold (Fun Home). Starring Academy Award nominee Toni Collette (Muriel’s Wedding, Hostages), Golden Globe winner Michael C. Hall (Dexter, Six Feet Under), Tony Award winner Tracy Letts (Who’s Afraid of Virginia Woolf, Homeland) and Academy Award Winner Marisa Tomei (My Cousin Vinny, The Wrestler) star in The Realistic Joneses, the new play about love and life, friends and neighbors. It’s an outrageous, inside look at the people who live next door, the truths we think we know and the secrets we never imagined we all might share.

THE CONTEST
1.  Toni Collette last appeared on Broadway in:

2.  Michael C. Hall has been on Broadway in which musical revival:
A. Cabaret
B. South Pacific
C. Damn Yankees
D. Guys and Dolls

3.  Marisa Tomei appeared in which Broadway play with Al Pacino:
A. The Merchant of Venice
B. Glengarry Glen Ross
C. Hughie
D. Salome